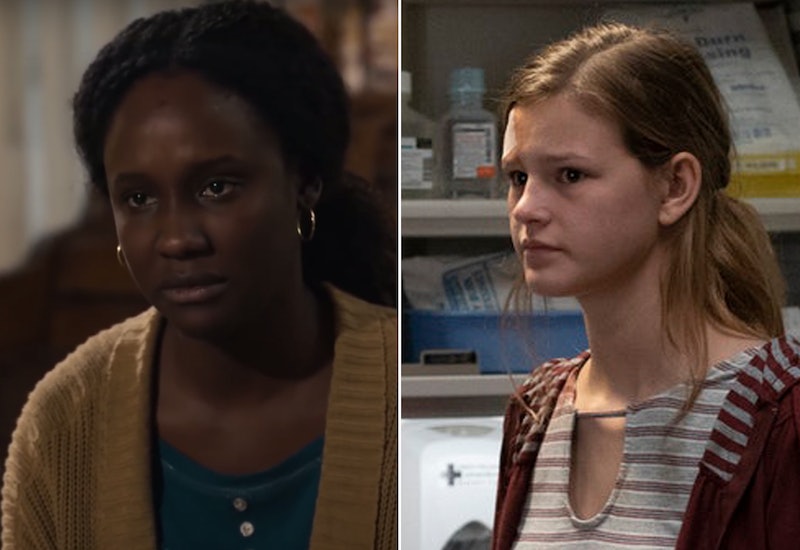 Let's play a game: List three examples of women characters with a name, dialogue, and a plotline who use opioids on TV or in a movie. Kinda hard, right? Netflix's Recovery Boys, Steve Carrel and Timothée Chalamet in Beautiful Boy, or the tragic, unsettling, cult favorite tale of Jared Leto's Harry in Requiem For A Dream may come to mind. But as powerful and unique as these representations are, they are all also primarily centered on the male experience. Sadly, the representation of women with opioid use disorder on television and in film is severely lacking, especially when it comes to women of color and LGBTQ women, and what few depictions are out there are plagued by stereotypes.

The lack of stories about women with opioid use disorder isn't just frustrating — it's risking real women's lives. Representation is a powerful thing, especially when it comes to raising awareness and dismantling stigma of all sorts of issues, and it could be beneficial for women who misuse opioids as well.

"When [women with opioid use disorders] think about seeking help, they’re going, 'Well I don’t look like the stereotypical “addict” or heroin user, so how do I fit into the treatment system?'" Jenifer Talley, PhD, assistant director of the Center For Optimal Living, a New York City based harm reduction treatment center, tells Bustle.

The lack of representation is particularly glaring when you take into consideration that rates of opioid use among women are disproportionately rising when compared to men, according to the U.S. Department of Health and Human Services' (HHS) Office on Women’s Health (OWH). Women are physiologically more prone to substance use disorder in general, and more likely to be prescribed opioids for chronic pain (Black, Native, and other women of color are less likely to be prescribed medicine for pain overall, but more likely to become dependent on opioids, according to the National Institutes of Health). Women are also more likely to have experienced some sort of physical or emotional trauma that can lead to substance use, according to Dr. Jennifer Rogers, PhD, assistant professor of counseling at Wake Forest University whose research focuses on substance use screening and intervention.

All that is to say there are more than enough nuanced and compelling stories for television and film creators to tell.

Still, Rogers tells Bustle that in the media, the "stereotypical person with an opioid use disorder is a rural, Appalachian, white man." That may be what some people who use opioids look like, but the truth is that who uses opioids, and where and why they do so, is much more complex. That complexity is often explored in male characters who use opioids, as in the projects mentioned above, as well as others like Bubbles in The Wire, Christopher in The Sopranos, or Seth in 6 Balloons.

But when it comes to women, forget about nuance. Viewers may see an unnamed girlfriend, inexplicably nodding off on an old couch, often half-dressed, next to male characters who have names, narratives, and dialogue. Think "Spooge's Lady" in Breaking Bad, or the unnamed woman who pulls a gun on Beth (Christina Hendricks) and Ruby (Retta) in the "Thelma & Louise" episode of Good Girls, when the leads break into a drug dealer's house to reclaim a pill stash.

If a woman with opioid use disorder isn't portrayed as an unnamed girlfriend on TV and in movies, then she's usually painted as a neglectful mother. This is one of the most damaging and painful stereotypes, according to Rogers, because it flattens all of the nuance behind why a woman uses opioids and why she doesn't ask for help, as well as what happens when a mother is separated from her children.

"It's a cultural, patriarchal shorthand [way of] saying, ‘Oh look at this woman, she’s a horrible mother, she’s an addict, and she’s not taking care of her children,'" Rogers says.

There are endless examples of this trope, including some recent ones on cable TV. Betty (Peyton Kennedy) from Grey's Anatomy is a runaway who uses heroin and is essentially forced to give up her newborn to her sponsor, Amelia (Caterina Scorsone). Deja's mother, Shauna (Joy Brunson), from This Is Us uses heroin to manage the trauma of having her daughter taken away. Shauna then feels so ashamed and guilty about her "failures" as a mother that she asks Randall (Sterling K. Brown) and Beth (Susan Kelechi-Watson) to adopt Deja (Lyric Ross), because she lost any hope that her sobriety would last long enough for her to be able to provide for daughter the way the Pearsons could.

Although these particular characters are arguably more humanized than other representations of women who misuse opioids on television or in movies, they still rely heavily on tropes. The characters are written with a lack of understanding of the "myriad psychological variables that influence each individual person’s experience," Rogers says.

What representations of women with opioid use disorders on TV and in film really fail to acknowledge is underlying trauma, according to Talley. This may be best understood by looking at non-fictional depictions of women with opioid use disorder on reality shows, like Intervention or Teen Mom. While viewers are meant to get an "in-depth" look at the cast members' lives, the reality TV format inevitably lends itself to spectacle and, again, misses the complexities of the subjects' situations.

"Trauma is the main reason someone ends up with a substance misuse disorder," Talley says. According to the National Institute on Drug Abuse, post-traumatic stress disorder is prevalent among people who misuse drugs, and as much as 80% of women who are seeking treatment for their substance use disorder report histories of physical or sexual abuse.

But the most egregious issue with depictions of women with opioid use disorder, according to both Talley and Rogers, is that it has been hammered into viewers' heads that "addiction" is an all or nothing scenario. This is something even the lauded Shonda Rhimes perpetuates on Grey's Anatomy with Amelia's character.

Amelia mentions off-screen narcotics anonymous meetings, but all viewers really know is her backstory as Derek Shepard's hot mess sister. Fans don't see the real work that goes into maintaining her sobriety, or even how she managed to reach that point in her recovery. Think about how much richer her character could be if fans saw even half as much about Amelia's opioid use disorder on screen as they do about Richard Webber's alcohol use.

Talley says that in pop culture, a substance use disorder tends to be presented as a "permanent disease" that someone will live with forever, the only solution being total abstinence. That means any relapse is considered a failure or reflects a desire to not want to get better, much like viewers saw in Nurse Jackie. Edie Falco's character on that show has to prove her worth to coworkers and family over and over after being forced into a rehab center that she didn't want to go to in the first place.

Talley notes that while 12-step programs work for some people, it "doesn't resonate with everyone." For that reason, she says the depiction of opioid use in shows like Nurse Jackie "is such a problem because I think that can be disempowering for people, it can further create stigma and shame, and then have this negative impact on help-seeking."

Talley would like to see more options on TV and in movies for the ways women (and men) can manage their opioid use disorder, such as harm reduction therapy. Harm reduction therapy takes an honest look at how to treat substance misuse, and often involves steps like providing sterilized tools and overdose reversal medication, sometimes encouraging a person to use less rather than demanding they immediately stop using entirely.

Along with the "abstinence is the only answer" trope, both Talley and Rogers worry that onscreen depictions of women having to hit "rock bottom" before getting help prevents people from seeking treatment for opioid use disorder. Perpetuating the idea that "rock bottom" is when it's time to get treatment could lead to fatal overdoses, Rogers says, because people didn't think they should ask for help sooner.

The bottom line is that viewers internalize the images and messages they see onscreen, and depictions of women and opioid use are harming real-life women every day. More nuanced and diverse stories about what women with opioid use disorder really look like and what they go through could not only bust stigma — it could literally save lives. Something as simple as writing more complex and nuanced women who misuse opioids into scripts could help mitigate the scope and the effects of the opioid epidemic; it's certainly not the answer, but it is a start.

More like this
Gassed Up Promises All Things Action, Risk, & Redemption
By Frances Stewart
Taylor Swift Wanted To Be In 'Twilight: New Moon,' According To Its Director
By Grace Wehniainen
Jonah Hill Explains How His Anxiety Attacks Will Change The Rest Of His Career
By Grace Wehniainen
Here’s Where Manti Te’o Is Now
By Arya Roshanian
Get Even More From Bustle — Sign Up For The Newsletter