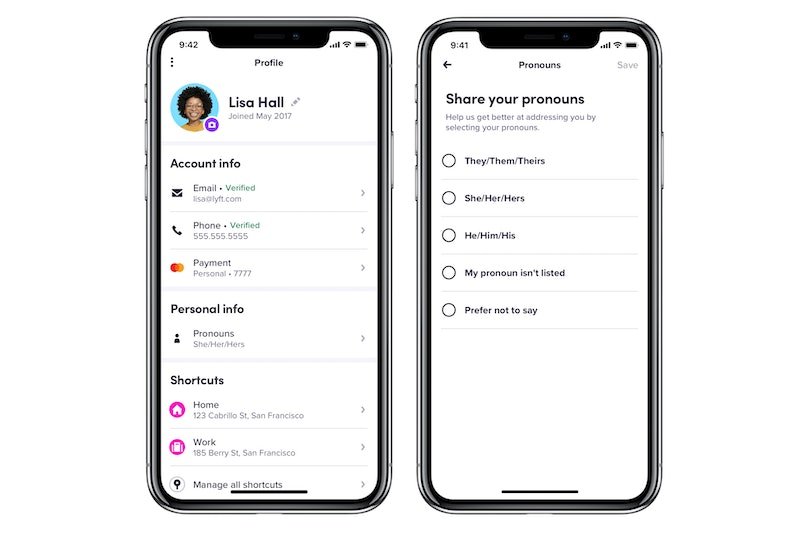 Just in time for June, Lyft is announcing that it’s driving at high gear into Pride Month: passengers can now add their pronouns to Lyft’s app. The rollout of this new feature is part of the ride-sharing service’s long-standing efforts to improve access and inclusivity.

The pronoun choice addition to the app is the most public-facing Pride Campaign rollout. Lyft has proclaimed that “two is too few”: Lyft users will no longer have to choose between just “male” and “female” gender options. Instead, they can add their pronouns directly to their profile: options now include they/them/theirs, she/her/hers, he/him/his, “my pronoun isn’t listed”, and “prefer not to say.” By going to your profile in the Lyft app, you'll be able to click the "personal info" button and add your pronouns. It's that simple!

Significantly, the they/them/theirs option will be listed as the first option people have. As a nonbinary trans person, I can assure you that this prioritizing of they/them/theirs pronouns is a rarity, especially outside of explicitly LGBTQ organizations. Sure enough, Lyft’s Chief Marketing Officer Joy Howard tells Bustle that the celebratory nature of this emphasis is exactly Lyft’s intention. "Pride has always been a really big holiday at Lyft," Howard says, "So we thought, how can we celebrate this community? And what can we do that's beyond a celebration? What's a concrete action that we can take to support the community?" Hence, the pronoun option was born.

Lyft Communications Specialist Zachary Kizer tells Bustle that the company has been working with a “handful of trans drivers across the nation that we've been in contact with [to determine] how to best provide the services that they need.” In that vein, Lyft’s Pride 2019 Campaign extends into a partnership between Lyft and the National Center for Transgender Equality (NCTE).

Through this partnership with NCTE, Lyft will be providing free name change resources for any transgender and nonbinary Lyft drivers who might need them. In addition to working with NCTE to provide resources regarding the (often arduous) process, Lyft tells Bustle in a press release that the company will be providing $200 worth of financial support for name change fees, in partnership with NCTE. Howard tells Bustle that “it's a fact that the cost of name change has risen, [and] this is a meaningful and significant contribution we can make” alongside NCTE.

But Lyft isn’t stopping there: through their Round Up & Donate program, Lyft is also making it possible for passengers to round up the cost of their ride and donate that money to an organization of their choice. The LGBTQ advocacy organization the Human Rights Campaign (HRC) is one of the choices Lyft passengers can make, right through their app, to donate. This long-standing partnership has already raised nearly $3 million in donations from Lyft riders to HRC, Howard tells Bustle. The partnership “has been a really important partnership for us in terms of [creating] a more inclusive workplace.”

These values come through in Lyft’s Pride 2019 campaign, from gender-affirming pronoun options to name changes and fundraising. "People should no longer have to define their gender by ticking one of only two boxes," a press release about the Pride campaign notes. "It’s not only outdated, it’s wrong and hurtful. Two is too few recognizes the beautiful and very real spectrum of LGBTQ+ humanity.”

Of course, these strides forward don't erase the realities of living life as trans and nonbinary people: announcing one's pronouns (of any kind) as a trans person can open oneself up to violence. And with reason: tremendous amounts of lethal violence against transgender people (especially trans women of color) exists across the country. The notion that a driver can see pronouns where previously they only would have seen a name can unintentionally out people, and therefore inadvertently put trans and nonbinary people in unnecessarily vulnerable positions.

Regardless of whether trans and nonbinary people feel safe using this new feature, however, its existence is indeed a move toward the kind of visibility that the community needs to ultimately create a safer world.

"If I could go back to the younger version of you and let them know that they have options and don't have to stay in a box," Howard tells Bustle, "that's the goal.” Happy Pride to that.

This article was originally published on May 29, 2019