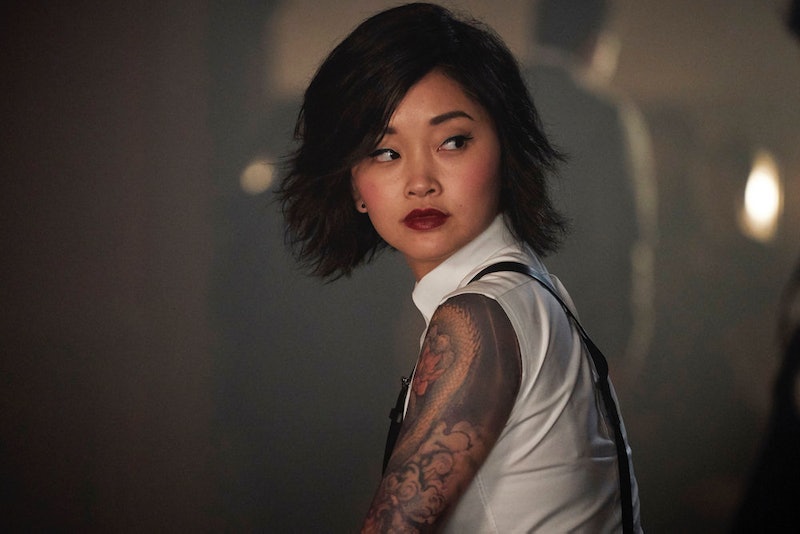 Lana Condor is trading in love letters and whimsical outfits for a katana, full upper body tattoos, and bloody violence. While the To All the Boys I've Loved Before star is already gearing up for a sequel to Netflix's wildly popular rom-com film, she first had to shed any and all ties to sweet, romance-obsessed Lara Jean Covey as she prepared for her new Syfy series Deadly Class. And the role Condor plays has changed her life in ways she never expected.

Based on the graphic novels of the same name, Deadly Class (premiering Jan. 16 on Syfy) stars Condor as Saya Kuroki, a deadly teen at the top of the high school hierarchy of King's Dominion, a boarding school for wannabe assassins in the late '80s. But don't expect to see Condor rocking the fun scrunchies and leg warmers normally associated with the 1980s – Deadly Class is all about the darker underworld of '80s punk counterculture. Dressed in black and white, with heavy eyeliner and dark lipstick and about 80 percent of her upper body covered in large tattoos, including full sleeves and chest and back pieces, Saya is the definition of a badass warrior that you wouldn't want to meet in a dark alley.

But as a child of the '90s, Condor needed some schooling before she could get into the character of Saya, so the Deadly Class showrunner Rick Remender sent her and her other young co-stars curated playlists of '80s music made specifically for each of their characters. "The first song on mine was something about how 'the world is on fire, hate the world,' all this stuff," Condor tells Bustle along with a group of journalists on the set of Deadly Class. "When I first listened to it I was like, 'This is going to be a long ride. This is really angry!'"

Condor breaks off into a big laugh, something that Saya would never be caught dead doing, further illuminating just how different the actor is from her newest role. But as her co-stars began to dive deeper into their personal playlists, Condor found her inspiration for Saya in a different way.

"I focused the most on training for it because I knew how much Saya was going to have to physically fight," Condor says of the skilled teen assassin. "The pain that my body went through in that physical training, I brought that into the character because she has so much pain in her past. That pain I felt lifting a weight, I was like, 'This is what it must have felt like!'"

And Condor knew she couldn't just go halfway. She started aggressively working with a trainer months before she even knew if the series would be officially greenlit.

"Yeah, my body was broken. It was horrid," she remembers as she begins to scratch at the inside of her elbows where her fake tattoos have started to rub off. "But I wanted to try. I think Chris Hemsworth said this, he built himself up the first four months before a movie so that when he shoots the movie he knows he's not going to have time to work out so his body and physical strength will slowly decline. But [you] start off good and [then] slowly decline. So I was like, 'I want to be him! I want to be like that!'"

Slowly over the course of her training, Condor started to notice a shift, not only in her physical strength but also in how it was affecting her mentally, and not just during filming but also in real life.

"One of the coolest parts [of that training] is learning how to defend yourself, because [I'm now] able to have the tools and training to know how to defend myself if ever I get into a situation, god forbid, if I had to," Condor says. "The women on the show are so badass and the show has really given all of the women on the show this sense of power that they maybe didn't have prior to going into this, for sure."

Condor's training is definitely going to good use, as Deadly Class is one of the most shockingly violent shows you'll ever see on basic cable, with many of the best fight scenes involving Saya's expert skills. And while some of the King's Dominion students are averse to violence and don't want to be there, Saya – and Condor – feels right at home.

"I quite like being at a school for assassins and Saya wants to be here. She wants to be the best," Condor says. "Does she like to kill? No, but she will if she has to. But I have a power that I've never felt before!"

As she continues to rub off the fake tattoos on the inside of her elbows, Condor explains how the makeup department had tried an experiment on her the night before: instead of taking off her fake tattoos, they wanted to see if she could sleep in them and not have to reapply them the next morning. As she picks at her irritated elbows, she laughs at how the experiment clearly failed.

"Every morning I go through tattoos for three hours," she says. "But it's worth it. What's made this job really easy is that it's been a total physical transformation so when I get my tattoos on and I have my hair, I don't feel like Lana anymore, so half of the work is done for me. There's Saya. I clearly don't have sleeves in real life."

But she's definitely grown fond of seeing herself covered in those badass tattoos. "I'll catch myself flexing in the mirror and I'm like, 'Oooh!'" Condor says with another laugh. So prepare to say hello to Saya (and goodbye to Lara Jean Covey ... ) when Deadly Class premieres later this month.