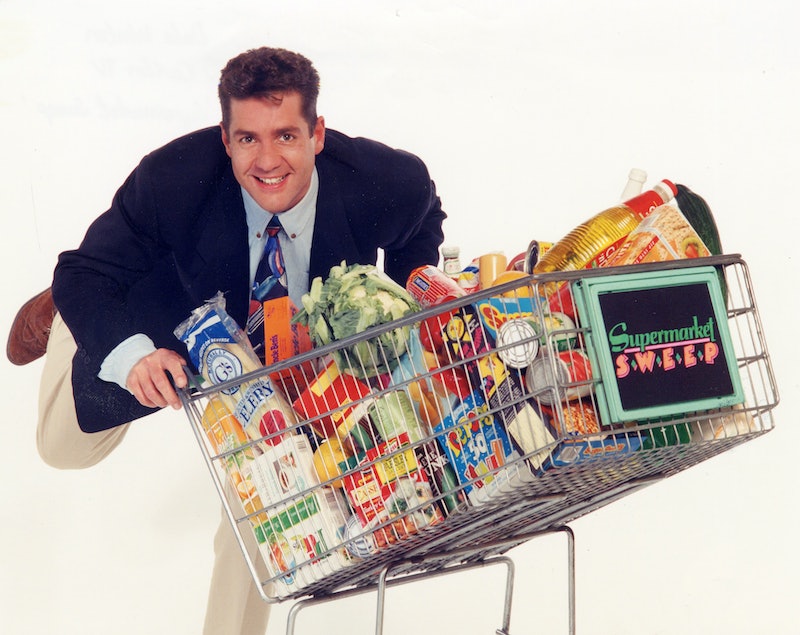 Next time you’re at the checkout and you hear the beep, think of the fun you could be having on Supermarket Sweep. Yes guys it's back, and in terms of '90s nostalgia, this is seriously up there. Supermarket Sweep is the camp, fast paced, fun, silly game show that is fun for all the family. The new show will unfortunately be minus its original host Dale Winton after his sad passing in 2018, with TV host and fan favourite Rylan Clarke stepping in to fill some very big shoes. So how do you apply for Supermarket Sweep 2019?

Production company Freemantle/Thames are making the reboot of the show, which will air on ITV2. They confirmed to Metro that they are indeed looking for contestants to take part in the show. They said they want:

It really is one of those shows that you watch and think, "I could effing do that". It's not rocket science is it?

TBH it's wild it took this long for a reboot, and as long as you're over 18 you can apply by emailing gameshow-casting@thames.tv. This might be your chance to strategically choose the more expensive items.

Did you know the show was based on an American programme of the same name, which ran on U.S. channel ABC from 1965-67? The UK version was considerably more popular and ran from back in 1993 up to 2001, and in 2007, and was a huge hit. As it was on in the morning, it was top shelf entertainment for sick days. The format for the show was acquired by Freemantle Media back in 2017. At the time, their executive vice president of global acquisitions and development Vasha Williams said:

"Modern technology allows us the opportunity to update the show, making it relevant for a 21st Century audience."

What the hell does that mean? Online ordering? Focaccia? As long as they keep the weird random bits of hidden inflatables, the pick and mix round, and of course the jumpers — I'm happy.

Well one updated and very 2019 part of the show is host Clarke, who rose to fame after he appeared on The X Factor. His career has gone from strength to strength and he is now a host on ITV's This Morning.

"Been waiting a while to say this but it’s finally time to GO WILD IN THE AISLES ONCE AGAIN! Supermarket Sweep is back, and I can’t wait for you to CHECK IT OUT. See you soon on @itv2#SupermarketSweep."

Although we know relatively little about the show, it is likely to be a mega hit, especially considering that '90s nostalgia is absolutely the one. Have you seen the Crystal Maze reboot? Watching celebs like the GC slaying challenges truly is entertainment.

Although it's not been announced when the show will be on TV, The Sun reports that it is likely to air at the end of this year or early 2020.

More like this
ITV’s New Take On 'Love Island' Is Only For MILFs & DILFs
By Sam Ramsden
Every Season Of 'Love Island' Ranked Best To Worst
By Alice Broster, Frances Stewart and Sophie McEvoy
This 'Emily In Paris' X 'The Hills' Crossover Is Très Chic
By Marenah Dobin
This Pre-'Love Island' Video Of Olivia & Zara Together Changes Everything
By Bustle UK
Get The Very Best Of Bustle/UK
Sign up for Bustle UK's twice-weekly newsletter, featuring the latest must-watch TV, moving personal stories, and expert advice on the hottest viral buys.