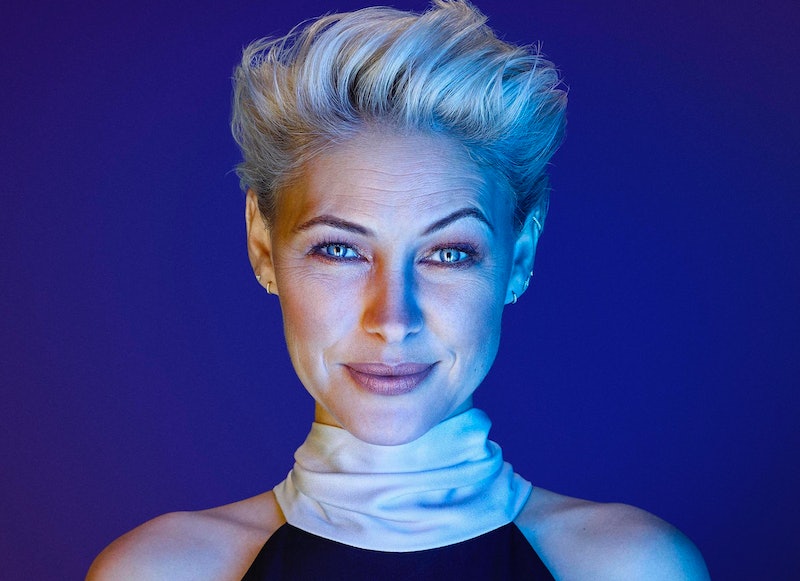 Channel 4's The Circle has just been confirmed for a third series, and will kick off in 2021. The reality TV series — which is kind of like Big Brother, but with a very modern twist — launched in 2018 and was met with huge praise, so it's no wonder that it's back for round three. But this year, things will be a little different due to the coronavirus outbreak.. Here's everything you need to know about the show, from what the premise of it is to how to apply for The Circle.

What is The Circle?

The Circle is a Channel 4 TV show that sees a bunch of strangers living in the same apartment building. The catch? They never actually meet each other, instead only communicating via social network The Circle, a purpose-built, voice-activated site. Each contestant can make a choice to play as themselves, or to become someone else on social media by creating a profile and essentially catfishing their fellow "players." The aim is to get your fellow users to like you, as each week, the most unpopular player (determined by ratings) is blocked and sent packing. It is only then that they get to reveal who they really are to the others. The winner gets a cash prize, so the incentive to be liked is real.

2018 saw contestant Alex Hobern win an impressive £75,000 after managing to convince the others that he was a woman called Kate. The pictures he used were actually of his girlfriend Millie. Hobern has revealed that since winning, the pressure has gotten to Millie. "She loves the buzz around me, but not the buzz around her," he told metro.co.uk. "Now her normal Instagram page, where she uploads pictures of trees, has like 45,000+ fans. She’s like, 'I can’t upload what I want to upload because people judge it now.'"

He continued: "It’s a real complicated world we’re living in. I haven’t even got the money or spent it yet, and people assume a jacket Millie’s wearing must be a present from me. No! I don’t have the money yet… It’s just really awkward. She’s not a fan of that but everything else she’s lapping up."

In 2019, there was an even more interesting line-up of guests. Presenter Richard Madeley took part, along with Zoe Ball and Fat Boy Slim's 18-year-old son Woody. The list of contestants also included 58-year-old university academic and animator Tim, who described himself as a cross between Santa and Mrs Doubtfire (amazing), 26-year-old James, who played a single Mum, and 43-year-old Katie, who played her 25-year-old son Jay.

The series was won by Paddy Smyth, who played the game as himself. He took home an impressive £70k, with the remaining £30k being given to fellow player Tim Wilson, who won the ‘viewers champion’ vote.

When is The Circle next on?

The news that the show was returning for series three has only just been announced, so we have a while to wait for it to be on TV. Due to coronavirus restrictions, series three will be filmed ahead of time later this year in 2020, and will hit screens in “early 2021,” according to Deadline.

How can you apply for The Circle?

You can apply at The Circle’s casting website, but must be over the age of 18 to do so, and be a resident or have the right to reside in the UK.

More like this
An 'X Factor' Legend Has Joined The 'Strictly' 2022 Line-Up
By El Hunt and Sam Ramsden
Fans Are Convinced That 'Love Island's Gemma & Luca Have Secretly Split
By Frances Stewart
This 'Bridgerton' Polin x 'Love Island' Crossover Is Everything
By Darshita Goyal
The Love Island 2022 Reunion Drama, Explained
By Sophie McEvoy
Get The Very Best Of Bustle/UK

This article was originally published on Sep. 25, 2019