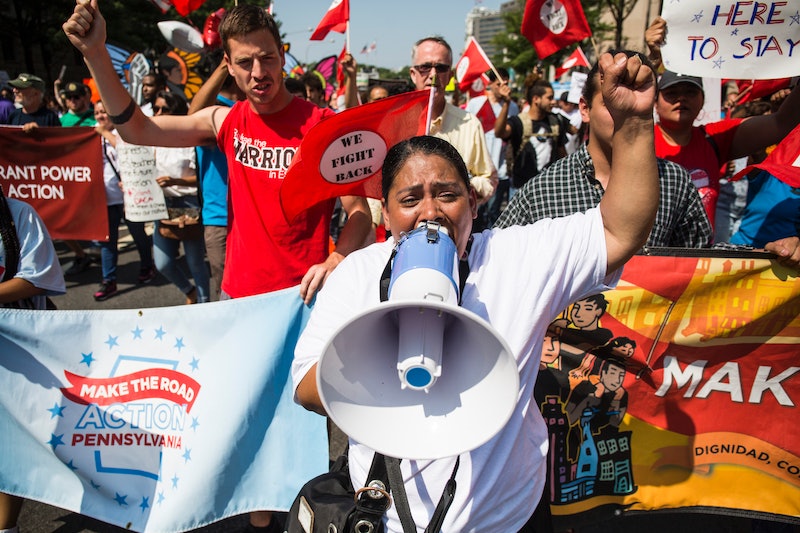 On Tuesday, Attorney General Jeff Sessions announced that the Deferred Action for Childhood Arrivals (DACA) program will come to an end. The decision to end the program that granted 800,000 undocumented young people temporary work authorization was praised by many, some of whom were happy that President Donald Trump was fulfilling a campaign promise. But, many others — for many reasons — believe that Trump was wrong to end the DACA program.

One of the arguments about why Trump was wrong to end DACA rests on the sense of right and wrong. "Ultimately, this is about basic decency," wrote former President Barack Obama, who implemented the DACA program via an executive action in 2012.

This is about whether we are a people who kick hopeful young strivers out of America, or whether we treat them the way we’d want our own kids to be treated. It’s about who we are as a people – and who we want to be.

Taking a similar approach, former Vice President Joe Biden appealed to Americans' decency and morals. "Brought by parents, these children had no choice in coming here. Now they'll be sent to countries they've never known. Cruel. Not America," he tweeted.

But as is evidenced by actions and comments made by some, not everyone shares the same idea of what is "right" and what is "wrong," as well as what is "American" and what is not "American." However, there are a few logical, non-emotional arguments you can use if you find yourself in a discussion with someone who is invoking the oft-used (and oft-wrong) arguments advanced by those who decry the DACA.

Your response: Citing the Constitution is a favorite rhetorical move for some who oppose the DACA. Even Trump's attorney general Jeff Sessions claimed that Obama's executive action that instituted the DACA program was "unconstitutional" in his announcement on Tuesday. However, according to researchers and legal experts, the DACA isn't actually unconstitutional, at all.

This is because the Constitution doesn't actually address "the sources of federal power to regulate which non-U.S.nationals (aliens) may enter and remain in the United States," according to a 2013 report by the Congressional Research Service.

Furthermore, according to Supreme Court precedent from the 1980s, presidents have a power called "prosecutorial discretion," which allows them to decide how and which to enforce immigration laws on undocumented immigrants.

This means that these decisions regarding DACA recipients were made on a case-by-case basis. Obama's homeland security secretary Janet Napolitano was careful to express the DACA policy this way, even if Obama sometimes fell into generalizations about "hardworking young people" earning the DACA status. Nonetheless, each undocumented person who receives DACA benefits is evaluated individually.

As John Sandweg, the former acting director of U.S. Immigration and Customs Enforcement and the former acting general counsel of the U.S. Department of Homeland Security under Obama, wrote in The Hill, the DACA program actually allowed immigration officials to focus on prosecuting and deporting violent criminals in the U.S. illegally.

"It is no coincidence that in the years after DACA was created, Immigration Customs Enforcement (ICE) was able to deport a record number of convicted criminals," Sandweg wrote.

Plus, according to Think Progress, Congress does not allocate the funds necessary to deport all the undocumented people living in the U.S. — so nationwide mass deportations are basically impossible. This means that including the law-abiding young people who are covered by the DACA with the other undocumented immigrants ICE focuses on will actually make ICE's job a lot harder by clogging up the immigration enforcement system.

Your response: Anti-DACA people sometimes like to make economic arguments that aren't really based in reality. According to the Center for American Progress, allowing undocumented young people to work legally strengthens the American economy in a few ways.

That study showed that many DACA recipients bought cars and homes after receiving legal authorization to work in the U.S. — and thus increased demand in the automotive and housing markets. Furthermore, it is projected that ending the DACA would result in a $460.3 billion blow to the U.S. gross domestic product over the next decade.

And one last note: DACA applications don't even draw from taxpayer money when an applicant is being processed by the government. The undocumented person pays for the cost of processing his or her application upfront.

Your response: More than a few DACA opponents have equated the DACA program to "amnesty" for undocumented young people. This, however, is not true.

As the American Immigration Council stressed in a 2014 report, the DACA never granted permanent exemption from deportation. As the full name of the executive order suggests, the benefit of the program is only "deferred action," or a temporary stay on deportation. Also, the DACA does not provide a pathway to citizenship for the young people who receive it.

If you find yourself talking to someone about DACA, make sure you know the facts. Be prepared for the arguments you might hear, and have a response to try to explain step-by-step why DACA brought so much good to the U.S.