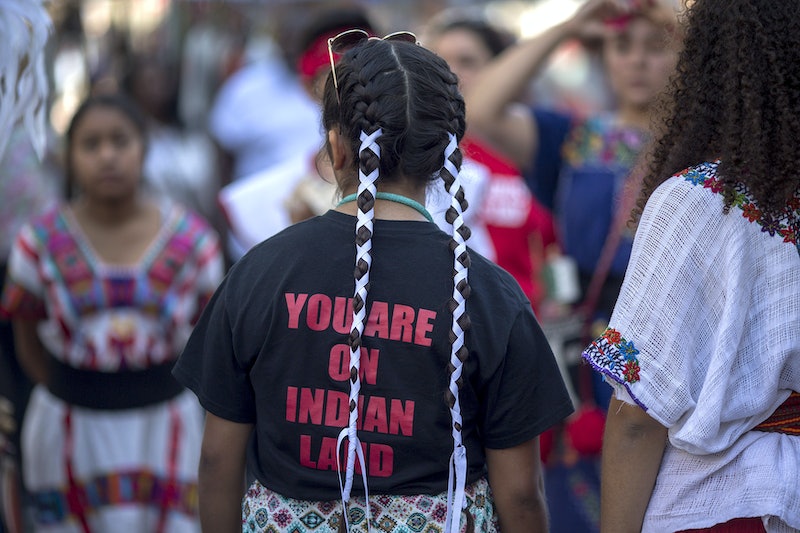 It's Columbus Day, which means it's time for the annual debate about whether or not the holiday is worth celebrating. In fact, this shouldn't be a debate at all: Columbus Day is definitely not worth celebrating, and if you encounter anyone who feels otherwise, here's how to argue the point effectively.

First and foremost, Christopher Columbus was a reprehensible human being — a violent and cruel man who needlessly oversaw the torture and murder of countless native Americans. He did this not out of self-defense, but rather, out of desire for the their gold. The historical record is clear on this, as one of the only first-hand accounts of Columbus's expeditions shows.

"Endless testimonies...prove the mild and pacific temperament of the natives," wrote Bartolome de las Casas, a priest who accompanied Columbus' on his pillaging of Cuba. "But our work was to exasperate, ravage, kill, mangle and destroy."

Las Casas wrote that Columbus' men "thought nothing of knifing Indians by tens and twenties and of cutting slices off them to test the sharpness of their blades." He recounted an instance in which "two of these so-called Christians met two Indian boys one day, each carrying a parrot; they took the parrots and for fun beheaded the boys."

When not slaughtering natives for fun, Columbus' team was either raping them — here's a disturbing account from one of Columbus's friends on the matter — or enslaving them, forcing men to mine gold and women to work fields. In Haiti, a quota was set for gold collection: Any natives who failed to bring Columbus the required amount of gold every three months would have their hands cut off, which of course resulted in them bleeding to death.

All of this wrought havoc not only on native couples, but on their children as well.

"As for the newly born, they died early because their mothers, overworked and famished, had no milk to nurse them, and for this reason, while I was in Cuba, 7,000 children died in three months," Las Casas wrote. "Some mothers even drowned their babies from sheer desperation...in this way, husbands died in the mines, wives died at work, and children died from lack of milk."

Less than two years after Columbus landed in Haiti, half of the island's native population — 125,000 people — was dead. Las Casas concluded that Columbus "was so anxious to please the King that he committed irreparable crimes against the Indians." Even historian Samuel Eliot Morison, who wrote a glowing and widely-celebrated biography of the man, grudgingly acknowledged that "the cruel policy initiated by Columbus and pursued by his successors resulted in complete genocide."

There are plenty more accounts of the atrocities Columbus committed during his time in the Americas. Here's one of them, here is another one, and here's one more just for good measure. If you doubt the reliability of eyewitness accounts, don't worry — Columbus freely admitted in his own writings that subjugating and enslaving natives was his first priority, and action, upon landing in the New World. Here's one section in which Columbus, writing to a friend, casually recalls selling pre-teen natives into sexual slavery.

You may notice that the all of the aforementioned horrors took place on Caribbean islands, not North America proper. That's because Columbus, over the course of his four voyages to the New World, never actually landed in America. He went to a bunch of places that are close to America, like Central America and modern-day Haiti, but Columbus never once set foot on North American soil. Never, not once in his life.

Similarly, Columbus did not discover that Earth is round. That myth was started in the late 19th-century by a Columbus enthusiast, but it's just that — a myth. The ancient Greeks discovered that Earth is round, and by the time Columbus set sail, the planet's roundness was well-known by most European schoolchildren.

For some, the holiday is a matter of national pride; both now and in the past, many Columbus day celebrations also serve as celebrations of Italian heritage. There are two problems with this, however. First, Columbus made his voyages as a hired hand for Spain, and was representing the Spanish government's interests during his expeditions; second, Italy didn't even exist as a national entity until hundreds of years after Columbus was dead. Columbus would not have identified as Italian, because there was no unified "Italy" of which to speak.

All of this is worth dwelling on. If Columbus was the genocidal despot that even his defenders admit he was; if he never even went to the country he supposedly "discovered;" and if he didn't make the scientific discovery with which he's so credited; then why, exactly, do Americans celebrate him?

Many Columbus apologists argue that we should celebrate him because he embodies, in the words of one Fox News columnist, "the spirit of exploration." And to give credit where it's due, Columbus's voyages certainly were dangerous, daunting propositions. He undertook them regardless of the risks, sailing into unknown waters in the hope of finding undiscovered land, and that certainly does indicate an exploratory spirit on his part.

But is that really commendable enough to cancel out genocide? Was Columbus's willingness to be an explorer such an outstanding personal attribute that it justifies the nightmarish torment he unnecessarily inflicted on hundreds of thousands of natives?

The answer is no. It's perfectly possible to discover a new land without kidnapping pre-teens and selling them as sex slaves, for instance, or beheading children for fun. Columbus chose instead to participate in and sanction those activities. As a result of his own moral character, native women were raped, native men were enslaved, native children were slaughtered and entire populations were wiped out.

Nothing — not Columbus's "spirit of exploration," not his ostensibly-Italian heritage — make any of that excusable. There is absolutely no reason to be celebrating Christopher Columbus.