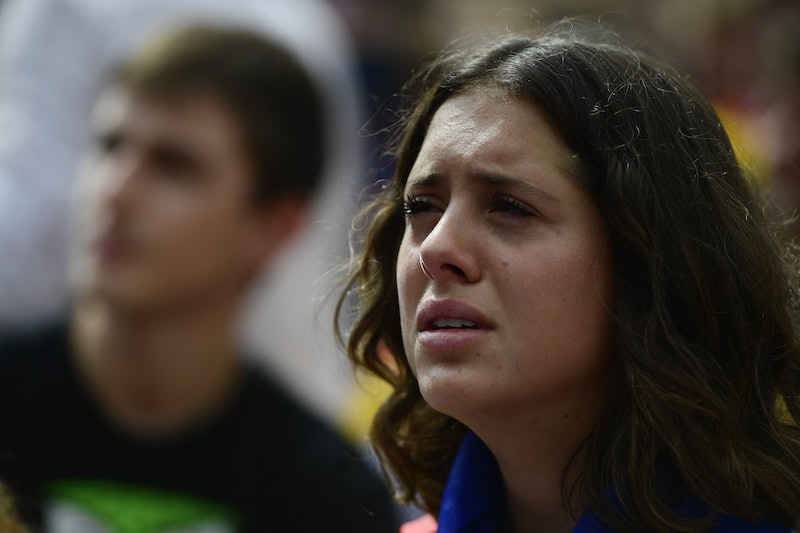 So you're at a party, and someone says something ignorant. And while you know that they're in the wrong, and that you could totally engage them and win if you were a bit more prepared, your words escape you. To make sure that doesn't happen, we've compiled a series of handy reference guides with the most common arguments — and your counter-arguments — for all of the hot-button issues of the day. This week's topic: How to argue against Trump's birth control mandate reversal.

Common Argument #1: Why should anyone have to pay for birth control besides the woman who uses it?

Your Response: Because we live in a society which depends on the collective whole being willing to work together to tend to the needs of the few, and the women in this country who need birth control are not just a few. You're talking about tens of millions of women, all of whom collectively help fund plenty of programs, provisions, and social goods they themselves will never use or need.

The way it works is this: Everyone chips in to fund an array of policies that it's hoped and believed will benefit society. And the birth control mandate, guaranteeing that any woman with employer-based health insurance would know she had greater control over her reproductive health, was a very good one.

Common Argument #2: Why should an employer have to cover this sort of thing, though?

Your Response: If you're not happy with owners of companies having to be responsible for any of this ― unhappy with America's longstanding reliance on employment-based insurance, in other words ― then you might be interested in recent Democratic efforts to pass a Medicare-For-All bill. After all, a nationwide, government-funded system like that would completely take people's bosses ― and their bosses' religions ― out of their health care choices.

Common Argument #3: Nobody else should have to pay for your sex life.

Your Response: It's not about a woman's sex life, it's about her own medical and reproductive health, and that's a childishly reductive way to look at it. Someone could just as easily complain about men having drugs for erectile dysfunction covered on their employer health insurance, seeing as all it does is facilitate them having sex. But nobody does that, because when men are centered in the conversation, it's just conveniently understood that health care relating to sex and reproduction isn't strange, taboo, or off-limits, it's all totally serious, and deserving of attention and respect.

Your Response: That's what some HHS officials in the administration claimed, quoted on condition of anonymity during a briefing with reporters. But it's not even been remotely explained how they arrived at that figure. And moreover, if it's a change that'll only actually affect a narrow a sliver of American women, but it'll have a decidedly negative impact on them, then why do it at all?

Common Argument #5: If you can't afford to buy your own birth control, maybe you shouldn't be having sex.

Your Response: Sexuality is a fundamental part of human existence, and taking away contraception from women and couples isn't going to change that fact. Women are going to continue to have sex, just without the same level of safety, control, and relative financial ease they had back when they had free contraceptive coverage. You can complain about that if you want, but it's naive to pretend otherwise.

What it will surely lead to, rather, is an increase in unplanned pregnancies, and an increase in abortions ― a reversal, for example, of positive trends in lowering teen pregnancies in recent years. Notably, conservatives are broadly anti-abortion, as evidenced by a 20-week abortion ban currently making its way through the U.S. Congress. Anyone who's stridently opposed to abortion should want women to have access to contraception, but it rarely seems to work out that way.

Common Argument #6: If women have a problem with this, they shouldn't work for companies with anti-contraceptive religious beliefs.

Your Response: That's very easy to say from a positive of relative financial success, or the kind of privileges in life that make it easy and relatively painless to hop from one job to another. But plenty of people aren't that blessed, and can't decide to change jobs because of a decision by the federal government that was made effective immediately, and they had no way to plan or prepare for.

Also, the revised contraception policy effectively means that virtually any company could voice a religious objection, provided it could demonstrate that objection to the satisfaction of the administration. It's a big enough loophole that a whole lot of companies could theoretically try to jump through, even ones you might not expect while you're filling out your job application.

Common Argument #7: This is about religious freedom.

Your Response: If the Trump administration really wanted to protect the rights of corporate entities to express their religious beliefs ― a pretty weird concept when you step back and look at it ― without negatively impacting the health and well-being of America's women, it could do so. Not without some expense, but it could, and it'd show that this wasn't about punishing or restricting women. Trump could have announced, for example, a new HHS program explicitly dedicated to funding birth control for any woman who wanted it, a universally available program on basis of an individual's needs and desires.

Instead, it just so happens the administration chose a deeply destructive trade-off, particularly for low-income women who've relied on it to keep themselves protected from unplanned pregnancies.

This is actually the story of a male-dominated government unilaterally electing to make it harder for women to exercise their reproductive choice, at the very same time as it's advancing a new abortion ban through the Congress. It's about the most basic expectations of women's rights, and how a right-wing government is doing whatever it can to push back against them.