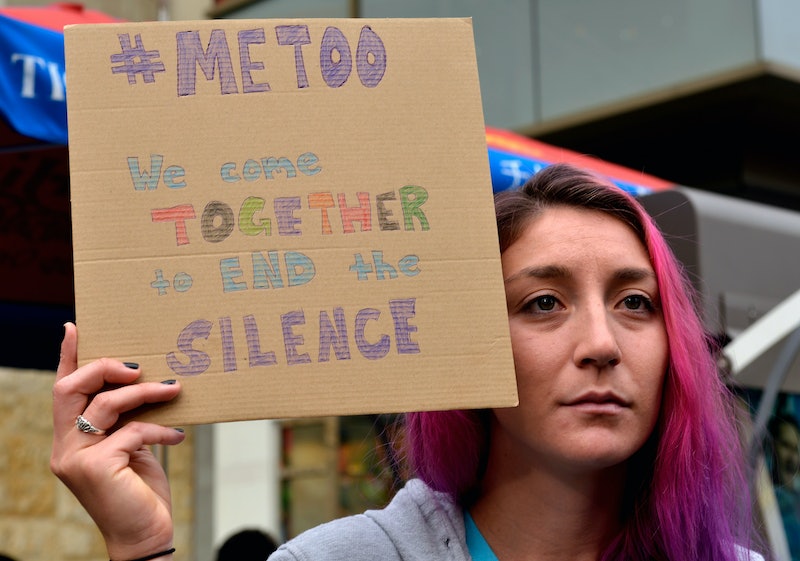 On Wednesday morning, TIME announced its Person of the Year for 2017. It honored the women and men behind the #MeToo movement — the "Silence Breakers" — who have been collectively responsible for publicly calling out sexual harassers, assaulters, and predators. It doesn't look like it's slowing down, either, which is why it's the perfect time to consider how to be a silence breaker in your own life, as long as you're comfortable coming forward.

Just how to be a silence breaker is the big, looming question amid the slew of sexual misconduct allegations that have been thrust into the spotlight. Needless to say, the public reckoning against powerful, predatory men in entertainment, politics, and media has been an end unto itself. It's one that's been long overdue for all the people who've suffered and been violated, or have had their own careers, ambitions, and dreams derailed in the process.

Issues like sexual violence, rape culture, and misogyny go further than just the upper echelons of society, or just the Western world. They have impact countless women and men throughout the country and around the world ― often affecting low-income women with little money, no public platforms, and far less safety, to boot ― on a scale that's depressing to consider.

Which raises, again, that question: What can people do in their everyday lives to be a silence breaker? If they're ready to talk, and ready to break through the silence and stigma?

Here are some things to keep in mind.

You Do Not Have To Speak Out

This is hugely important. Over the past several weeks, individuals of many identities ― women, men, LGBTQ, and nonbinary people, to name some ― have come forward to tell their stories. That should not be demanded of anyone who’s experienced rape, sexual assault, or harassment, especially considering how very few individuals have the visibility and financial security of some of the high-profile celebrities who’ve recently spoken out.

In particular, survivors should ask themselves whether they'll be physically, mentally, and psychologically safe if they do speak up. Nothing is more important than that.

It’s entirely up to the survivor of such an incident to determine the best way for them to respond, and that’s not always going to involve privately or publicly confronting their abuser, or going public with allegations in the way the #MeToo movement has made so visible. It may not involve going "public" at all, but just telling one person.

No individual victim should feel pressured to come forward. It’s a personal decision. There is no wrong answer.

To lead on from the previous point: While some individuals might feel comfortable mounting a public campaign against the person who wronged them, or finally telling their loved ones about the incident or incidents, there are many others who might not feel safe or secure doing so. If that's you, or someone you know, it's important to remember you can speak out, if you choose, without making an accusation or even naming the other person involved.

Breaking that silence can be done in any number of ways. It can be done privately, or in the company of close friends, loved ones, or a mental health professional. You can speak confidentially to a therapist about your experience, for example, or have a similarly confidential conversation with a counselor like the ones you can contact through RAINN's hotline.

You Can Break The Silence To Yourself, Too

Sometimes, the most important step is coming to terms with your own experience before you tell anyone else (if you do).

You can break the silence just to yourself, writing about your experience in a journal or an anonymous blog — something you can keep in a safe place and know your privacy won't be violated. Yes, the events of the #MeToo movement have reinforced this image of victims boldly and publicly speaking out against their abusers, but breaking through your own personal silence, in a safe and confidential space, is every bit as important.

Be Kind To Yourself, No Matter What Happens Next

It's impossible to know for sure how the people around you will respond to your story, if you tell it. You deserve unconditional love and a boundless support system, but it's possible that you'll find that some people doubt your story or seek to downplay what you're suffered. This is deeply disappointing, but it's their issue — not yours.

Every survivor deserves to be listened to, and if you find that the people around you aren't providing you with what you need, you can call a hotline for sexual assault survivors to speak to a trained counselor. Even if you've only broken the silence within yourself, if you're suffering, take care of yourself. Reach out. Ask for help. You are not alone. This is not, and never has been, your fault.

If you're thinking of speaking out about abuse you've suffered, but you're struggling with the unique intricacies of your experience and not sure how to go about it, it's valuable to take things slowly, and to seek out advice from groups and organizations dedicated to helping people through this process. As mentioned above, contacting a sexual assault hotline can be a great way to do this, as can reading up on resources and strategies for victims, or contacting a trained mental health professional to help you through the process.