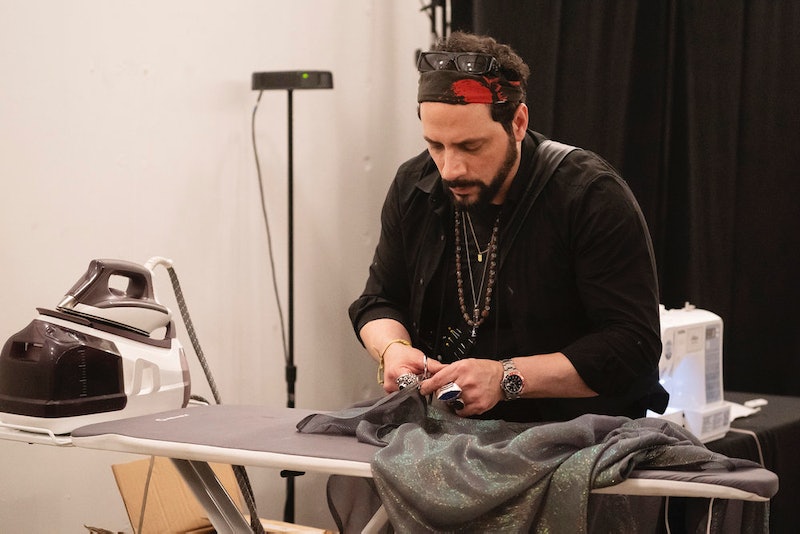 If you're a drag queen — especially one who has earned a spot on RuPaul's Drag Race — you have a much better chance at wearing Project Runway designer Garo Sparo's clothes than the average person. He specializes in corsetry, custom stage wear, and bridal, but thanks to Project Runway, he might have more ready-to-wear pieces available in the near future.

This may be his first appearance on the Bravo TV show, but his work is no stranger to the runway. Outside of Project Runway, he's making waves in the performance world, having dressed front-running Drag Race queens Aquaria (including her recent Season 11 finale look), Miz Cracker, Plastique Tiara, and more. He also creates costume pieces for burlesque performers, supermodels, and other creatives out of materials from the most luxurious silk to the most durable of synthetic plastic, "because if you're doing burlesque, you're gonna be dropping that thing on the floor non-stop, and you better be able to clean it," he told INSIDER.

The nature of his design inspiration makes Sparo's work seem exclusively custom couture and inaccessible, but you can rest assured that, even before the Project Runway finale, that's not the case. His website has a "Shop" section under which you can browse three categories of ready-made items: gloves, cinchers, and step in body shapewear. There, you can choose from and order an array of low slung leather corsets and crystal embellished fishnet gloves, to start.

Of course, those categories barely scratch the surface of what Sparos is fully capable of creating, which is why his website also hosts a "Custom Requests" tab. Upon visiting that section, you can fill out a simple form with your design request, your budget, and a description of your vision. Upon pressing "Send," your dream Sparos creation could come to fruition. And that request form isn't just for stage performers — Sparos has constructed some custom bridal gowns and could do the same for you.

But, if you don't happen to have $1,000 to spend on 100 percent leather decadent snake gloves or even $200 for a pair of pearl-wrapped Cream Point D’esprits, fear not. For now, you have at least one other option to get your hands on a Sparos piece. During Episode 10 of Project Runway, the designers created a t-shirt to sell for a charitable cause of their choice. Sparos' #WearBees tee to benefit The Honeybee Conservancy is available to pre-order for $45. The shirts are made and printed on-demand in the U.S. and ship to your door in four to six weeks. Other fan favorite designs will be available to shop through Nineteenth Amendment at the season's end.

Sparos told INSIDER that his work is inspired by sci-fi, nature, architecture, and so much more. "You name it. I could be inspired by the shape of a light bulb," he said. He also said he hopes to make his designs even more accessible in the future. "As much as I love to do stage wear and insane costumes, I would love to make it accessible o everybody out there," he said. "One day we'll all be able to dress how we feel inside. That will be my time to shine."