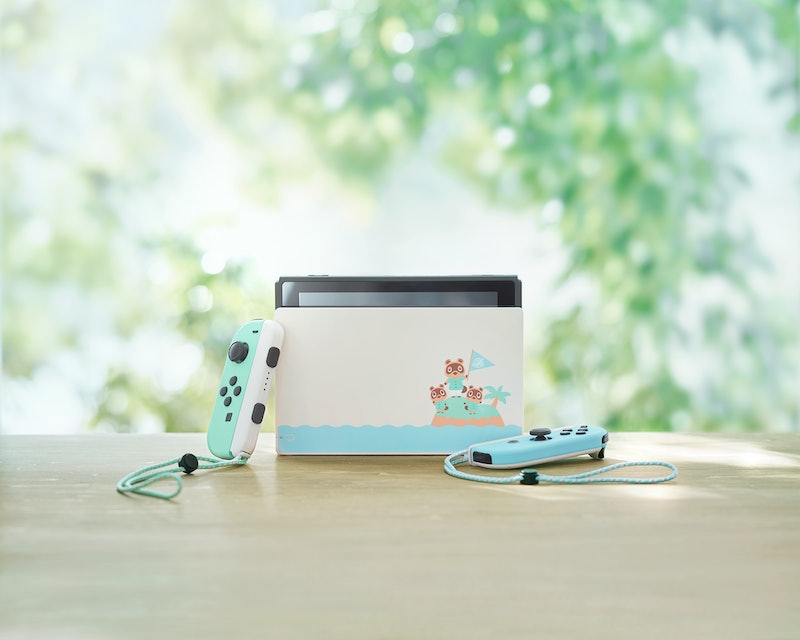 The wait for Animal Crossing: New Horizons is almost over, and Nintendo has only gone and marked the occasion with a brand new Switch design. For the first time since the console’s initial release, this design will feature a pastel colour scheme and a white dock (as opposed to matte black). So here’s where to buy the Animal Crossing switch in the UK, because that pastel green and blue combo is so aesthetically pleasing.

March 20, 2020, has become the unofficial Animal Crossing day, and you can pre-order the new Switch bundle now. You also won’t have to bother with the hassle of pre-ordering the console and the game separately either, as this bundle comes with a digital copy of New Horizons that can be installed onto the Switch through the eShop. The Animal Crossing switch bundle is currently available to pre-order on Amazon, GAME, the Nintendo UK store, Smyths, Argos, and Littlewoods. Currently, the Nintendo Store is the place to pre-order as it’s retailing at £319.99 rather than £329.99 on the likes of Amazon, GAME, and Smyths.

The Nintendo store is the only retailer currently offering the beautiful carry case along with the bundle, which adds an extra £10 on the retail price. You can also buy the case separately for £19.99 (for both the normal console and the Lite), whereas on Amazon it costs £26.12.

There are other bundles available on the Nintendo store, including one that comes with a tote bag, but they’re currently out of stock. If you’re desperate for the bag, GAME are selling the physical copy with it for £49.99. The Nintendo store are also selling physical and digital copies of the game at the same price, but with exclusive character pins of Isabelle, Nook, and K Slider. And if you buy the game at Argos, you’ll receive a cute lil’ K Slider keychain.

On Amazon, if you buy a physical copy you’ll receive an exclusive microfibre cloth with an Animal Crossing design. Amazon are currently the only site selling a duraflexi protector for the Switch at £15.03, which basically can turn your current Switch into an Animal Crossing one. It’s a different design than the new console, but adorable none the less.

If you’re after just the physical game, head over to a Smyths store for the best deal of the lot. It’s currently retailing at £44.99 like the rest of the stores, but you can save £5 if you pre-order it in-store. You’ll also receive an Animal Crossing notepad and some stickers.

And lastly, one place to avoid altogether is Littlewoods, as they’re selling the game at an extortionate price as they did with the Pokémon Sword & Shield Switch. Instead of £44.99, New Horizons will cost you £64.99 here.