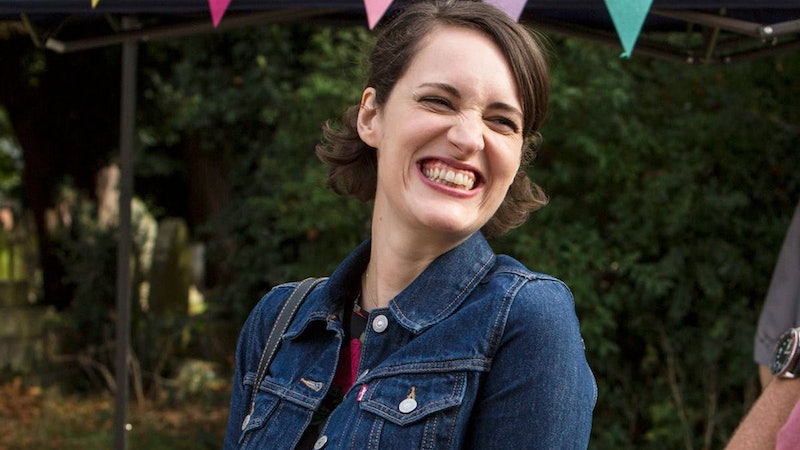 Series 2 of Fleabag may have ended months ago but for die-hard fans, like myself, it really is the gift that keeps on giving. Whether you’re having a duvet day by yourself or wine night with friends the chaotic tale of Fleabag, Claire, their family, and that priest is perfect to rewatch at any time. If you just can’t let the series go, then you'll want to know how to buy the new Fleabag book. If you want to see exactly how Phoebe Waller-Bridge works and how the monumental series came to be then this is the perfect read for you and it comes out just in time for Christmas.

Hodder and Stoughton, the UK publishing home of literary greats such as John Grisham, Stephen King, Jodi Picoult, Erin Kelly, and David Nicholls, announced on Aug. 7 that Fleabag: Scriptures will be released later this year and it couldn’t be easier to get your hands on a copy. The book is already available for pre-order on Waterstones and it’ll be in shops from Nov. 5. In a tweet Hodder and Stoughton said, “you love Fleabag. We love Fleabag. Everyone loves Fleabag. Announcing publication of Fleabag: Scriptures. The entire filming scripts including new writing from Phoebe Waller-Bridge and never-before-seen stage directions.”

While Fleabag may have first come to our screens on BBC Three in 2016 true fans will know that the show started its life as a one woman show that Waller-Bridge debuted in 2013 at the Soho London theatre and the Edinburgh Fringe Festival. In an interview with The Guardian in 2017 Waller-Bridge explained her attempts to understand the show's appeal: “I’m still asking people what it was for them. I get, ‘I am Fleabag,’ a lot. I get them saying, ‘That’s my dad,’ or, ‘That’s my stepmother,’ or ‘That’s my sister.’ I think a lot of people recognise these characters trying to connect and failing. That’s something that has always really got me, watching people try, and fail, [to connect].”

It’s hard not to relate with the way Waller-Bridge writes her characters. From the totally uptight but ultimately lovable Claire, the evil stepmother, and problematic, chaotic, and deviant Fleabag she’s written a story about women that hasn’t really been told before. Hodder and Stoughton revealed that Fleabag: Scriptures will be all of the filming scripts from series one and two of Fleabag as well as new writing and additions from Waller-Bridge and her stage directions. This book will earn you serious brownie points with any Fleabag fans in your life if you buy it as a Christmas gift.

In a statement given to Cosmopolitan UK about the book's launch Hodder & Stoughton’s editorial director Emma Herdman said the book “showcases all we’ve loved about Fleabag, but also proves that what we’ve seen on our screens is only the tip of the iceberg. The reading experience, with the stage directions and Phoebe’s original work, is just as rich as you’d imagine.” These are seriously exciting times.

So, if you haven’t been able to get Claire's iconic haircut or the hot priest out of your head (and who can blame you) you need to get your hands on Fleabag: Scriptures. You can pre-order it now and it’ll be available to buy in shops from Nov. 5.