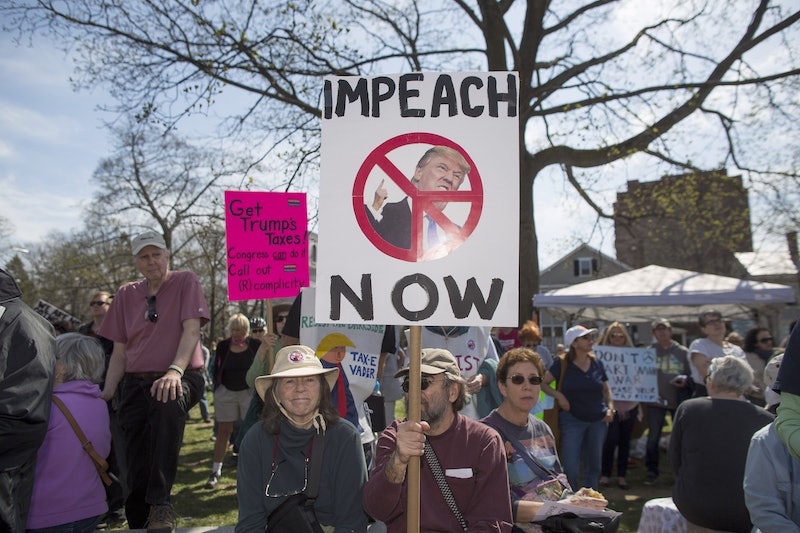 Following several controversies over the past few weeks, there have been some renewed calls for Trump's impeachment. Calling for a president's impeachment is a serious decision that should not be taken lightly. However, if you have indeed reached the decision that you want Trump impeached, here's how to call your Congress member to make your voice heard.

In light of these two recent controversies, some members of the public as well as some members of Congress have become increasingly vocal about wanting to begin the process for impeaching Trump. For example, Rep. Al Green, a Democrat from Texas, recently called for Trump's impeachment, making the claim that Trump's firing of Comey constituted " ... an act for which he should be charged by the U.S. House of Representatives."

However, on the flip side, other Democrats have been more skeptical to use the word impeachment. For example, Minnesota Sen. Amy Klobuchar recently told BuzzFeed News that, in lieu of focusing on impeachment right now, “I think you have to look at all the evidence ... I think right now the focus should be on getting the evidence and getting a special prosecutor appointed.”

If you have decided that you believe Trump should be impeached, you can contact your member of Congress to request that they begin impeachment proceedings. If you do not already know the name of your house representative and your senators, you can look them up here and here, respectively. If you do already know their names, you can use this helpful Google Doc compiled by the organization "The 65" to quickly and directly access their contact information.

Furthermore, Global Citizen recommends writing down a few sentences ahead of the call to help you clearly articulate why you are calling and what you desire from your elected representative. Finally, they also strongly recommend stating your name and zip code to give the member a sense of how their constituency feels about a given issue. Also, remember that in addition to calling your representative or senator, you can also email them or leave messages for them via social media as an alternative or additional way of making your position known.

Overall, if you believe that Trump should be impeached (or if you do not), there are several quick and easy ways to share your views with your member of Congress. A potential presidential impeachment is certainly a very serious issue and it is important to make your voice heard, however you feel about the matter.

More like this
Michigan’s Governor Is “Going To Fight Like Hell” To Protect Abortion Access
By Andrea Zelinski
How To Fight For Reproductive Rights, Based On How Much Time You Have
By Courtney Young
LGBT+ Men Fleeing Afghanistan Were Denied Asylum By The Home Office, New Findings Show
By Sam Ramsden
Spice Girls’ Net Worth: The Richest Member Is Wealthier Than The Rest Combined
By Hugh McIntyre
Get Even More From Bustle — Sign Up For The Newsletter