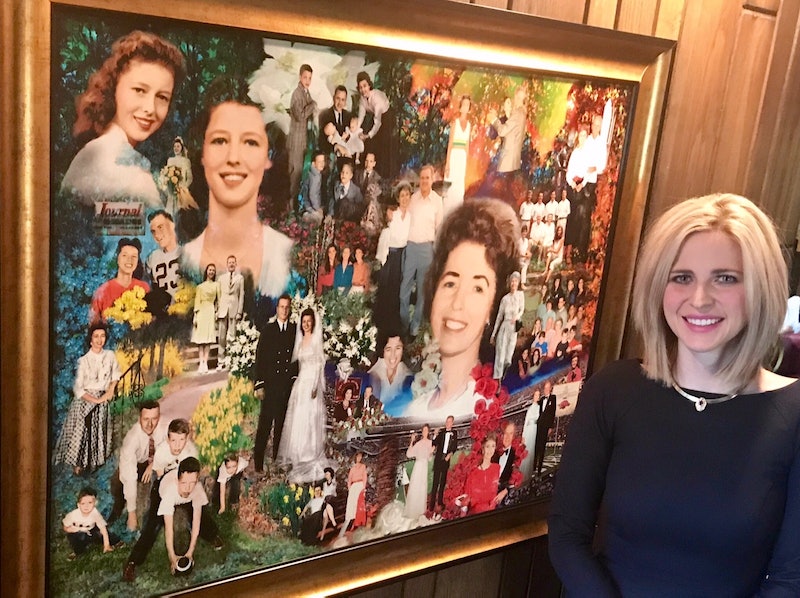 As a child, I always imagined that my grandparents would live forever. But, as we get older, so do they. And for many millennials, the responsibility falls on them to take care of their aging relatives, but some young caregivers are struggling with how to take care of themselves at the same time.

My once smart-as-a-whip Italian grandmother has Lewy body dementia, the same kind that Robin Williams had. Because my grandfather could no longer care for her on his own after surviving two types of cancer, they've moved into an adult independent living apartment, which is very, very expensive. Basically, they still live on their own, but caregivers come in every day to bathe and dress my grandmother, and administer medication. Because they are both Korean War veterans, my grandparents get a stipend each month to pay for this, but it was a years-long process to get everything approved, and without that money I honestly don't know what my family would have done to ensure they were cared for adequately.

Similarly, in 2008, my Dad was dying from liver failure, and along with his sister, I was pretty much alone in caring for him. While you hope it never happens to you, it's good to be prepared because caring for aging family members is a reality of life for many millennials.

Arnold and her family struggled with getting an accurate diagnosis and learning to care for Barbara while supporting Frank, which inspired them to start the foundation as a resource to help caregivers, both familial and professional, become more educated about the signs, symptoms and treatment options of Alzheimer's and dementia. They also offer counseling and support services to individuals across the U.S.

The Isolation Of Being A Caregiver Is Real

When she was just 14 years old, while most girls her age were out shopping with friends, or going to school dances, Arnold had become a third-generation caregiver when her grandmother Barbara was diagnosed with Alzheimer's.

"When my grandma was diagnosed, the only thing I knew about Alzheimer’s was it caused memory loss," Arnold tells Bustle in an email. "The reality is that losing your memories, does not equate to losing your identity. My grandmother may not have been able to call me by my name or recall her favorite book, but without a doubt she was still Barbara Ruth Day Broyles."

Alzheimer's and dementia are often misunderstood diseases with similar symptoms. Most people imagine memory loss when they think of Alzheimer's and dementia, but there are usually other signs first. Arnold says that her grandmother Barbara's symptoms began when she started withdrawing from her regular activities in the community.

"It had been 40 years, we assumed she was ready to retire, now we know it was the beginning of her struggle with the disease," Arnold explains. "Not long after that she called my grandpa crying and said, 'I can’t do this anymore,' referring to balancing the checkbook. Shortly after, she called my aunt for help to turn off the car. She was diagnosed shortly after that."

For Arnold, she was barely a teenager when she began helping to care for Barbara.

"It didn’t take long to realize the majority of people didn’t know how to talk about Alzheimer’s. As a result, I felt like I lived a double life; casually talking about weekend plans at school, then coming home to help change my grandma’s diaper."

Everything changed when Arnold's best friend had foot surgery and a group was going to visit her. She says that even though she wanted to support her friend, Barbara was having a hard day with her disease. She couldn't leave her grandma alone. While Arnold recognized that this was an opportunity to have a conversation about caregiving dilemmas, she wasn't sure how to start.

"I was completely unprepared. I ended up staying home and it really hurt my friend," Arnold explains. "The mental and emotional battle of how poorly I communicated the situation haunted me. I was utterly lost on how to rectify the situation, primarily because the caregiving portion of my life wasn’t ever discussed. Although I remained engaged socially, that situation caused me to feel a deeper sense of isolation from my peers through most of high school. [But], the feeling of isolation allowed space for reflection. I realized the importance for Alzheimer’s to be understood and talked about in the same way as the other leading causes of death. So I started sharing the caregiving side of my life, and that is what I plan on doing as long as people will listen."

While Arnold is one of millions caring for aging relatives, it's often something that is done in isolation. NBC News reported that a 2015 joint study by the National Alliance for Caregiving and AARP estimated that there are more than 40 million unpaid caregivers in the U.S. "To have that many people in this country alone caregive and then for so many of us to feel alone in the experience, that says something," Priya Soni, founder of The Caregiving Effect LLC, told NBC News.

Every 66 seconds in the U.S. someone develops Alzheimer’s Disease, Arnold says. That means an entire family, group of friends, and community are affected. "A diagnosis of dementia doesn’t have to destroy a family. There may not be a cure yet, but there are treatment options and resources."

While it can feel like you're trying to run uphill alone, there are resources available to help make it easier and less isolating.

Alzheimer's & Dementia Are Difficult For Families

While diseases like Alzheimer's and dementia are devastating for the sufferer, they are equally challenging for family members. With my grandmother, it started with little things. Small lapses in memory, usually related to time. Eventually, she lost almost all of her short-term memory, had regular conversations with deceased relatives, and was prone to wandering at night while my grandfather was sleeping — common with Lewy body dementia, the second most common form of degenerative dementia after Alzheimer's, according to the Lewy Body Dementia Association.

Because the apartment is connected to the assisted living facility, nurses find her and bring her home, then call my mom or aunt to let them know. I can't even imagine what would happen if they were still in their home and she was wandering on the street in the middle of the night.

The last time I was home for my cousin Mike's funeral, my grandmother couldn't remember that Mike had died for more than a few minutes. As we sat in her apartment before the service she asked, "Did Mike die?"

"Yes, grandma, Mike had a heart attack," we replied softly. This same exchange happened at least 10 times, and one thing we have learned is to always answer the question like it's being asked for the first time. It's important not to get angry or frustrated with the person who can't remember, even though it's obviously incredibly frustrating. Eventually, we started asking her about memories of Mike from when he was a kid, and, because her long-term memory is mostly intact, she was able to participate in that conversation.

For Arnold, the hardest part about her grandmothers' battle with Alzheimer's was watching how it affected her mom.

"Her mom was her best friend. I believe some of the most beautiful experiences in life are also deeply painful. I observed sacrificial love lived out every day. Her entire life was devoted to making sure my grandma was happy, and her every need was met. It was never about my mom. The physical and emotional toll it takes to be a caregiver is hard to articulate, but doing it for your best friend who is struggling with a disease that robs them of their ability to communicate and eventually call you by name takes a courage and strength that brings me to tears when I try to comprehend it."

According to Tami Reeves, a registered nurse and author of Bleeding Hearts: A True Story of Alzheimer's, Family, and the Other Woman, the emotional toll Alzheimer's takes on family members involves feelings of anguish, despair, frustration, helplessness, and guilt.

"Alzheimer’s is a disease that doesn’t just strike the patient. It makes victims of everyone around them," Reeves, whose husband's late wife Gaye succumbed to the disease when she was only 54, tell Bustle in an email. "At some point the Alzheimer’s patient becomes, as far as we know, oblivious to their condition. But the family is witness to the way it ravages their loved one and transforms them into someone unrecognizable. It truly is a heinous disease, for everyone involved."

There Was No Alzheimer's Playbook, So They Wrote One

After Barbara passed away, Arnold's family began channeling their grief into action by mentoring other families. "It became important to my grandpa that no one had to struggle to find resources the same way we did while caring for my grandma," Arnold says.

The family wrote and published Coach Broyles' Playbook for Alzheimer’s Caregivers, which contains tips and strategies for how to care for someone, and yourself, based on the experiences of family members who cared for Barbara. Additionally, Arnold's grandfather Frank, a football coach and Emmy-award winning college football color commentator, turned his compassion into a passion, and ignited a multitude of people across the country to become involved in the fight against Alzheimer’s Disease, and to recognize the vital need to also take care of, and support, caregivers. His leadership, passion and advocacy led Broyles to an appointment to the White House Council on Aging, representing family caregivers across the country.

"One of the biggest problems we faced was not knowing what to do or when to do it."

In 2006, the family created the Broyles Foundation in Fayetteville, Ark., to help other families create a game plan for caring for their relatives, and access resources based on their unique situations. The foundation also offers training and education for caregivers, support groups, scholarships, and counseling.

Dr. Gary Small, Professor of Psychiatry and Biobehavioral Science at David Geffen School of Medicine at UCLA, says education and early diagnosis are important for both patients and caregivers.

For Arnold, the experience of helping others in the memory of her grandmother has brought her family closer, and many of them work together at the foundation. "Every time my mom and I sit down to counsel a family together it’s still healing for both of us," she says. "It allows a space for other people to understand they are not alone; it reminds us that the pain of feeling alone in the past allows us to connect to hurting people in the present. The foundation is the manifestation of all the heartache we went through. Every time we help someone it honors that sacrifice. My grandma wouldn’t have it any other way."

If you or someone is your family is struggling as a caregiver, you can contact the Broyles Foundation on their website, or reach out to your local Alzheimer’s organizations or aging services groups.