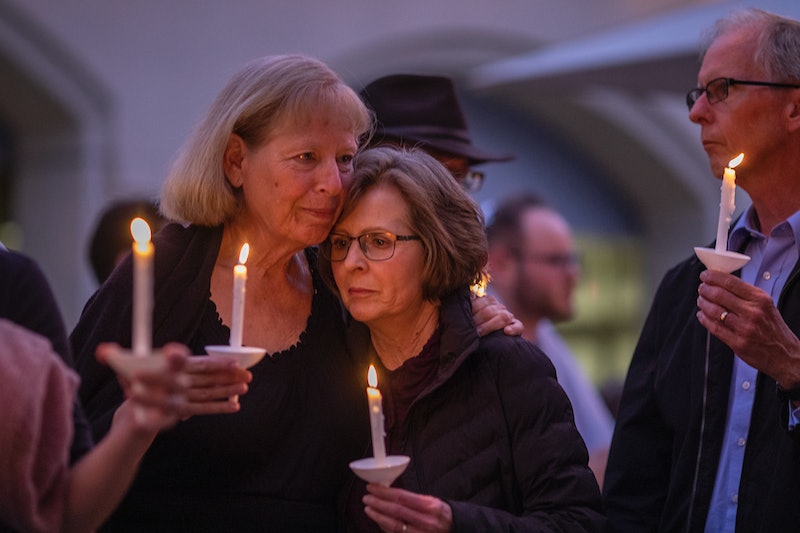 As the Poway community grapples with Saturday's tragedy, you may be wondering how to donate to the Chabad of Poway shooting victims, in order to support the synagogue and its members. As of Sunday afternoon, there are at least two venues to do so. Funds being collected, according to campaigns, will go directly to the synagogue.

On Saturday, a gunman attacked the Chabad of Poway, located near San Diego, according to The Washington Post. Reports indicate that the gunman killed one woman and injured three other people, including one rabbi and an 8-year-old. If you have the resources, donating money to the Chabad of Poway could help assist the synagogue in facilitating funeral and medical expenses.

One fundraising campaign is operating on GoFundMe.

"The attack was a hate crime," the campaign description reads. "Even though the shooting took place mid-service, the Rabbi continued to deliver his sermon and prayers. Please donate to the Poway Chabad in order to raise money for the victims of the terrible shooting and their synagogue."

The description also notes that "the charity these funds are directed to is a certified, verified non-profit and any money donated will go directly to the Poway Chabad." As of Sunday afternoon, the campaign had raised a little over $50,000 worth of its $118,000 goal.

"I do not worship at the Chabad of Poway, but I belong to another house of worship and seeing a place of prayer attacked horrified me and motivated me to start this campaign," the person behind the campaign, identified only as "Cam N." wrote in the description. Beyond funerals and medical bills, collected funds, according to the page, will be used to cover "synagogue reparations or anything else the synagogue would need assistance with."

There is also an alternative to the current GoFundMe campaign. The synagogue, itself, is also running a fundraiser, per its website.

"We are heartbroken and pained by the attack that took place on the last day of Pesach, during services, at Chabad of Poway, CA," the synagogue's fundraiser description says. "This is an attack on all of us, and we grieve for the family of Lori Gilbert-Kaye who lost her life and pray for the recovery of Noya Dahan (age 8), Alon Peretz, and Rabbi Yisroel Goldstein, who are injured."

The fundraiser description also thanked "all of those who checked in on us here and showed their care and support, as well as local law enforcement. We appreciate your support during this time of need."

It will undoubtedly take time for the Chabad of Poway and its surrounding community to heal from Saturday's tragic events. But what fundraising campaigns can do in these types of difficult situations is provide the chance for onlookers to extend an offering of support. Although violence and tragedy can feel isolating and alienating, both the GoFundMe and the synagogue's direct fundraising campaign have allowed people inside and outside of the immediate community the opportunity to show members of the Chabad of Poway that they are not alone.