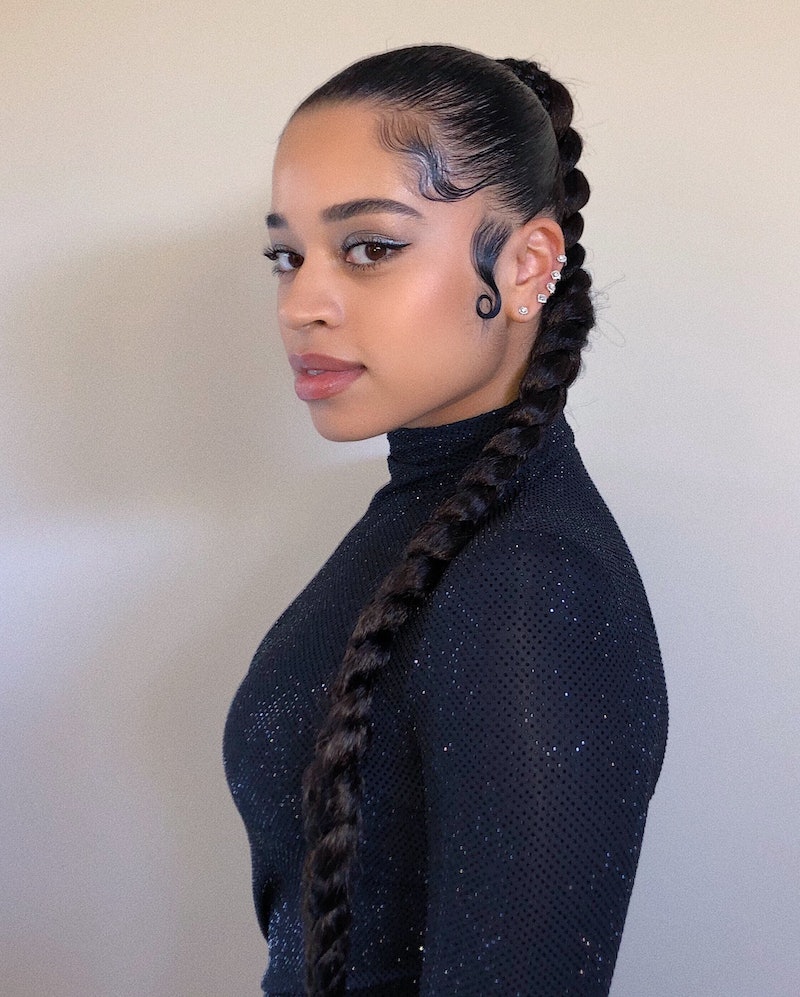 On Sunday, singer Ella Mai stepped out onto the American Music Awards red carpet and quite literally lit it up. But I'm not just talking about her shimmery black turtleneck mini dress that sparkled as the cameras flashed — I'm talking about the disco eye that really stole the show. It was sophisticated in a way that most glitter eyes have a hard time being, but still emanated a playful vibe that made us want to recreate it this holiday season. After all, what's more festive than a brilliant eye? The short answer: nothing. If you're looking to elevate your glitter eyeshadow for your next holiday shindig, here's how to do it, according to Ella Mai's makeup artist herself.

Celebrity makeup artist Emily Cheng is responsible for some of the most glamorous faces in Hollywood, including Yara Shahidi, Kerry Washington, Diane Kruger, and of course, Ella Mai. While Cheng is responsible for creating the looks, she tells Bustle that she likes to communicate with her clients on what aesthetic they want to achieve beforehand. In this case, Mai told Cheng that she wanted a look that would match her dress, but maintained an elegant and clean vibe.

"For this look we discussed the idea of doing an eye that would further draw out the gems and sparkle on her dress. We both agreed that silver would be the perfect pop of color so my inspiration was to do a subtle disco ball-like eye, which is perfect to tie in with the holiday season," Cheng tells Bustle.

To begin, Cheng pressed on cult-favorite highlighter Fenty Diamond Ball-Out all over the lid and blended the crease in using the grey from the Chanel Les 4 Ombres Quadra Palette. Then using the lightest shade from the same Chanel palette, she blended upwards to Mai's brow bone and also tapped in the inner corner of the eye. This softened the highlighter and created the perfect base for the glitter.

The pièce de résistance? Lemonhead's Spacejam Ultra Luxe Glitter Balm in Midnight Society (the same brand behind Beyoncé's glittery Coachella look). Picking up a small amount of the glitter balm, Cheng pressed it into the inner corner of Mai's eye, bringing it in just slightly onto the lid.

To give the eye a little more dimension, Cheng smudged Chanel Calligraphie de Chanel Cream Eyeliner in Hyperblack into the lash line and then created a small wing. Pro tip: To sculpt and sharpen the wing, Chen recommends using small Q-tips. To finish, she curled Mai's lashes and applied Too Faced Better Than Sex (the waterproof formula) on the top and bottom lashes, doing three coats on top and two on the bottom.

If Cheng's process is a few too many steps for you, here's her quick tips for achieving a simple, but stylish glitter eye. "Apply a bright shadow underneath a glitter version of the same shade in eyeliner form or dab [glitter] on the center of the eyelid — these are easy ways to recreate a sparkly holiday eye while keeping it sophisticated," Cheng says.

Lastly, to let your glittery eye stand out, Cheng suggests keeping your lips natural, using a sheer lipstick like Chanel Rouge Coco Flash in Chicness, which she used on Mai.

Above all, Cheng wants to remind everyone to have fun when creating their looks — it's glitter after all!