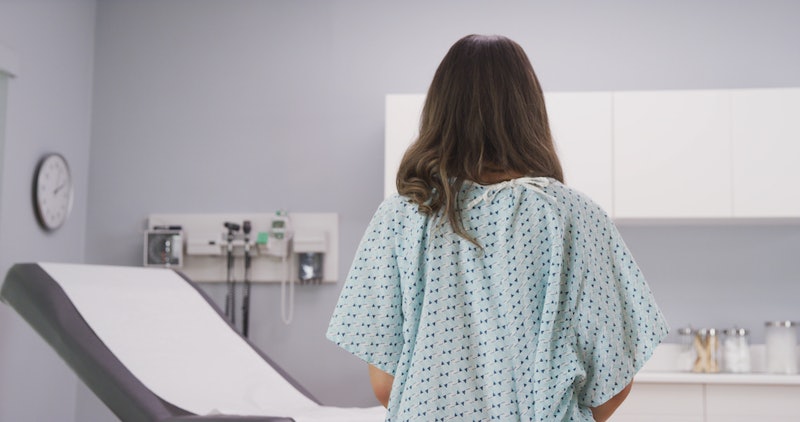 Finding a doctor shouldn't be that difficult, but between scheduling and insurance, it's already a lot of hoops to jump through. Add in a chronic illness that doctors may not be familiar with, and it can feel nearly impossible. Living with chronic fatigue syndrome, also known as myalgic encephalomyelitis (ME/CFS), can mean searching for a diagnosis for a long time — and then, working with a doctor to help you manage it. Finding a doctor who can treat CFS/ME effectively can be a frustrating feat for patients, since many physicians don’t fully understand the condition, but it can be done.

ME/CFS is *not* just being tired — it’s much, much worse. Since ME/CFS can’t be detected via blood tests (yet), doctors diagnose it via a process of exclusion. They basically rule out every other possible illness, while observing the symptoms that the patient is reporting in order to conclude that ME/CFS is the underlying disorder.

“Because ME/CFS has a history of being seen as a diagnosis of exclusion, many people get stuck having to rule every other relevant diagnosis by receiving full work-ups and often extensive lab testing in endocrinology, rheumatology, infectious disease, neurology, psychiatry, and other medical specializations as well. This process can take years,” Ryan Prior, a CNN journalist, member of the board of directors for the ME Action Network, and co-director/producer of Forgotten Plague tells Bustle via email.

"People with ME/CFS often may not 'look sick,' and, as such, it’s often referred to as an invisible illness — especially for patients who have more daily functioning ability," Adriane Tillman of the MEAction Network tells Bustle via email.

According to Bustle writer Carolyn Steber in a previous report, the causes of ME/CFS are unknown, but may include gut diseases, nutritional deficiencies, adrenal insufficiency, or a cascade of factors that cause the body to ‘burn out’. The Centers for Disease Control (CDC) also say that ME/CFS might be triggered by infections or viruses. The illness may also involve underlying genetic risk factors. Solve ME/CFS says that, although research shows that ME/CFS is about two to four times more likely to occur in women than men, ME/CFS affects people from every age, racial, ethnic, and socioeconomic group.

According to a 2017 study published in the Journal of Health Psychology, medical bias and misleading information about ME/CFS can lead to ineffective treatments, misdiagnosis, invalidation, gaslighting, and an overall demeaning experience for ME/CFS patients seeking medical help.

“For me [getting diagnosed] took about six months, and I needed to see about 16 doctors in the process,” Prior says. “While the number of doctors I saw is painfully normal for many who will ultimately get this diagnosis, I had parents, including a mother who is a nurse, able to help me jump through the hoops in the medical system compared with others. It often can take years for people to get the right diagnosis.”

Finding a doctor who understands this complex condition is central to ME/CFS recovery and management, and many patients can improve over time. Verywell Health suggests that, if your primary care doctor isn’t well versed on the illness, then ask for a referral. The American Myalgic Encephalomyelitis and Chronic Fatigue Syndrome Society also offers a CFS/ME Physician and Clinic database. Online support groups, and advocacy groups like The Solve ME/CFS Initiative, and the ME Action Network, may also be able to help.

"In practice, this means that someone with the symptoms of ME/CFS can spend years going from doctor to doctor unable to find a diagnosis because the doctor does not know to even look for this disease. Without an explanation for the symptoms, doctors often diagnose patients as depressed, which not only does not treat the patient's disease; it stigmatizes and contributes to the disbelief of people with ME/CFS.”

In order to optimize your chances at managing this disorder, it’s important to “Hold your doctors accountable,” Prior says. “Do your research ahead of time. Come armed with facts, not just from medical journals. Carefully document every conceivable aspect of your symptoms. This is helpful for the doctor and will make them take your case seriously. But it’s also helpful for you in finding your tricks to beat back the disease.”

Prior also recommends that you “push back on anything they say that you find demeaning, lackluster, or inadequate. Demand to be treated with dignity and respect, and don’t let them give you short shrift.” Having an ally go with you to appointments, like a family member, partner, or a close friend, is also important Prior says. Given that ME/CFS is still so often misunderstood in the medical field, arming yourself with both knowledge and support is key.

“The most successful patients will need to radically re-orient their worldview, quickly accepting the fact that their world has been fundamentally changed,” notes Prior. “Improvement requires lengthy, profound periods of rest. It requires surrounding yourself with people who love you and who will aid in your recovery, who will deliver groceries to you, or who will spend time with you at home when you’re too sick to go out. It requires incredible amounts of patience, and an abiding faith, that despite sometimes temporary setbacks, that a longer-term improvement can be possible.”

Despite the challenges that people with ME/CFS face, help is available. By making the most of online resources, seeking out help from allies and loved ones, and doing your best to find a doctor who can support you, some degree of recovery can happen — and some patients recover entirely. While managing ME/CFS is not necessarily easy, and there is no cure at this point, improvement may be possible over time.