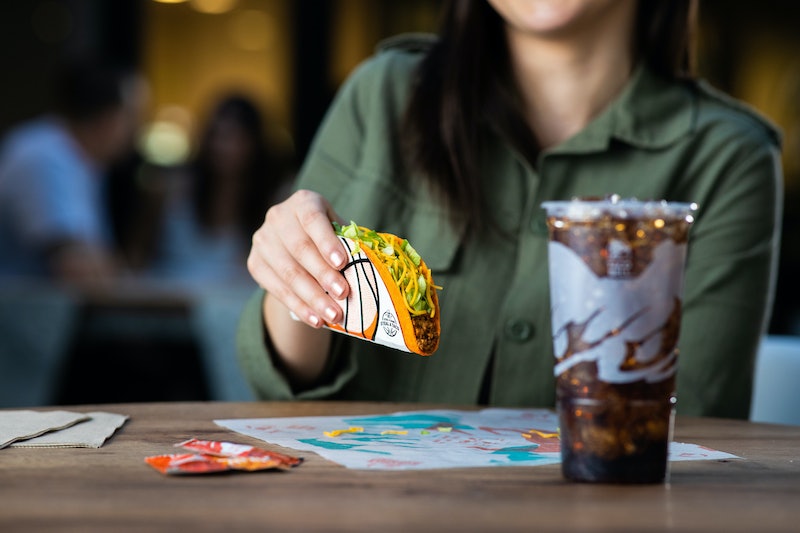 If you need something to look forward in the coming weeks besides warmer weather and dwindling conversation about Game of Thrones, Taco Bell is giving out free Doritos Locos Tacos in June. I will say that again, slower, and with more random words capitalized: TACO BELL...is giving out...FREE TACOS. This is not a drill. It is not a test. Your eyes do not deceive you. There are free tacos in your future, but there is, of course, something of a catch.

On Tuesday, June 18, Taco Bell is giving all customers at all its U.S. locations a Doritos Locos Taco for zero dollars and zero cents ($0.00) between 2 p.m. to 6 p.m. All you have to do it show up and presto chango, a taco for free!

The free taco is part of the chain’s “Steal a Game, Steal a Taco” promotion, which has been going on in concurrence with the NBA Finals for the past three years. Per a press release, “Taco Bell’s first “Steal a Game, Steal a Taco” appearance took place in 2016, where the Golden State Warriors “stole” Game 4 of the NBA Finals against the Cleveland Cavaliers, winning everyone a free Doritos Locos Tacos and starting a new taco tradition for years to come.”

Here’s how the promotion works, according to the “Steal a Game, Steal a Taco” website: “If either team steals a road win in the NBA finals, all of America gets to steal a free Doritos Locos Taco.” Suddenly, I care a lot about basketball.

“While one G.O.A.T. didn’t make it to this year’s NBA Finals (sry, King James), another G.O.A.T. did: the Doritos Locos Taco,” a Taco Bell rep wrote in a statement, per Cosmo. “Making its fourth NBA Finals appearance, Taco Bell is bringing back its ‘Steal a Game, Steal a Taco’ promotion for the 2019 Finals.”

The NBA finals start on Thursday, May 31. Basically, if an NBA team wins on the road anytime between May 30 and June 16, you get a free Doritos Locos Taco. So, if you don’t usually pay attention to the NBA finals, there’s one cheesy and delicious reason why you might want to.

The NBA promo is the same concept at the “Steal a Base, Steal a Taco” promo Taco Bell ran during the MLB World Series. On November 1, 2018, baseball fans and Taco Bell fans alike got a free taco because Red Sox outfielder, Mookie Betts stole a base during a World Series game.

It feels wrong to root for someone to lose, but it feels so, so right to root for free tacos.

Because nothing brings me joy quite like the feigned written excitement of marketing execs, please enjoy this quote from Taco Bell’s global chief brand officer Marisa Thalberg: “We’re excited to partner with the league for the NBA Finals once again, allowing sports and taco fans nationwide to unite over one thing—rooting for tacos.” Thalberg continued, “Regardless of which two teams make it to the finals, we look forward to giving all fans, no matter the jersey they prefer to wear, the chance to win with everyone’s G.O.A.T (Greatest of All Tacos), the Taco Bell Doritos Locos Taco.” Whether or not the Doritos Locos Taco is the GOAT is debatable, but any free taco is a good taco in my book.

If you have absolutely no idea what a Doritos Locos Taco is, bless your sweet, pure heart. Taco Bell describes the Doritos Loco Taco as having “the same great taste of a Crunchy Taco — just like its supreme version — but with the shell made out of Doritos tortilla chips.”

They come in Cool Ranch, Nacho Cheese, or Fiery. They are all your drunk food desires in one. And hopefully, on June 18, they will be free.