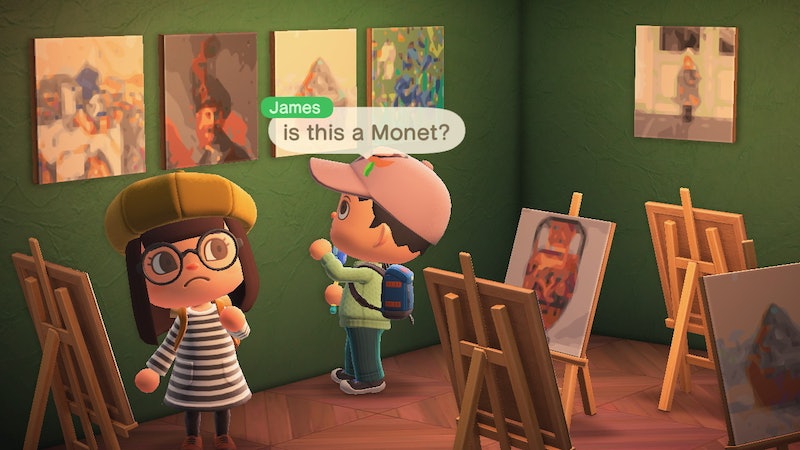 There's a hell of a lot to do in Animal Crossing: New Horizons, but there's actually a major part of the series missing — collecting paintings. In previous games, players could purchase pieces from Tom Nook and his nephews, or by visiting the sly fox Redd. Until this mechanic is (hopefully) added, the L.A. based Getty Museum is helping players by recreating famous pieces of art that you can download straight into your game. So here's how to get famous artwork in Animal Crossing: New Horizons, which can be used to decorate your home and even as designs on clothing and other items.

What Is The Getty Museum?

Located in Brentwood and Malibu, the J. Paul Getty Museum and Getty Villa house "European paintings, drawings, sculpture, illuminated manuscripts, decorative arts," as detailed on its about page, "from its beginnings to the present, gathered internationally." These include the works of Pontormo, Turner, Monet, and Van Gogh.

How Has Museum Made Their Collection Available On New Horizons?

The museum has an open access collection online, which has over 100,000 images available to view and download without charge. Getty has utilised this tool to create the Animal Crossing Art Generator, which helps players add the artwork featured in the museum's collection to their game in a variety of ways.

You can also use artwork from other museums using the IIIF (International Image Interoperability Framework) which provides access to digital images — in this case paintings. So if your favourite piece of artwork isn't available through the Getty, you'll more than likely find it in other museums.

How Do You Download & Use Getty Artworks On Your Island?

After you've selected the artwork you want to use, you then have to crop it down to size for it to be imported into your game. The Getty's AC Art Generator will then create a QR code, which you can add to your game via the Designs app on NookLink.

How Do I Get NookLink?

NookLink is a companion app to New Horizons through Nintendo Switch Online. You'll need a subscription to the service, which is £3.49 a month, £6.99 for three months, or £17.99 a year.

To access NookLink, you need to download the Nintendo Switch Online app to your phone, and open up the New Horizons tab at the bottom of the screen. After opening the Design app, you'll be prompted to scan the QR code of your chosen artwork.

After scanning (and saving) the code, open up your game and access the settings. Here, ask Tom Nook to sort out your NookLink settings to connect your mobile device to your Switch. When in game, open up your NookPhone to access the Custom Designs app, press + to download your new pattern to a blank design, and voilà! You've now got a world-famous art print to display on your island.

Is The Art Collecting Mechanic Expected To Return?

There's no official word from Nintendo that it's coming back, but thanks to some digging by dataminer Ninji, there's a high chance it could be returning.

By extensively scouring the game's code, Ninji has come across a reference to Redd, and it seems that the sly may be docking up on your private beach (at the back of your island) sometime soon to sell some counterfeit art. With that in mind, it wouldn't be surprising if the option to buy art would become available in Nook's Cranny as well.

But as Eurogamer points out, "development plans change, and the references could just be cut content" — i.e. while they may be in the code, they won't necessarily be added to the game in future updates.