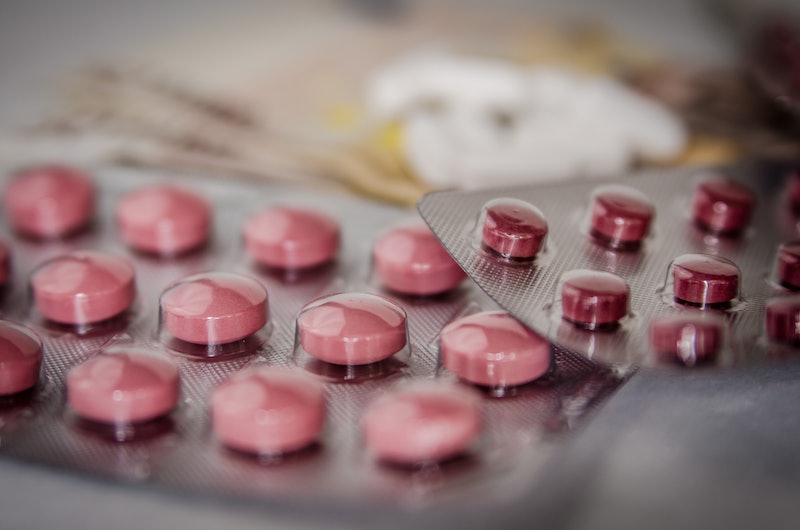 Following Donald Trump's election to office, many Americans have been wondering how they're going to access birth control under the coming conservative administration. The good news is that this month, it's possible to get free birth control from Nurx with some perhaps unexpected help from Trump. With news emerging this week that the president-elect's administration still appears to have their sights set on repealing the Affordable Care Act (ACA) — which, among other things, provides free birth control to people who may otherwise be unable to access it — it's a welcome gesture of support; there's nothing quite as comforting as being able to enjoy family planning and a sense of delicious irony at the same time.

Sometimes described as the "Uber for birth control," the Nurx app allows users to obtain birth control and have it delivered straight to their door without having to make a doctor's appointment. For patients with health insurance, the service is free or the cost of a copay; for those with no insurance, the app offers a number of low-cost generic options. Last February, it added the delivery of PrEP, an anti-HIV medication, to its services as well.

On Wednesday, the app began running a promotion: From now until January 31, users who use the code "TinyHands" at checkout will receive $45 in credit. If you paid even the slightest attention to the presidential election, you'll recognize the coupon code as a reference to the "Trump's hands" meme. The meme arose during the election cycle through a combination of a deep dive into history (a writer for Spy Magazine now famously called Trump a "short-fingered vulgarian" in the '80s, a phrase which was brought back into the public eye by a Vanity Fair piece in November of 2015), John Oliver's first notable Trump segment on Last Week Tonight, and Marco Rubio at one point publicly ridiculing their size.

The promotion is a response to worries about the fate of the ACA's free birth control mandate under the Trump administration. Under the act as it stands today, health insurance plans are required to cover at least one FDA-approved birth control method at no cost. Trump himself is notoriously difficult to predict, but his pick for the head of Health and Human Services, Tom Price, opposes the mandate.

On Tuesday, vice president-elect Mike Pence met with congressional Republicans about repealing and replacing the ACA. The following day, he tweeted a reaffirmation of the administration's intentions. "Our [first] order of business will be to repeal [and] replace Obamacare," he tweeted.

That's what led Nurx to create the current promotion. "Donald Trump has said repeatedly that he wants to repeal the Affordable Care Act, and that would mean that millions of women would lose access to free birth control," said co-founder and CEO of Nurx, Hans Gangeskar, in a press release. "This motivated us to figure out a way to help make contraception even more accessible."

According to research from the Guttmacher Institute, 27 percent of women in the United States received their birth control through a publicly funded clinic in 2015, and among low-income women, that number rose to 44 percent. When women are able to easily access birth control, the results are readily apparent: In 2012, research from the Washington University School of Medicine found that when women were provided free birth control for three years, the rate of unintended pregnancy and abortion plummeted.

If you're interested, here's how to use the discount: First, make sure you live in a state where the app is available — currently, those states are California, New York, Washington, D.C., and Washington state. Next, download the app and set up your account. Once you've entered your information (including insurance, if you have it) and chosen your preferred birth control, enter the code "TinyHands" at checkout. A doctor will review your request and write the prescription; after that, the birth control is delivered straight to your door. The code expires at the end of the month, so make sure you use it before then.

Nurx's promotion isn't going to singlehandedly save the ACA, and obviously, birth control is already free (or close to it) if you have health insurance. But for women without insurance, Nurx offers options starting at $15, so a $45 credit should provide three months of birth control — enough to get users through the first few months of Trump's administration.

Not only does the offer provide free birth control, but it's also a pointed statement to the president-elect. With his inauguration inching ever closer, I'd say we could all use a pick-me-up.

More like this
Dyson Is Dropping Futuristic, Air-Purifying Headphones
By Rachel Lapidos
This AI Filter Shows How You’d Look In Different Time Periods
By Alexis Morillo
65 Funny Dares You Can Send Your Friends Over Text
By Siena Gagliano
Here’s How To Find Your Spotify Wrapped
By Emma Lord and Emma Carey
Get Even More From Bustle — Sign Up For The Newsletter