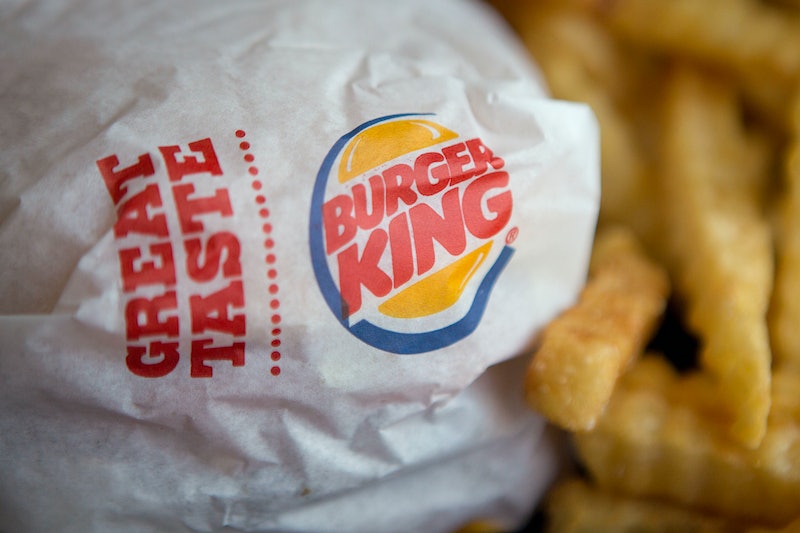 Time to delve into the depths of your tagged Facebook photos, friends. In honor/spite of Valentine’s Day, Burger King will let you trade a photo of your ex for a free Whopper, as reported by Delish. Finally, the romantic upgrade you’re looking for. Yes, a burger is romantic. There is no greater love than the one between a person and their Whopper.

On Valentine’s Day, you’ll be able to bring a printed-off picture of you and your ex to select Burger King locations as payment for a Whopper. Yes, the photo has to be printed off. No slyly showing a tagged Instagram photo or covertly scrolling through a hidden photo album on your phone. You must acknowledge your dating past in analog form. If you’re in New York City, you’ll also be able to bring in past relationship paraphernalia like letters, stuffed animals, or certain items of clothing in exchange for a free Whopper.

Like your relationship with your ex, the deal comes with quite a few hang-ups. For starters, the promotion is only available in four U.S. Burger King locations. If you’re in New York, San Francisco, Los Angeles, or Boston, you’re in luck.

Here are the four Burger King locations where you’ll be able to redeem the ex-for-a-Whopper deal:

At the San Francisco, Los Angeles, and Boston, the deal is only valid on Feb. 14. If you live near the New York location, you’ll be able to show up with a picture of your ex between Feb. 14 through Feb. 16 to get a free Whopper. Also, the deal, which comes in partnership with the release of Warner Bros. Harley Quinn movie Birds of Prey, is only good for the OG Whopper. No Impossible Whopper substitutions, unfortunately.

If you don’t happen to live in one of the four aforementioned cities but are still trying to get free food in exchange for bad past relationships, there is hope. In fact, Burger King is not the only restaurant change giving away free food for photos of your ex. Hooters is running a Valentine’s Day deal where you can shred a photo of your ex for free Hooters wings.

Just go to their “Shred Your Ex” site and fill in some details about your ex of choice like how long you dated, how you broke up, and how bad the split was on a scale of “Miley and Liam” to “Prince Harry and the Royal Family.” Then, you can upload a photo of your ex to either digitally shred, bury, burn, or throw a dart at. That kind of catharsis works up an appetite, so you’ll be able to enter your email address to get a coupon for 10 free boneless wings when you buy 10 wings this Valentine’s Day. You’ll also get a code to text for a chance to win a premium Bumble subscription if you’re looking to actually get back into the dating pool.

If your heart is set on Burger King, you can also get discounted food through the Burger King app. BK is launching an in-app quiz. If you answer four of the five correctly, you can get a $3 Whopper. And you won’t to show anyone that humiliating picture of you and your ex.

Cheers to free food and having bad taste in significant others!