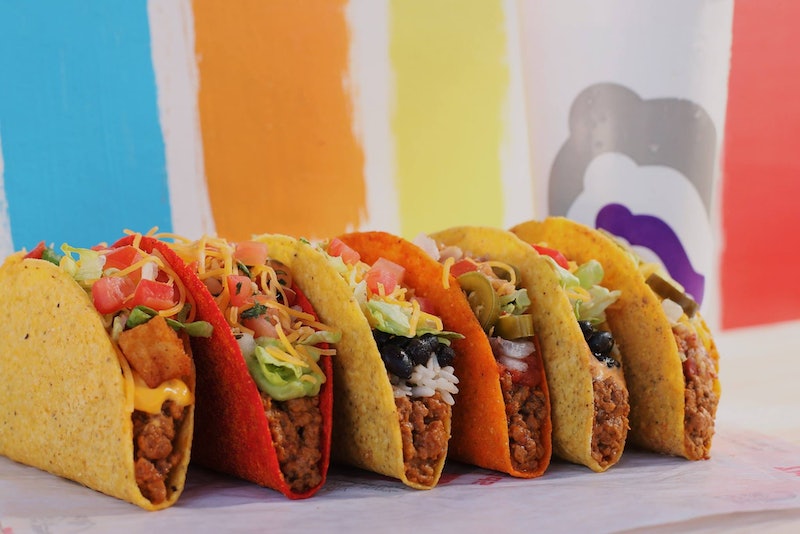 The sun is shining, the birds are singing, and today is a glorious day to be alive: On Tuesday, June 13, 2017, you can get a free Doritos Locos Taco from Taco Bell, thanks to the combination of Taco Bell’s Steal A Game, Steal A Taco promotion and the outcome of Game 3 of the 2017 NBA Finals. On June 7, the Golden State Warriors faced off against the Cleveland Cavaliers and came out on top — and we all get free tacos as a result. Everybody wins!

First things first, though: What exactly does it mean to “steal” a game? For Taco Bell’s purposes, a “stolen” game is a game that’s won by the road team, rather than the team playing on their home turf. According to the Steal A Game, Steal A Taco rules, if a stolen game occurs during Game 1, 2, or 3 of the NBA Finals, the promotion window for free tacos happens on Tuesday, June 13, 2017; however, if a stolen game occurs during Game 4, 5, 6, or 7, the free taco window happens the following Tuesday, June 20, 2017. Game 3 of the NBA Finals was played at the Quickens Loan Arena in downtown Cleveland on June 7, which means the Warriors were the road team — and since they won the game 118-113, today is officially free taco day. Hoorah!

This isn’t Steal A Game, Steal A Taco’s first moment in the sun; in 2016, free taco day occurred on June 21… after the Golden State Warriors beat the Cleveland Cavaliers 108-97 in Game 4 of the 2016 NBA Finals. The Cavaliers don’t seem to have much luck when it comes to Steal A Game, Steal A Taco — but at least they can get their taco on as a result of their loss, right?

Here’s what to do to get your free Doritos Locos taco today: