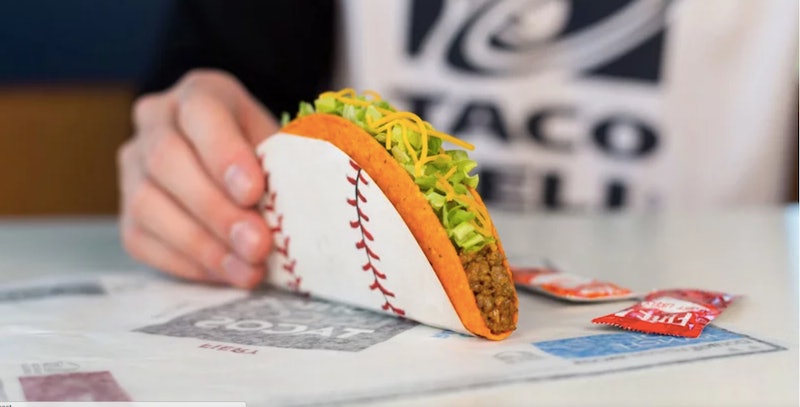 I don’t really follow baseball, but I tend to pay a little closer attention to the sport during the World Series — mostly because the games sometimes result in the chance to get free Taco Bell. And hey, guess what? You can get a free Doritos Locos Taco at Taco Bell on Nov. 1, thanks to the 2018 edition of the Steal A Base, Steal A Taco promotion. Mookie Betts stole a base for the Red Sox during Game 1 of this year's World Series — and that means tacos for everyone! Hoorah!

Steal A Base, Steal A Taco, wherein Taco Bell gives out free food after the first base is stolen during the World Series, has been occurring since 2007, so, y’know, snaps for the impressive longevity, Taco Bell. According to MLB.com, that year’s free taco came courtesy of Jacob Ellsbury’s stolen base for the Boston Red Sox in Game 2 against the Colorado Rockies. (Ironically, Ellsbury defected to the Yankees in 2014.) Other stolen bases that resulted in free tacos came from Jason Bartlett for the Tampa Bay Rays in 2008, Angel Pagan for the San Francisco Giants in 2012, Lorenzo Cain for the Kansas City Royals in 2015, Francisco Lindor for the Cleveland Indians in 2016, and Cameron Maybin for the Houston Astros in 2017.

(I’m assuming that the missing years either didn’t see any bases stolen or just didn’t feature the promo. Not every year is a winner.)

The 2018 World Series kicked off on Tuesday, Oct. 23 — and wouldn’t you know it? The first stolen base was taken that very day. Mookie Betts nabbed one for the Red Sox against the Los Angeles Dodgers, making this the second time in the past 12 years we’ve received free tacos from Taco Bell courtesy of the Sox. As a native Bostonian, I consider that a point of hometown pride.

The beauty of the Steal A Base, Steal A Taco promo is that the taco really is free — you don’t have to purchase anything else in order to get it. All you have to do is show up at a participating Taco Bell location in any of the 50 states or the District of Columbia at the correct time on the correct date and ask for it. In 2018, the correct time is between 2 p.m. and 6 p.m. local time and the correct date is Nov. 1 — which, for the curious, is a Thursday. Next Thursday, in fact. Hoorah! The offer is good for one Doritos Locos Taco per person. (The Doritos Locos Taco Supreme is excluded, though. Sorry.)

The Sox have won both of the games played so far in this World Series; Tuesday’s game finished up with a score of four for the Dodgers and eight for the Sox, while on Wednesday, it came out to two for the Dodgers and four for the Sox. There are still five games to go, of course, so the tide could definitely turn — but two back-to-back wins is a pretty comfortable way to start.

Head here to find out where your nearest Taco Bell is. You can also check out the fine print for Steal A Base, Steal A Taco here if you’re, uh, curious about that. Happy munching!