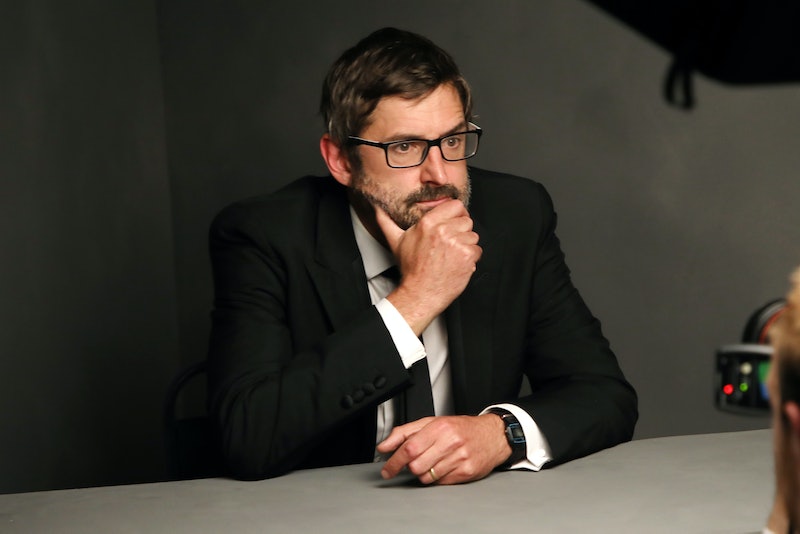 For two decades, one man has immersed himself in some of the weirdest and wildest subcultures, examined almost every facet of the human identity, and kickstarted conversation on some hugely important topics. Naturally, I'm talking about Louis Theroux. Now, the 49-year-old has written a memoir, allowing fans to get a glimpse of the man behind the documentaries. And, to celebrate its release, he is doing a handful of appearances across the nation. So if you want to get tickets to Theroux's miniature book tour, here's how.

Gotta Get Theroux This: My Life and Strange Times in Television is the appropriately witty title of the presenter's autobiography. Published Sep. 19, it delves into the journey of his life, from his first "awkward" TV experience to fronting an entire series and becoming one of the nation's most recognisable documentary faces. It also explores all the characters he has met in between and reveals Theroux's true feelings about certain individuals.

Three live events have so far been planned. On Sep. 17, Theroux will be appearing at Lion Quays Hotel in Oswestry in Shropshire to discuss his book and career. The event will begin at 7:30 p.m and will also feature an audience Q&A as well as photo opportunities. Unfortunately, it has sold out, but keep checking the events page in case of ticket cancellations.

A day later, on Sep. 18, Theroux will be travelling to Waterstones' Manchester Deangate store at 12 p.m. to sign copies. And on Sep. 25, he will be on stage at London's Southbank Centre for an insightful 90-minute conversation. There, he will touch on every aspect of his career, including his feelings on documenting Jimmy Savile and later learning about the numerous sexual assault allegations against Savile. Tickets to this evening event cost between £15 and £35, and you can order a discounted copy of Theroux's book.

The documentary-maker will also take to the interviewer chair once again for another book-related event. This time though, he won't be focusing on his own words, but the work of another author. Megan Phelps-Roper, a former member of the controversial Westboro Baptist Church, has penned a memoir on her religious upbringing and her eventual exit from both the church and her family.

On Nov. 12, Theroux — who first examined the church for his 2007 documentary, The Most Hated Family in America — will interview Phelps-Roper in London at St James's Church in Piccadilly. Starting at 7 p.m., tickets cost £28 and include a copy of the powerful book.

Gotta Get Theroux This (Signed Edition) by Louis Theroux
Waterstones

That's not all Theroux has got in store for fans. This autumn, his latest BBC Two documentary, Louis Theroux: Selling Sex, will be broadcast, reports The Times. In it, Theroux meets women "legally providing sexual services, either to make a living or to supplement their income" and explores whether the industry is exploitative or, in some ways, empowering.

It has already been mired in controversy. Two participants, reports the Independent, claimed the documentary was "pushing" stereotypes about sex workers, rather than trying to change the narrative. The BBC responded: "We have addressed their concerns in the final edit of the film, and have listened to their comments throughout the filming process."

In an interview with The Times, Theroux also touched on the complaint, saying: "Actually, if I’m honest, I feel as though we put such a lot of work into doing it the right way. And there’s so much transparency. I’m not trying to polish my halo, but in general what I experience, if anything, is the reverse: a sense that people have been helped. I don’t just mean the contributors; I mean people who have seen the programmes.”

Gotta Get Theroux This: My Life and Strange Times in Television releases Sep. 19. Louis Theroux: Selling Sex is scheduled to air on BBC Two this autumn.