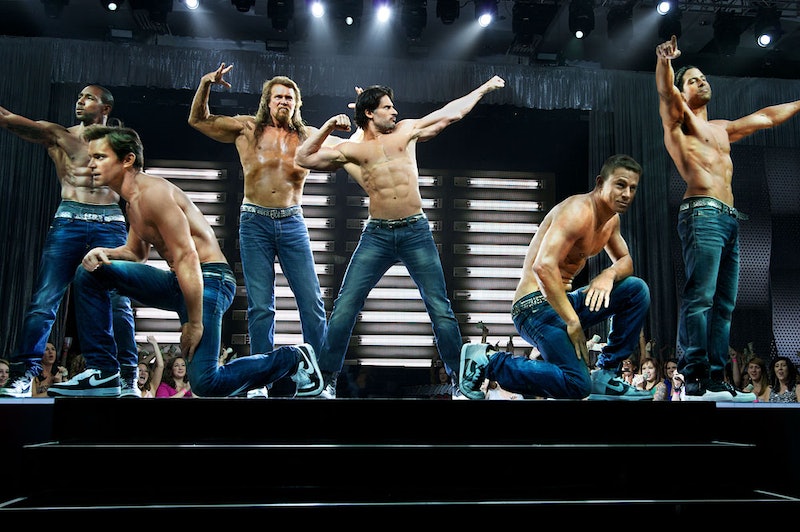 Following the announcement of Magic Mike Live coming to London during the Britain’s Got Talent final on June 3, it’s no surprise that as a nation we all lost our damn minds. If you have your eyes set on seeing it ASAP, you’ll want to know how to get tickets for Magic Mike Live London because — understandably — the tickets are selling faster than the guys took their shirts off on BGT.

Ticketmaster have got you covered, with tickets starting from a heavenly £29. If you’re wanting to see the show the month it debuts, you’re outta luck. Around 15,000 tickets were sold within the hour that they went on sale, according to the Evening Standard. So, it’s no surprise that November has already sold out (Magic Mike Live’s official site, they are listed as “limited availability”).

February through to April has the best availability, while January has “great midweek availability,” and December is now limited. If you have the patience of a saint, the 2019 shows will be just right. There are also package deals that are available, which include group tickets and an opportunity to meet and greet the cast.

Sadly, there’s still no word as to whether Channing Tatum will officially make an appearance during any of the performances. Whilst shooting some promotional photos for the show this week in Piccadilly Circus, Tatum did hint at the chance of being a part of it to the Evening Standard:

Grr, Tatum. Just come out and say it already. At least if he doesn't show up to any of the London performances (my bet is that he will), we'll still forever be able to watch him do his thing in Magic Mike and Magic Mike XXL.

Although by the look of the cast, the will he/won't he regarding Tatum will be an afterthought. There's still no word as to who the cast officially is — other than Dreamboys star Lotan Carter. That uncertainty is certainly not going to stop the UK— and David Walliams — from watching that BGT performance repeatedly whilst we wait for more info and the previews to start.

Even though Magic Mike Live seems to only be running from November 2018 to April 2019, there is no doubt in my mind that it's going to outlast it's forecast residency. If Magic Mike Live Las Vegas is anything to go by, Leicester Square's Hippodrome will be Magic Mike's home for not just months, but years. Looking at the booking rates on Vegas.com, the original incarnation is pretty damn popular and in very high demand for a show that began two years ago.

It's even been hailed as a "feminist anthem" on Hypable, where the show is said to be better than Britney's residency and Cirque De Soleil (now that's an amazing feat.) There's also the fact that the MC of the show is a woman, who is "awesome and delightful and thinks the guys are just as hot as we do." There's no doubt that Magic Mike Live London will emulate similar feelings of passion.

If this doesn't make you want to head to Ticketmaster right now and book multiple nights at the Hippodrome, I don't know what will. Maybe a double-bill of Magic Mike and Magic Mike XXL will do the trick.

More like this
Adam Lambert Called Out The George Michael Biopic Over Potential Casting
By Sam Ramsden
You’ll Definitely Recognise The Stars Of Amy Winehouse’s Biopic
By Maxine Harrison
Theo James Would “Love” To Star In George Michael Biopic
By Sam Ramsden
Lisa Marie Presley's Secret Granddaughter Was Revealed At Her Funeral Out Of Nowhere
By Jake Viswanath
Get The Very Best Of Bustle/UK
Sign up for Bustle UK's twice-weekly newsletter, featuring the latest must-watch TV, moving personal stories, and expert advice on the hottest viral buys.