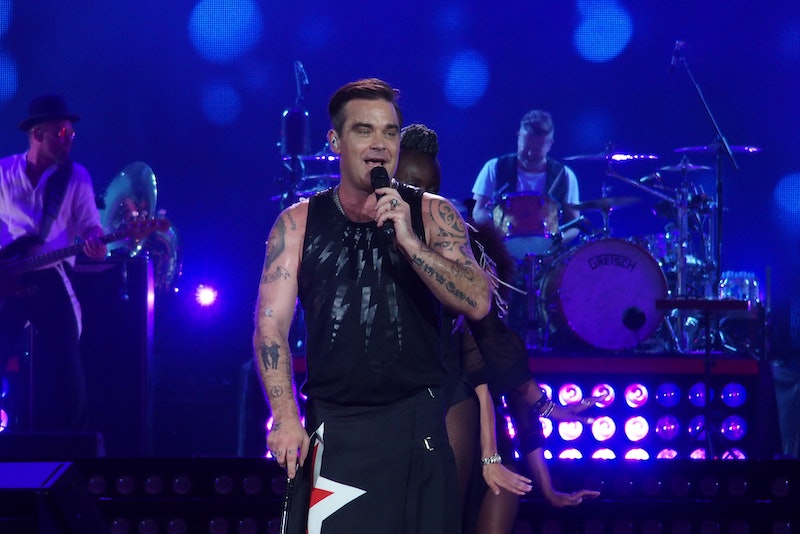 Since day dot of his career, Robbie Williams has proven himself to be not only a fan favourite, but a true showman. Whether it's as a part of boy band Take That, alongside artists like Kylie Minogue, or just on his toblerone — the man gives his fans real value for money. If you've not been to one before, now's the time to find out how to get tickets for Robbie Williams' Christmas 2019 show.

Tickets are already on sale so head to AXS this very minute and, you guys, they're selling like hot cakes. The two shows on Dec. 16 and 17. The show, which will be held at the internationally renowned Wembley Stadium, will see him perform songs from his double Christmas album The Christmas Present, which is made up of Christmas Past & Christmas Future. The album is due out on Nov. 22 this year and will see collaborations between Williams and stars like Bryan Adams, Jamie Cullum, Rod Stewart, and even Tommy Fury's brother Tyson Fury.

The Wembley dates are going to be the first show Williams has done in London since his turn at British Summer Time at Hyde Park this past summer.

This is Williams first ever Christmas album and you bet that when he let fans in on the news, they were pretty excited. The Independent shared a statement from the singer, where he shared how thrilled he was about his new festive AF album:

"I'm beyond excited to announce my first ever Christmas album. I've done a lot in my career and releasing this record is another dream come true. Making this album has been so much fun and I can't wait for you all to hear it."

Williams has been embroiled in an ongoing legal battle with his neighbour over a basement extension to his London home recently. The neighbour in question is rock legend Jimmy Paige, and the case has led to a lot of stress for all involved.

However, this week he's been grabbing headlines for a far less serious reason. Williams spotted an Instagram post where Justin Bieber said getting a ridiculous amount of likes (20 million to be precise) would persuade him to make a Christmas album. Williams, who had already announced the album, put a very aesthetically similar post up but with a far smaller figure attached.

Well, suffice to say, he got more than 20 and the album was already in the bag anyway. Move over Andy, there's a new Christmas Williams in town.