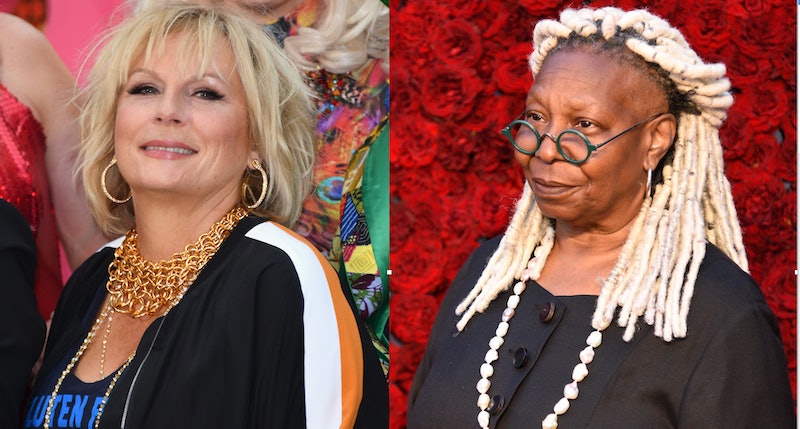 London's West End is a legendary destination for theatre-goers across the globe. And for actors and performers, treading the boards on its hallowed stages is pretty lit. Not only are icons made but sometimes ready-made icons grace us with their presence. Like Whoopi Goldberg and Jennifer Saunders, who'll be starring in Sister Act The Musical. So think fast because finding out how to get tickets for Sister Act The Musical is a matter of urgency. They are selling fast.

Yes, this is happening and guys, like I said, you need to act (or should I say Sister Act) fast. The Show runs from July 29 to Aug 30, 2020, according to the Guardian. And, as they have already been on sale for a wee while, there are only a limited amount of tickets left. And TBH they are the top end of the price bracket so you might need to break into your piggy bank for this one.

The show, which is obviously hotly anticipated, is based on the two films of the same name and it has been confirmed that Goldberg absolutely will be reprising her role as the one and only Deloris. As Goldberg says in the promo for the show:"Yes, the original Deloris is back. A little older, a little seasoned, but really still kind of out there."

Saunders will be playing the Mother Superior role and guys if the cast isn't enough to write home about — you're going to flip out over the production team.

Love singing along to super catchy musical tunes? Well how about Disney? I'll bet you know several Disney films' music scores verbatim. And the original score for the Sister Act musical was written by Alan Menken who has not only won eight flipping Oscars (OMG) but wrote the music for Disney classics Aladdin, The Little Mermaid, and Beauty & The Beast, as well as countless hit Broadway and West End shows including Little Shop Of Horrors and Hercules.

Despite huge excitement and celebration over the show, The Guardian reports that fans have expressed disappointment over the high cost of tickets, which range from £29 up to £249, however as previously mentioned most of the lower-cost tickets have already sold out. Fingers crossed, you've got enough spare cash to grab one. If not, you might have to make do with rewatching the movies instead.

More like this
How To Buy Tickets For Beyoncé’s UK Renaissance Tour Dates
By Shahed Ezaydi
Rita Ora Finally Opened Up About Marrying Taika Waititi & Their "Perfect" Wedding
By Sophie McEvoy and Catharina Cheung
You’ll Definitely Recognise Isadóra Bjarkardóttir Barney’s Mum
By Maxine Harrison
Here’s How You Can Watch The Grammys 2023 In The UK
By Emma Madden and Catharina Cheung
Get The Very Best Of Bustle/UK
Sign up for Bustle UK's twice-weekly newsletter, featuring the latest must-watch TV, moving personal stories, and expert advice on the hottest viral buys.