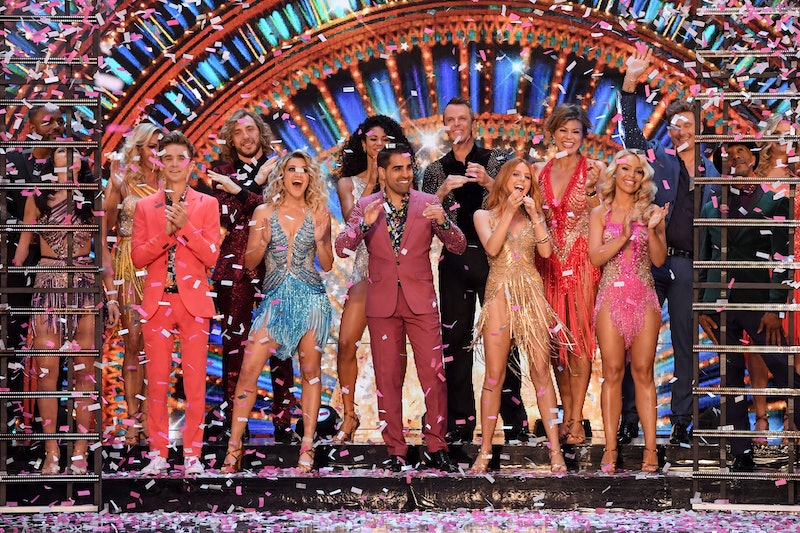 Strictly Come Dancing is fully underway. We've had dramas (I'm looking at you, Seann Welsh and Danny John-Jules), the epic Halloween week, and some awesome dancing. But what all Strictly fans look forward to every year (as do the contestants) is Blackpool week. The celebs and their professional dancing partners descend on the huge Blackpool Tower Ballroom for a massive audience, and it's always super special. Unfortunately, live tickets for this year's Blackpool show (which airs on Saturday) have all sold out. But if you're wondering how to get tickets for Strictly's 2019 Blackpool week, I've got you covered. Here's how to make sure you get a jump on things in preparation for next year.

The interesting thing about getting tickets for the special Strictly Blackpool show is that you can't actually buy them. Instead, you enter a draw by the BBC, which allocates tickets with an online random draw system. The draw (which you can access via the BBC's website) allows you to apply for different dates throughout the series, including Blackpool. You can apply for one pair of tickets per show.

This year's draw closed at 4 p.m. on Wednesday 29 August 2018, meaning you had to get in there extremely quickly, before the show even started in September. So my best advice would be to keep your eye on things when the 2019 series is nearing, perhaps around July or August, in order to be in with a chance of getting Blackpool entry tickets. You can sign up to the BBC Mailing List to make sure you never miss an update. There is no other way to apply for or buy tickets, so this really is your only option.

The Blackpool week is always a pivotal moment for every Strictly contestant. Being voted out at the huge ballroom is a gutting blow for any celebrity, and the choreography, costumes, and makeup are always bigger than ever. Speaking to Hello!, former pro dancer Brendan Cole revealed in his column why Blackpool week is so important for everyone on the show:

"Blackpool week is always a milestone for the couples. It's an incredible show to be a part of with a big crowd, a lot of fuss and and it's also a chance for a jolly up north."

He also claimed that the celebrities who make it to Blackpool are even paid a little more. "There's also a little added incentive for the celebs of a small bonus in their pay packet," he explained.

This year, the stars who have made it to Blackpool are as follows:

Last week saw actor Danny John-Jules and his partner Amy Dowden exit the show after losing in the dance off. Professional Dowden later appeared on the after show It Takes Two alone after controversy had surrounded her partnership with Danny. Here's hoping the remainder of the season passes without further incident.

More like this
'Survivor' Is Finally Coming Back To UK Screens
By El Hunt
Jason Derulo Is Launching A New Singing Show In The UK
By Maxine Harrison
'I'm A Celebrity' Just Made A *Major* Announcement
By Sam Ramsden
After The Bling Ring, Nick Prugo Was Embroiled In Another Scandal
By Arya Roshanian
Get The Very Best Of Bustle/UK