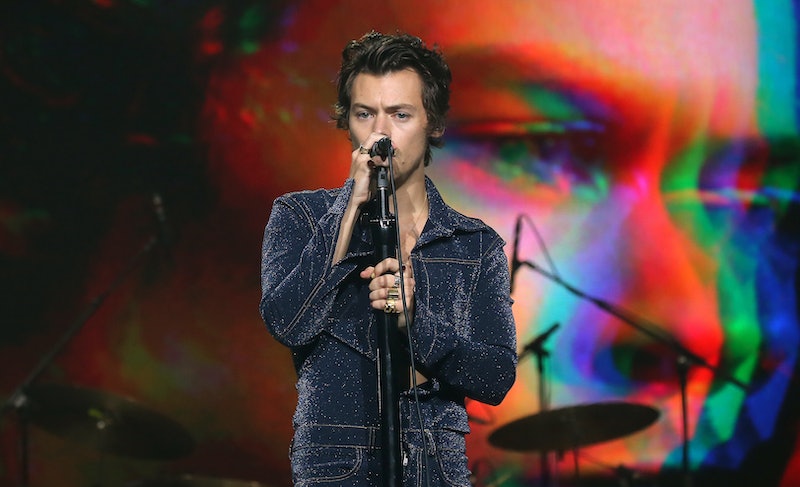 Unless you've been living under a rock you'll know that ex One Direction-er Harry Styles has released his highly anticipated second album Fine Line and it is full of absolute anthems. He has come a long way since his pop boy band days with his music taking a more indie vibe. The star recently announced a 2020 tour, and those tickets, I'm sure, will be very hard get hold of. But lucky for us, he will also be doing another, smaller show very soon and here's how to get tickets to Harry Style's secret show in London.

Styles announced that he was throwing an intimate show to celebrate the release of his album which came out on Dec. 13, 2019. Dazed reports that this will be the first time that Styles has headlined a show since his two sold-out shows at the O2.

Although we know the show is, in the singer's words, "tiny," and that it'll take place on Dec. 19, 2019, we don't know much more than that I'm afraid. There has been no word on the exact time or location of the show.

If you're wanting to get your hands on tickets to have the opportunity of seeing Harry Styles up close and personal, the singer's website explains that you have to buy a copy of the album directly from the site before 3 p.m. on Dec. 17 for access to a code. Once you've received your unique code, tickets will then go on sale on Dec. 18 at 12 p.m. Fingers crossed. Let's clear our diaries just in case.

This isn't the first time Styles has arranged a secret, intimate show. Following the release of his self-titled album he performed a secret show for 600 people at The Garage in Highbury, according to BBC Newsbeat and tickets were just £10. No doubt this time round, Styles will be performing a collection of her newest songs, including Adore You and Lights Up.

More like this
Harry Styles Just Split His Pants In Jennifer Aniston’s Face
By Sam Ramsden
Lewis Capaldi Is “Really Sorry” After Pre-Sale Ticket Fiasco Guts Fans
By El Hunt
Watch The Sweet Moment Adele Stopped Her Vegas Concert To Kiss Her Son
By Sophie McEvoy
This 'Emily In Paris' x Blackpink Crossover Is Beyond Iconic
By El Hunt
Get The Very Best Of Bustle/UK
Sign up for Bustle UK's twice-weekly newsletter, featuring the latest must-watch TV, moving personal stories, and expert advice on the hottest viral buys.