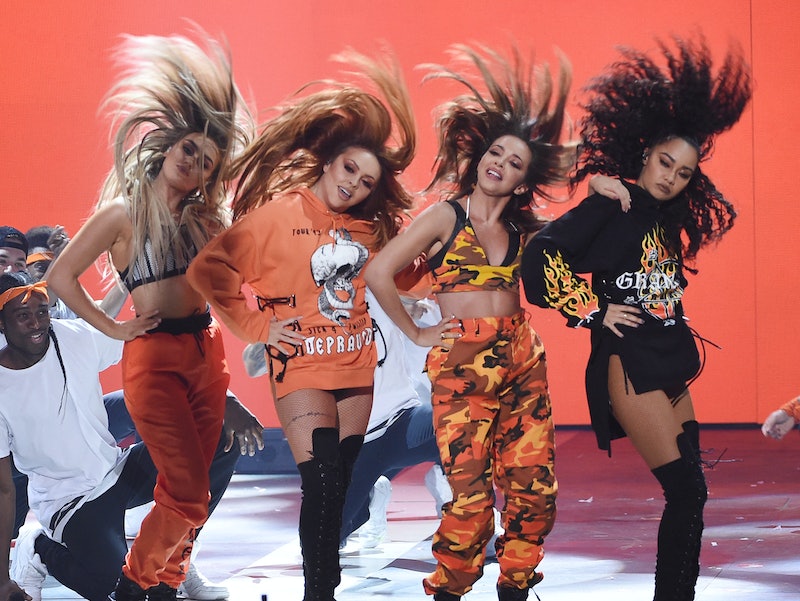 Put on your wings, throw some black magic in there, and salute because Little Mix are heading back on tour in 2019 and they're set to take the UK by storm. The girl group may have only finished touring a few months back, but next year's dates are more than likely going to sell out fast. So, here's how to get tickets for Little Mix's LM5 UK tour.

The girl group will be performing across the UK in support of their fifth studio album, aptly named LM5. The dates span October and November 2019, and will cover pretty much the whole of the UK and Ireland.

Kicking off at the 3Arena in Dublin on Oct. 10, the group will move through Ireland to Scotland, then to Liverpool before they touring their down the country from Oct. 25 until the Nov. 19, including three nights at London's O2 arena.

And don't fret if you're an international fan — the group have hinted on their site that they've "got something coming for you too," so keep your eyes peeled.

Tickets will be available on Ticketmaster at 9 a.m. on Friday, Oct. 26. If you wanna get in there early, there is going to be a presale on Wednesday, Oct. 24 but you can only access this through pre-ordering the LM5 album. To do this, you need to head on over to the official Little Mix store, enter a few details and you'll receive an email with a code for the presale, which begins at 9 a.m. on Wednesday, Oct. 24.

You have until 3 p.m. on Tuesday, Oct. 23 to sign up, and you should receive a pre-sale code by 5 p.m. on Tuesday. As the site notes, these codes will not guarantee you tickets to your chosen date, they just boost your chances of moving up the queue quickly.

And if you're feeling really fancy, there will be the opportunity to nab VIP packages as well.

Lead single 'Woman Like Me' was released on Oct. 12, and has earned critical acclaim thanks to the girl power-themed lyrics and its fierce feature from Nicki Minaj. The track was originally written by singer Jess Glynne with Ed Sheeran for her latest album Always In Between, but she ultimately decided to give the track to the girl group instead.

Last year was pretty significant for the group, as their track "Reggaetón Lento" went platinum. Little Mix now have eight platinum singles, which puts them on the same league as the legendary Spice Girls, according to Digital Spy.

I mean, if that's not a reason to see Little Mix next year, I don't know what is.