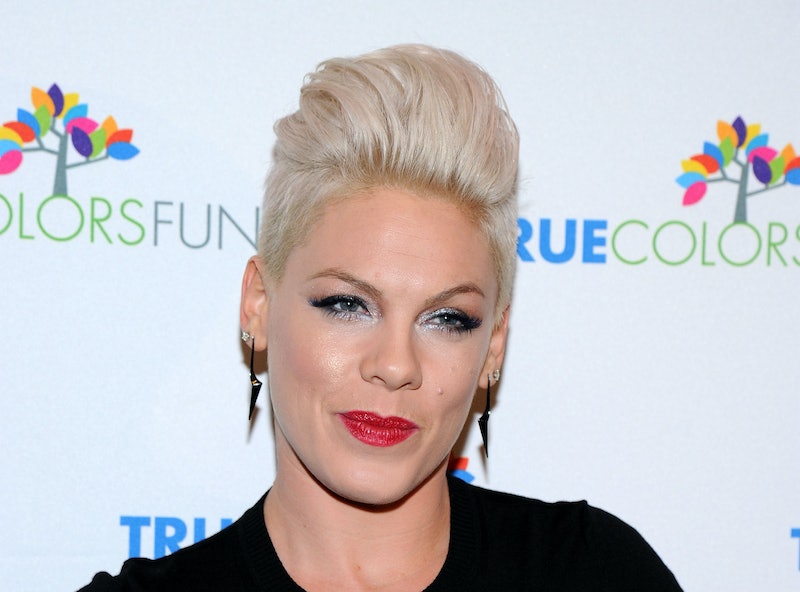 Fans of Grammy Award-winning artist Pink received some very exciting news this week when the hit-maker announced she would be embarking on a world tour in 2019. The Beautiful Trauma World Tour will be taking place in North America and Europe, and will stop by England, Wales, Scotland and Ireland during the European leg. With a high demand for tickets expected, you'll want to know exactly where to get your hands on them, and here's how to get tickets to Pink's Beautiful Trauma UK tour.

Tickets for the UK shows will be available on Ticketmaster at 10am on Tuesday 23 October. There will also be presale tickets up for grabs, with a number of ways to purchase these through the Ticketmaster website. Fans have until 11.59pm on Thursday 18 October to sign up to the Verified Fan presale, applicants will then be entered into a ballot and those who are successful will receive a text message before the presale tickets become available at 10am on Sunday 20 October. However, the lucky fans who win access to the Verified Fan presale tickets will have until 9am on Tuesday 23 October to make their purchases.

American Express Cardmembers will be able to nab their presale tickets as early as 10am on Wednesday 17 October, and will have until 10pm Sunday 21 October to purchase their chosen tickets.

Although no information has been announced on how to access the tickets as of yet, there will be a Ticketmaster presale which is due to begin on Monday 22 October at 10am, and run until 9am on Tuesday 23 October. The UK leg of the tour will see Pink take to the stage at the Principality Stadium in Cardiff, the Anfield Stadium in Liverpool, the Hampden Park Stadium in Glasgow and Wembley Stadium in London. The full list of dates can be found on the official Beautiful Trauma World Tour website.

The tour will be the first time Pink has performed in the UK since her critically-acclaimed headline set at the 2017 V Festival, and the first time the "What About Us" singer has toured the UK since 2013. If fan reactions of the upcoming shows on social media are anything to go by, the 39 year-old can look forward to a warm welcome when she arrives in the UK next year.

Pink's hugely successful career, which began in 2000 after the release of her debut album Can't Take Me Home, was celebrated during the 2017 MTV Video Music Awards when she was awarded with the prestigious Michael Jackson Video Vanguard Award. During her inspiring speech the singer discussed the importance of self-acceptance and how distressed she felt after learning that her six year-old daughter, Willow, had been suffering with confidence after being told she looked like "a boy with long hair".

With an empowering message for her millions of fans, as well as an impressive catalogue of hits, this tour certainly sounds like something not to be missed and I can't wait to get my hands on some tickets.