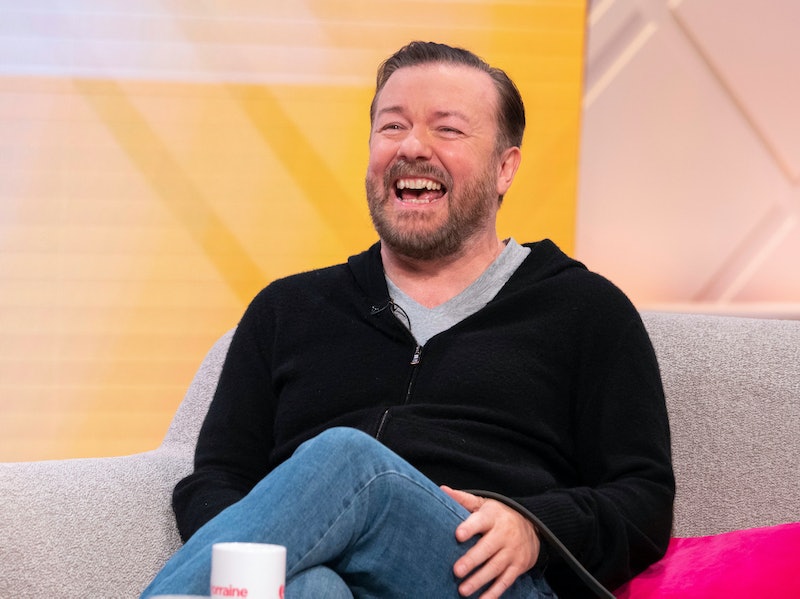 One of the comedy world's most controversial figures is returning to the scene with a brand new tour. Yes, Ricky Gervais is back with another addition to his catalogue of stand-up tours, and once again, fans of The Office creator can look forward to a string of upcoming UK dates. So, if you can't wait to see the comedian in the flesh, here's how to get tickets to Ricky Gervais' SuperNature tour in the UK.

Unfortunately, details of SuperNature's expected UK dates are yet to be announced, however, do not despair, as Gervais himself recently confirmed on social media that a lot more dates are set to be announced during his upcoming appearance on BBC One's The Graham Norton Show — and just to be sure, I have reached out to the comedian's representatives for comment, and will update with any new information the minute it becomes available.

According to Ticketmaster, the After Life star is also due to take his next comedic venture across the pond in the Spring of 2020, where he'll perform a string of shows in U.S. cities such as Chicago, New York, and Los Angeles. But before that, Gervais will complete his recent SuperNature European-leg, which is set to continue in Paris on Sunday, November 24, and conclude in the German capital of Berlin on Sunday, December 8. According to the Daily Mail, the short-run of European gigs first kicked off in Madrid and Prague, and to test the waters with his newest material, the comedian also recently carried out a series of warm-up shows across the city of London.

Speaking on social media, Gervais promised that his upcoming stand-up spectacular will explore "the absurdity of superstition, magic and all unsubstantiated beliefs," whilst celebrating the "conclusion that Nature is already Super enough." And if news surrounding the SuperNature tour wasn't exciting enough, the Derek star will also be returning to host next year's Golden Globe Awards for a fifth and final time. As the Guardian reports, the comedian will host the 77th edition of the U.S. awards show, despite previously stating he wouldn't return to the Golden Globes stage. In a statement, the returning host revealed that the Hollywood Foreign Press Association had made him an offer he "can't refuse," before adding "but this is the very last time I’m doing this, which could make for a fun evening."

Well, I don't about you, but I'm really looking forward to Gervais' next body of work, and if you're hoping to find out more, you can catch the comedian on The Graham Norton Show, which is set to air on Friday, November 22 on BBC One.