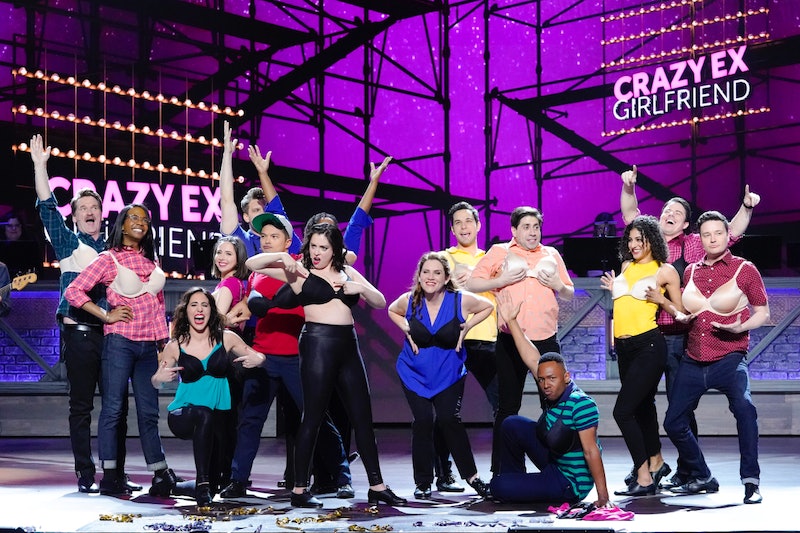 Crazy Ex-Girlfriend may be ending on Friday, but there's still a way to get your Rebecca Bunch fix: you can buy tickets to the Crazy Ex-Girlfriend live show. In 2018, the cast went on tour with Crazy Ex-Girlfriend Live, but unfortunately, the 2019 iteration will be a little more short-lived. It will run for two nights at Radio City Music Hall in New York City on Tuesday, May 14 and Wednesday, May 15. And while tickets are still available, the Santa Ana Winds have closed the window on some of the best options. But if the concert special and the series finale have you feeling desperate for more Crazy Ex, let Rebecca's tenacity inspire you to grab some of the remaining tickets.

Neither show is sold out, but the March 14 date is far more limited. For either date, you can purchase tickets for Crazy Ex-Girlfriend Live on sites like Ticketmaster and StubHub. For the May 14 shows, the prices currently range on Ticketmaster from approximately $55 to $331, with most of the options being verified resale tickets. The May 15 show has much more availability, as well as more options for people on a tighter budget. Ticket prices for that date range from $39.50 to $195.50.

However, all of this will be for naught if you can't make it to New York City on a weekday night. So in that way, it's not as easy to get to as last year's live tour, which came to Portland, Seattle, Chicago, Boston, Washington D.C., Philadelphia, New York, Los Angeles, and even the Covina Center for the Performing Arts — just a few miles from the real-life setting of the show, West Covina. But if you want to see Bloom and company sing in character one last time, you can pull a Rebecca and fly across the country to see Crazy Ex-Girlfriend Live.

A full cast list for the Radio City Music Hall shows hasn't been revealed. But most of the cast performed on the live tour and all of them appeared in the concert special, which, per The Hollywood Reporter, was filmed on March 15 and 16 at Los Angeles' Orpheum Theater. That means you will probably see West Covina's finest, like Donna Lynne Champlin (Paula), Vince Rodriguez III (Josh Chan), Pete Gardner (Darryl), Vella Lovell (Heather), Gabrielle Ruiz (Valencia), David Hull (White Josh), Scott Michael Foster (Nathaniel), and Skylar Astin (Season 4's replacement Greg for Santino Fontana), plus many other recurring characters.

Considering ticket demand will probably skyrocket again following the series finale and concert special on April 5, you'll want to purchase tickets while you can. And if getting to the Big Apple in a month just isn't in the cards for you — well, Bloom and showrunner Aline Brosh McKenna discussed the future possibility of a Crazy Ex-Girlfriend stage musical at PaleyFest in March. And if not, well, Crazy Ex-Girlfriend has a whole catalog of songs you can revisit at any time.