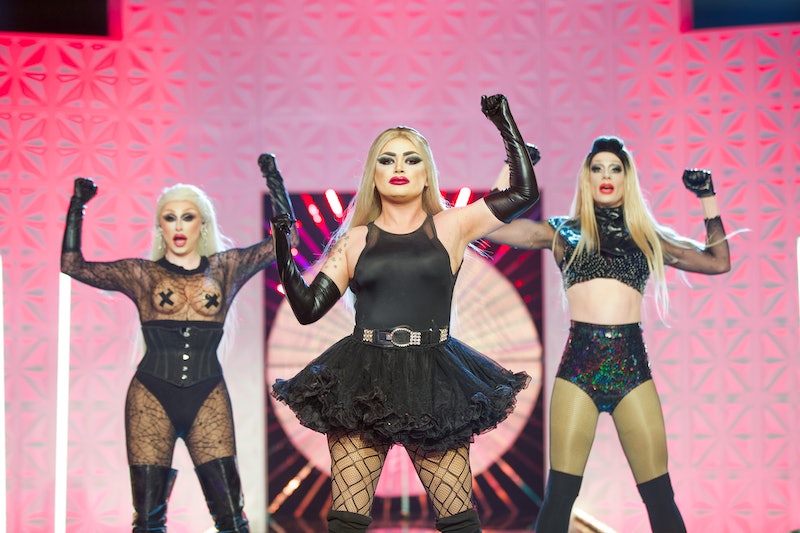 Since its arrival on BBC Three, the first ever series of RuPaul's Drag Race UK has gone on to mirror the success of its U.S. counterpart, with a string of high-profile celebrity cameos, impressive viewing figures, and even a UK top 40 single. So, news that the cast of Drag Race UK would soon be embarking on an official tour will be welcomed with open arms by fans of the reality-competition series — and if you're already on the hunt for tickets, look no further, because heres how to get tickets to the RuPaul's Drag Race UK tour.

Fans of the groundbreaking series are in luck, because tickets are now available to purchase, and you can find a date and location that suits you on the tour's official website. According to Voss Events, the RuPaul's Drag Race UK spectacular is set to take place throughout the months of November and December, so start your engines, because fans don't have long to nab themselves some tickets. The string of shows will kick off on Thursday, Nov. 28 in Newcastle, and will then move on to cities including London, Birmingham, Brighton, and Glasgow — before wrapping up in Manchester on Saturday, Dec. 7.

Tickets for the RuPaul's Drag Race UK Season 1 Tour are currently available to purchase via the Voss Events website.

A description of the upcoming tour promises to bring "the most sickening talent contest in the world" to a city near you, and give fans the chance to witness "all of the charisma, uniqueness, nerve and talent" of our UK queens live. The tour will be hosted by RuPaul's Drag Race legend, Alyssa Edwards, who previously appeared on two seasons of the U.S. version of the show.

As Attitude reports, the current batch of UK queens recently made Drag Race herstory after scoring UK Top 10 hit. Yes, fan-favourites Baga Chipz, Divina de Campo and Blu Hydrangea — better known as The Frock Destroyers — performed their way to victory in the show's recent girlband-themed challenge, and their MNEK-produced track "Break Up (Bye Bye)" entered The Official Big Top 40 chart at number 10. The fabulous trio are also set to debut in the Top 20 of the Official UK Singles Chart, which means the Drag Race stars could be looking forward to yet more chart success. Fingers crossed.

And if all that excitement wasn't enough to satisfy your Drag Race UK obsession, you've lucked out, because a second outing of the BBC Three series has now been confirmed. As the BBC reports, Mother Ru appeared to be just as excited as fans upon hearing the news, and in a statement, the Drag Race head judge thanked viewers "for their overwhelming support," before adding that he can't wait see more of what the British drag scene has to offer.