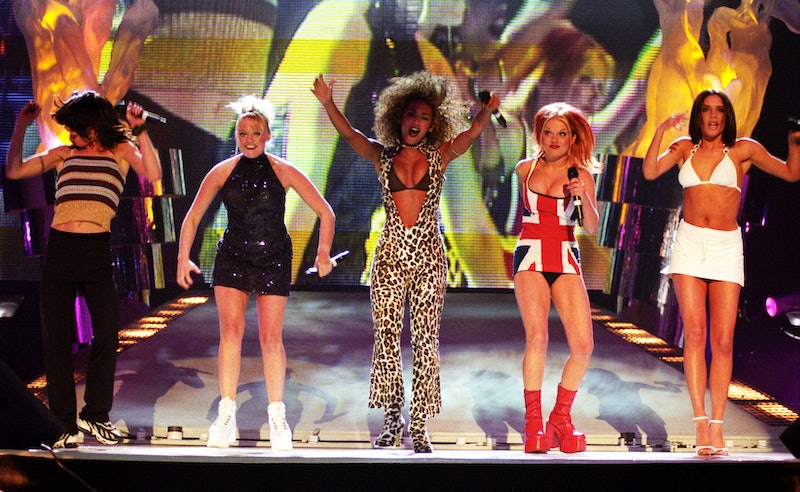 One of the most iconic girlbands of all time, the Spice Girls, have been hinting at a comeback for quite a while now. And later today, fans of all things girl power will reportedly have their prayers answered as the group are set to announce their first tour in ten years. According to Dan Wootton of The Sun, the girls are rumoured to be announcing the new tour in a secretly filmed mock news bulletin. If you're wondering how to get tickets to the Spice Girls reunion tour, here's what we know so far.

Update: The Spice Girls, sans Victoria Beckham, revealed via Twitter at 3pm on Monday 5 November that tickets would go on sale at 10:30 on Saturday 10 November. Tickets are available via the Ticketmaster website, and the tour comprises the following dates:

Earlier: According to The Sun, tickets for the summer 2019 tour will go on sale this weekend. On her morning radio show, in response to the portrait of the new foursome revealed by The Sun, Emma Bunton added that she was "excited," and that all will be revealed at 3 p.m. today. This Ticketmaster link appears to be a holding page for the Spice Girls, so bookmark this and check in again around 3 p.m. Bustle have reached out to the Spice Girl's rep for clarification, and will update this post with details when they are made available.

So what else has been reported about the tour? When discussing the upcoming comeback tour, one source told The Sun "Girl power is back", and continued "This is the biggest music comeback of the decade and tickets are expected to sell like hot cakes when they go on sale at the weekend" — so if you're looking to get your hands on some tickets, you might need to act fast.

Although news of the tour will certainly send fans of the girlband into a frenzy, some might be disappointed to learn that Posh Spice (also known as Victoria Beckham) will reportedly not be taking part in the reunion tour. According to The Sun, the former-member has opted out of taking part in order to focus on her fashion business. But fear not, because although Beckham will indeed be missed, the stadium extravaganza will be headlined by all four remaining girls.

As previously reported, this will be the first time the British pop sensations have hit the road together in a decade, having previously embarked on The Return of the Spice Girls world tour in support of their greatest hits album back in 2008. The band have indeed taken the stage together during that time, most recently at the London 2012 Olympics Closing Ceremony, where the legendary group performed the staple hits Wannabe and Spice Up Your Life.

Geri Horner, Melanie Chisholm, Emma Bunton, and Melanie Brown have collectively sold a whopping 85 million records worldwide, and have an equally impressive catalogue of hits which are sure to be featured within the new stadium tour. The band will also be setting up brand new official social media accounts upon the announcement of the reunion tour, meaning fans can keep up to date with all the latest information surrounding the highly anticipated comeback, the Mirror reports. And, according to the newspaper, Spice Girls fans are in for a treat this weekend as the girl group are set to make their first television appearance in support of the new tour on ITV's The Jonathan Ross Show.

Last week, bandmate Scary Spice (Mel B) took to Instagram in what appeared to be one last plea for fellow Spice Girl Beckham to take part in the reunion tour. Whilst wearing a mask of Beckham's face, the 43 year-old carried an axe which had a carefully written message on the side. It read: "No I am not going on tour", which seemingly poked fun at Posh Spice's decision to not take part.

Although Beckham is not expected to change her mind anytime soon, the hype surrounding these monumental comeback shows appears to be growing by the day. And with news of a Spice Girls performance being so rare nowadays, you really don't want to miss out on this sure to be spectacular UK tour.