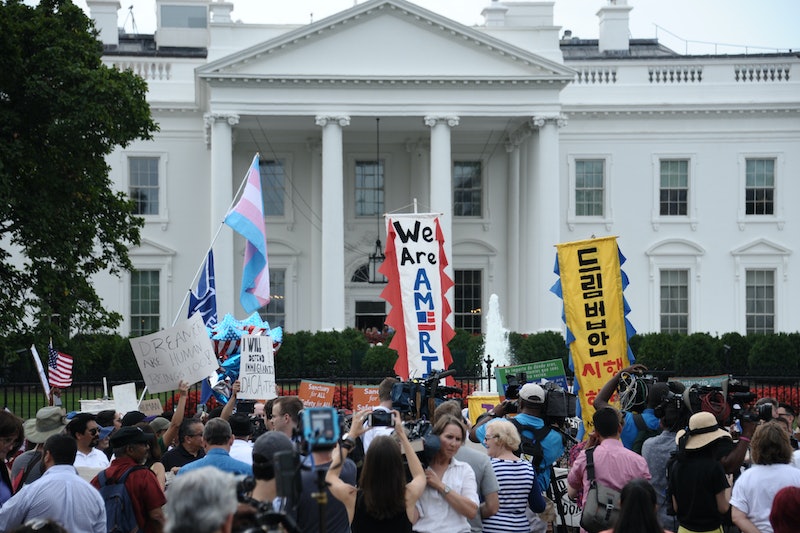 On Tuesday, Attorney General Jeff Sessions announced that the administration plans on ending the Deferred Action for Childhood Arrivals (DACA) program, leaving 800,000 recipients' lives in limbo. Trump's decision is a sweeping one that leaves these young undocumented immigrants — often nicknamed Dreamers — and their place in American society in doubt. If you're concerned about their plight, here's how you can help DACA recipients.

The Obama-era policy allowed undocumented immigrants who were brought to the United States as children to be guaranteed a reprieve from deportation and the ability to work legally. The biggest threat Dreamers would face is the potential for deportation once their DACA permits run out (they last two years, and the Trump administration's plan will begin preventing renewals soon).

The only way Dreamers will legally be able to stay in the country once their DACA permits expire will be if in some way the law changes. Obama, who has labeled Trump's decision "cruel," called on Congress members to "protect these young people." The best way to help Dreamers is to push for some change in that law.

In announcing an end to DACA, the Trump administration has expressed its desire for Congress to come up with a legislative solution (though it was less clear on what kind of solution the administration wants). And that remains the place where there is the most potential for direct help to Dreamers affected by the president's decision.

Members of Congress from both sides of the aisle have expressed support for finding a legislative solution to DACA, and passing something through Congress that would preserve the ability of Dreamers to stay in the United States and work while they're here. Any bill would have a difficult time making it through Congress — the DREAM Act, which gives Dreamers their name, was first proposed in 2001, and though it has been up for a vote numerous times, it has never managed to pass through Congress.

But with even many Republicans saying that Congress needs to find a solution for the crisis created for Dreamers, advocates are kicking into high gear to try and make this the time when Congress is finally able to pass something to permanently solve their predicament.

Indivisible, a network of local organizers who push members of Congress to support progressive policy, is encouraging activists to call their members of Congress and tell them to support a bill that would help the Dreamers. They are providing fact sheets and scripts for activists. And beyond just calls, they are encouraging local groups to organize their own protests, marches, and other events calling for action.

Indivisible joins groups like United We Dream (which advocates directly for Dreamers), MoveOn.org, and America's Voice in organizing these protests and other actions to pressure Congress. With the legal status of these immigrants continuing to be their greatest threat from the Trump administration's actions, pressuring Congress is their biggest focus.

Beyond congressional action, there are numerous other organizations that are fighting for the legal rights of the Dreamers and of other immigrants. You can find a list of immigration advocacy organization's worth donating to here. Among them is the National Immigration Law Center, which has announced its intention to sue the federal government on behalf of Dreamers.

The fight ahead for Dreamers will be a hard one. DACA recipients cannot themselves vote, and until the leaders of the government change their tune on immigration, they will not be able to. If you want to fight for them, there is no better way to do so than to try to push the government to change how it treats them.

More like this
Buckingham Palace Aide Resigns Over “Unacceptable” Comments To A Black Guest
By Shahed Ezaydi
Joe Lycett Just Took HIs David Beckham Qatar Protest To A Whole New Level
By Sophie McEvoy
Iran Has Issued A Death Sentence Over Mahsa Amini Protests
By Catharina Cheung, Darshita Goyal and Maxine Harrison
Ayurvedic Principles & Family Are At The Root Of Fable & Mane
By Justine Knight
Get Even More From Bustle — Sign Up For The Newsletter