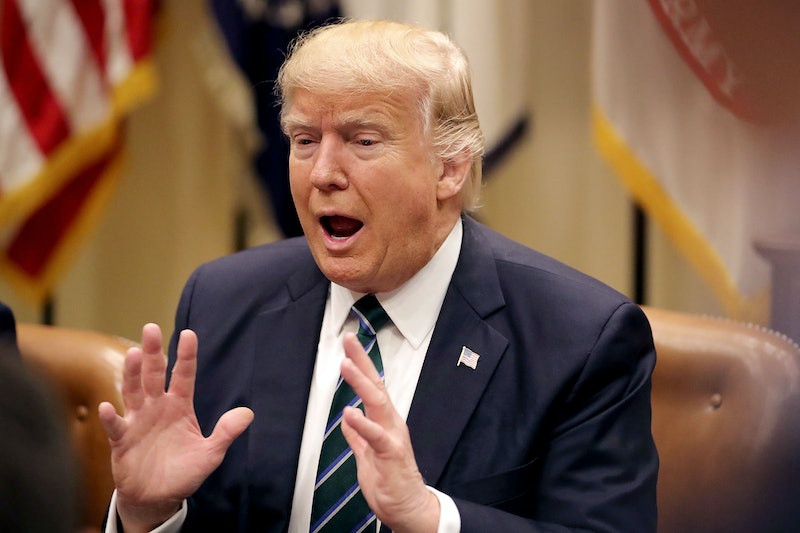 Maya Angelou once said, "When people show you who they are, believe them the first time" — and this statement has never been more relevant. Every voter who took President Trump seriously, but not literally, is in for a rude awakening, because Trump's proposed budget cuts are horrifying. Here's how you can help organizations that Trump's budget plan will hurt, including the National Endowment for the Arts, the Environmental Protection Agency, programs like Meals on Wheels, after school meal programs, and school lunch programs that sustain the basic survival of millions of Americans.

The irony is not lost on me that this budget will do the most damage to many of the people who put Trump in office in the hope he would make good on his promise to create jobs. Instead, he's literally pulling the rug out from under them. Many children in underserved communities get their only hot meal of the day at school through federally funded school programs. Clearly the Trump administration doesn't think these kids matter.

White House Director of the Office of Management and Budget Mick Mulvaney recently stated that there is "no evidence that after-school programs to help kids get fed improves performance." Mulvaney cited the programs as a burden on taxpayers that should be eliminated — despite the fact that a report from Centers for Disease Control and Prevention (CDC) reports that hunger takes a toll on student achievement, and alleviating it helps students succeed better at school.

The report notes that hunger due to insufficient food is associated with lower grades, higher rates of absenteeism, repeating a grade, and an inability to focus among students. Think back to the last time you were too hungry to think about anything else. Now think how you would manage if you felt that way every day, all day long. For 3 million American households, constant hunger is a regular part of life.

Also on the chopping block is Meals on Wheels, a program that delivers hot meals to more than 2.4 million housebound people older than 60. More than 500,000 of these recipients are veterans, according to news site Bloomberg.

NPR called the budget cuts a "kick in the shins" for low-income Americans. As if taking food away from our most vulnerable citizens is not bad enough, Trump's budget proposal also eliminates funding for the NEA, and cuts the EPA's budget by 31 percent, because who needs art and clean air? It seems like the administration is hoping that people will be so hungry they won't even notice the slow collapse of society under Trump.

What is getting funding? Trump's plan calls for significant increases in military and border-security spending, like that ridiculous proposed wall between the U.S. and Mexico.

Pissed off yet? Here's how you can help.

Meals on Wheels programs receive Community Development Block Grants to fund programs at the local level. Find the Meals On Wheels program in your community, and donate if you can. Additionally, write to your representatives to voice your support for the program. You can cite facts in your letter from information provided on the Meals on Wheels fact sheet, including the fact that one in six senior citizens suffer from hunger, and providing Meals on Wheels for one person for one year costs the same as spending one day in the hospital.

This program, currently funded by the U.S. Department of Agriculture Food and Nutrition Service provides kids and teens with the nutrition they need, and offers them constructive activities, according to the USDA website. Without this support millions of children will go hungry, and are at an increased risk being drawn into activities that could adversely affect their futures. Write to your representatives and cite information from the USDA fact sheet.

Let's get this straight: Climate change is real. This makes Trump's proposed EPA cuts all the more disturbing. "The U.S. EPA is already on a starvation diet, with a bare-bones budget and staffing level. The administration's proposed budget will be akin to taking away the Agency's bread and water," John O'Grady, head of the union that represents EPA employees, told CNN. "How can this administration tell America that we will have clean air and clean water with a 25 percent reduction in U.S. EPA's budget?"

If you value clean air and water, here are organizations you can support.

Environmental Defense Fund: Founded in 1967, this group was instrumental in getting the EPA to ban DDT in 1972. They focus on combating climate change and overfishing, and advocate for sustainable farming and ranching practices.

Sierra Club Foundation: The financial support arm of the Sierra Club promotes protections for public land, advocates for the United States to transition to a clean-energy economy (especially with its Beyond Coal and Environmental Law programs), and expands access to the outdoors across cultural and economic lines.

Natural Resources Defense Council: This group supports environmental programs that work to to ensure the rights of all people to the air, the water, and the wild.

Additionally, write to your representatives and ask them to support the EPA.

You can support the NEA by calling or writing to your representatives. Let them know that 40 percent of NEA-supported activities take place in high-poverty neighborhoods; 36 percent of NEA grants go to organizations that reach underserved populations such as people with disabilities, institutions, and veterans; and 33 percent of NEA grants serve low-income audiences. In you want to do more, find local nonprofit arts organizations in your city, and donate your time and money to help them thrive.

Now for the most upsetting news of all: According to an article in the Independent, figures show that services facing elimination under Trump's proposed budget cuts could be maintained at the cost of his visits to his private Florida resort over four years. You know, that one that he's spent so many of his weekends at since taking office.

It's hard to believe that so much damage can occur just three months into Trump's presidency. This is why it's more important than ever to make your voice heard, because it's going to be a long four years.