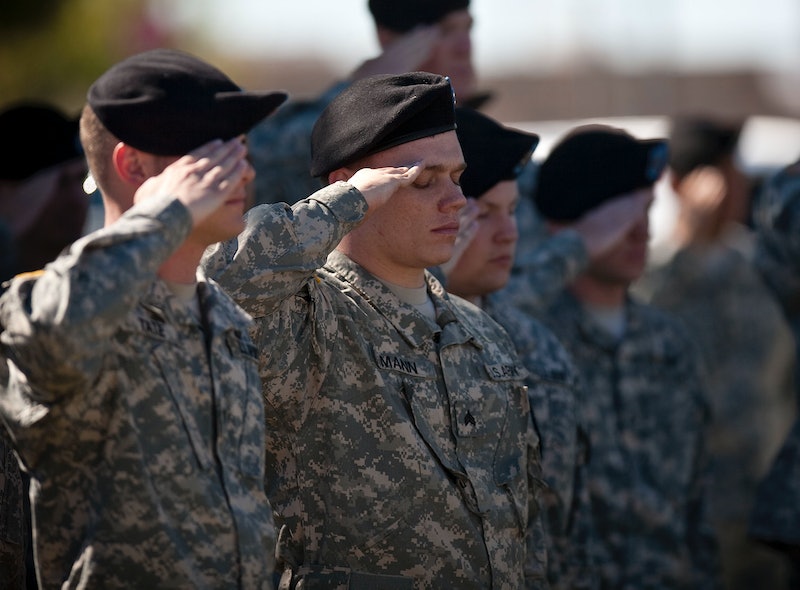 On Wednesday, President Trump tweeted that transgender people would not be allowed to serve in the military. According to estimates, roughly 15,000 transgender people are currently enlisted in the various branches of the military. Hundreds have been serving openly since Obama announced his intention to allow trans individuals to serve their country with the same rights as non-trans individuals.

Therefore, the population of transgender individuals in the military boils down to two groups: those who feel safe coming out as transgender, and those who do not. Both of those groups are under threat now more than ever.

The servicemembers who believed that Obama's plan to allow trans people to serve was a done deal have been robbed of certainty about their future. Meanwhile, those who did not feel safe coming out as transgender in the first place have had those feelings validated by the president of the United States.

Given this, here are some ways you can support trans people in the military.

Wherever you are in the United States, you can stand up for trans servicemembers by letting your elected representatives know exactly how important it is to you that trans individuals have the right to serve your country authentically. Here's how to call them.

The ACLU responded swiftly via Twitter to Trump's announcement. "Today is a setback in the march towards justice," it wrote — citing today as the anniversary of President Truman desegregating the military in 1948 — while asking for trans servicemembers (active or otherwise) to get in touch.

The announcement came too suddenly for the ACLU to pre-empt it with a plan, but rest assured that it and other organizations fighting for civil or trans rights will find a way to resist this order, much like the ACLU did with its lawsuit against Trump's travel ban. You can donate to the ACLU here.

Some other transgender-supportive nonprofits you can donate to include the Transgender Law Center, the National Center For Transgender Equality, and the Transgender Legal Defense and Education Fund. You can find a more extensive list here.

Show Your Support Via Social Media

On Facebook, Twitter, Tumblr, LinkedIn, Instagram, and any and all other social networks you're active on, you can and should showcase your support for transgender individuals.

Whether you're letting the transgender people in your life know that you care about and support them, sharing resources, supporting the community, or helping to organize a way to resist, the more vocal you can be, the better.

Help Organize A Protest Near You

Again, wherever you are in the United States, you have the right to make your voice heard by organizing or participating in a public protest. Doing so not only makes clear to the transgender and non-cis population that you support them, but shows Trump that the resistance to his non-inclusive policies isn't going anyway.

Remind The Trans Individuals In Your Life You Support Them

It's difficult to imagine what it must be like to exist as a transgender person in America at this time. Told for years that your existence was somehow wrong — and even banned from serving your country, even with your life, if you reveal your true identity — the final two years under the Obama administration finally saw a little bit of progress. Obamacare included significant transgender protections, the administration announced that trans servicemembers could serve openly, and the administration put in place a number of necessary protections for the community.

Now, with the Trump era in full force, transgender protections put in place under Obamacare have been rolled back. Not only are transgender individuals more at risk than ever, the community has now been told that they cannot serve their country, lest they be a "disruption."

Transgender individuals already suffer anxiety and depression at a much higher rate than cis individuals, not to mention the likelihood of suicide and violence at the hands of others. With this latest move by Trump and his administration, they need to know that they have your support.

Make yourself heard. Even if you just reach one person who has been made to feel somehow invalid or unworthy by Trump and his administration, it'll be worth it.