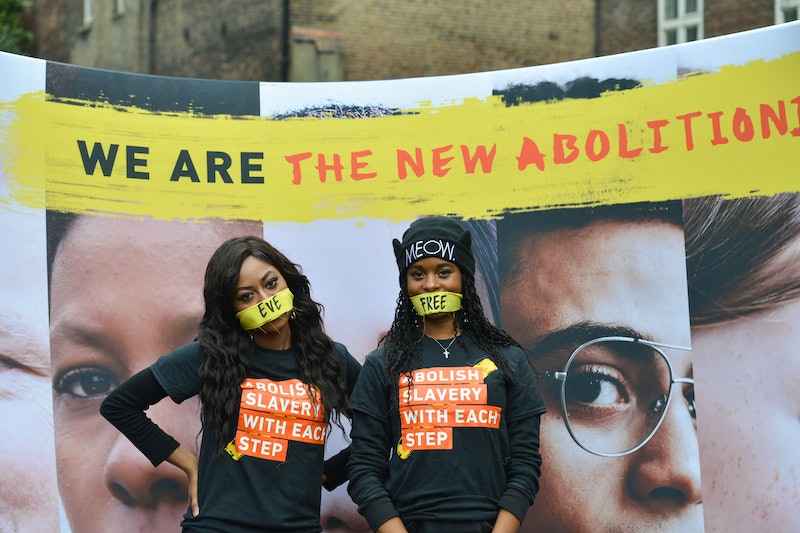 People might think slavery no longer exists or that it only happens in countries far far away. But modern slavery is real and is in fact still a huge problem in the UK, according to several anti-slavery charities. Being aware of the trade is all well and good but there are also lots of things you can do to help victims of modern slavery escape horrendous living and working conditions.

Over the years, the definition of slavery has changed, says Anti-Slavery International. Shackles have become invisible and slave owners now seamlessly blend into society. People are taken from their homes with the promise of a better life and trafficked to another location or country only to find their new existence revolves around working for no pay or being forced into the drug and/or sex trade. Modern-day slaves may not have an owner per se, but they are controlled and exploited all the same.

A new report by The Salvation Army shows the extent of the problem in the UK. Over the past year, the organisation has helped almost 2,000 people. Of them, 1,064 were female and for the fifth year running, the highest number of these women originally came from Albania.

The report also revealed that cases of British nationals being forced into the slave trade have almost doubled in the past 12 months. In 2015/16 and 2016/17, The Salvation Army helped 44 British slaves. This figure has risen to 86 in the year 2017/18. Of those cases, 45 percent were trafficked for labour exploitation, with 42 percent of people experiencing sexual exploitation. Fourteen percent were forced into domestic servitude.

Of course, these numbers are only include people who the organisations are aware of. According to Anti-Slavery International, the government estimates there are tens of thousands of people living as slaves in the UK. Often, they are forced to work in industries including agriculture, car washing, construction, and manufacturing.

Their stories are devastating. In The Salvation Army's report, a 27-year-old woman explains how she and her sister left their home in Vietnam for the promise of work. They were sent to Russia and forced to work long hours in a clothing factory for no pay. There, they were raped by male workers. The woman eventually ended up in prison after being trafficked to the UK where she was forced to live in a house where drugs were being made. After being reported as a victim of modern slavery, she was threatened by her traffickers and forced to return to work as a prostitute. Now, she has been given legal, medical, and emotional support by The Salvation Army and placed in a safe house.

Although many modern slavery victims are given help, they are often forced to wait up to a year for official processing by the government, says charity HESTIA in a report by Sky. Current Home Office guidelines state this procedure should take no longer than 45 days. During this time, they are unable to work and are forced to put their lives on hold until a decision has been reached.

A website has been set up allowing you to help end this lack of support. Free For Good is a campaign encouraging people to email their MP and ask them to support the Modern Slavery (Victim Support) Bill. This bill would guarantee all victims of modern slavery the right to support while authorities are deciding their case and for a further 12 months afterwards.

The Salvation Army is also asking the public to confront businesses who may be using slave labour. The Modern Slavery Act, which was implemented by the government in 2015, made it a legal requirement for big companies to ensure their supply chain was slave-free. Many have since failed to do so. By posting a photo of a product you have bought on social media with the hashtag #askthequestion, you can ask companies whether they have committed to ending modern slavery or whether they have simply ignored the global problem.

Spotting a modern slave can be difficult, but there are guidelines detailing the characteristics to look out for. These include people who display telltale signs of psychological or physical abuse. This could be someone who appears malnourished or beaten or someone who is afraid to talk to strangers or the police.

Other signs include people who are rarely able to travel on their own, people who live and work at the same address, people who seem to have little in the way of personal belongings, and people who are dropped off to work at suspicious times of day.

Fundraising and donating are also options. Organisations such as Anti-Slavery International and The Salvation Army always welcome help — no matter how small it may seem. Modern slavery isn't going to disappear without committed help from authorities and society in general. It's time for all of us to step up and do our bit to make the notion of a "free world" more than just a pipe dream.