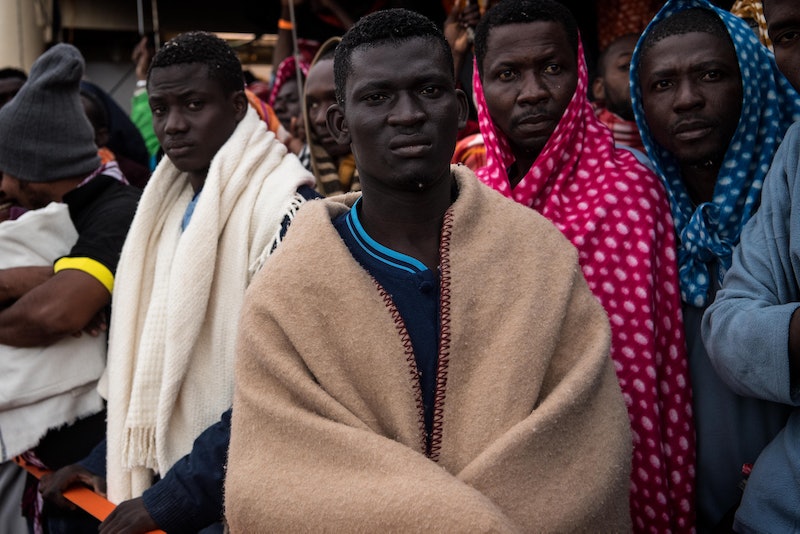 Earlier this month, a CNN investigation revealed that migrant slave auctions are occurring in Libya, as people who are fleeing their home countries are being "auctioned off" by captors for hundreds of dollars. This discovery is incredibly egregious and tragic — and the world must act to help put an immediate end to the practice. Here's how you, too, can help stop the slave trade in Libya (and around the world) by engaging in advocacy campaigns and helping fund development and anti-slavery initiatives.

After receiving video footage of a migrant slave auction, a team from CNN traveled to Libya, where it discovered that slave auctions were taking place in at least nine different locations. The outlet reported that, at these auctions, migrant men from other African countries were being auctioned off for a few hundred dollars.

Libya has a substantial migrant population, as tens of thousands of people fleeing poverty and violence in their home countries cross into Libya every year as they try to immigrate to Europe. But often these migrants never make it there, instead finding themselves "indebted" to smugglers who initially agreed to help them secure passage to Europe, CNN reported. They potentially face slave auctions as smugglers seek to recoup money.

The Libyan slave trade, as well as the global slave trade, are certainly complex issues which will require a worldwide effort to eradicate. However, there are steps you can take to help end slavery in Libya and beyond.

Make Sure The U.N. Focuses Its Efforts On This Issue

First and foremost, you should advocate for the United States and the United Nations to take a strong stance when it comes to investigating, condemning, and ending the Libyan slave trade. On Tuesday, diplomats at a U.N. Security Council meeting (including U.S. Ambassador to the United Nations Nikki Haley) called for an investigation into the Libyan slave trade, as well as a coordinated U.N. response to help combat the problem.

While this initial momentum is promising, it is imperative to continue to put pressure on the U.N. to follow through with an investigation, as well as to develop a comprehensive response to addressing the issue. Consider contacting Ambassador Haley to encourage her to continue to prioritize the slave trade issue within the United Nations system.

The IOM is working in Libya to protect migrants' human rights and to prevent them from being trafficked into servitude by smugglers. The organization is doing so by pushing Libyan authorities to develop alternatives to migrant detention centers (where migrants are often exploited and abused) and demanding that authorities hold those who abuse or enslave migrants accountable for their actions.

Fight The "Root Causes" Of Slavery And Trafficking

You can also help stop the Libyan slave trade by helping fight what U.N. Secretary General António Guterres refers to as the "root causes" of trafficking and slavery — one of which is poverty. You can help stop trafficking and slavery by donating to development organizations that help refugees (like the United Nations Refugee Agency) or to organizations that work on countrywide aid and development, either in Libya or in the countries from which migrants are fleeing.

Two options for donations to broader humanitarian and development aid include the World Food Program, Save the Children, Oxfam, and Medecins Sans Frontieres, among others.

According to the IOM, smugglers have previously used Facebook Live to broadcast videos of imprisoned migrants in Libya — and, in particular, to send these videos to migrants' family members as a way of extorting money for their release. The IOM is asking social media companies to be ban the use of their services for the sharing of these types of videos. You too can help contribute to this advocacy by writing to Facebook to echo the requests of the IOM.

In addition to helping stop the slave trade in Libya, it is also important to help eradicate slavery around the world. There are many reputable organizations working hard to end worldwide slavery, including Free the Slaves, End Slavery Now, and the Polaris Project — you should consider donating to help contribute to their missions of ending modern day slavery.

You should also consider raising awareness of this issue among friends and family and on social media as a way of encouraging others to contribute to the fight to end slavery in Libya and beyond.

Free the Slaves provides a list of recommended ways in which you can spread the word about the issue. Some of these initiatives include sharing educational videos and books on the subject, following and sharing the organization's social media posts, and encouraging others to donate to anti-slavery organizations and initiatives.

This slave-free shopping guide from End Slavery Now is a good place to start, as it identifies companies which actively seek to prevent use of slave labor in their supply chains — and from which you should purchase goods if you wish to help contribute to ending the cycle of slavery.

Tragically, slavery is a pervasive global problem, and the recent migrant slave auctions in Libya serve as just one illustration of this very significant issue. Around 40 million people are enslaved worldwide, and urgent action needs to be taken to put an end to this horrific reality. You can certainly help contribute to stopping slavery in Libya, and beyond, by advocating and donating, and ensuring that as many people as possible know about the problem of modern day slavery.