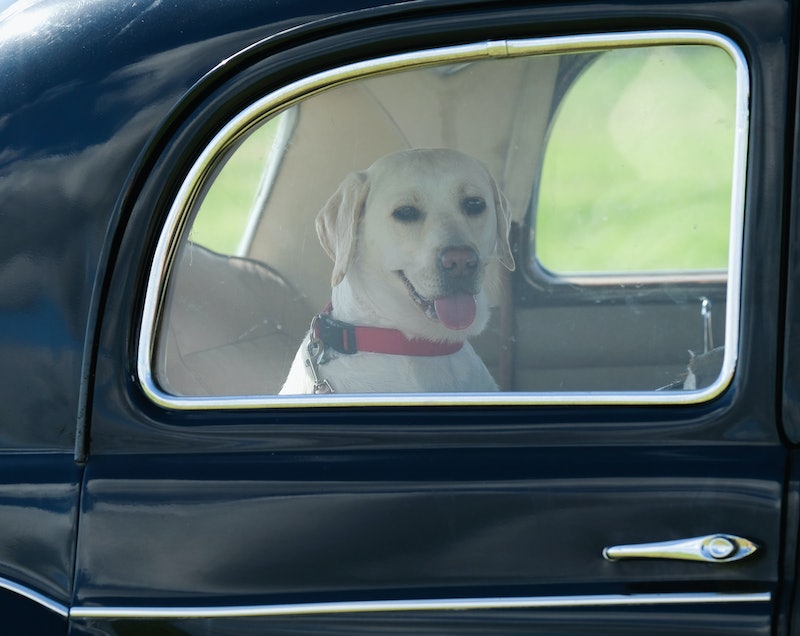 It's no secret that most dogs love going for a ride. However, some pups can end up tossing their cookies all over your backseat. If your fur baby gets queasy in the car, you're definitely going to want to know how to keep your dog from getting car sick. Because, whether it be human or canine, no one wants to clean vomit out of their car. Much like humans, some dogs get nauseous from motion. Unfortunately, Spot can't let you know that he's about to barf so you can roll the windows down..

Obviously, preventing your dog from getting car sick in the first place is preferable, but sometimes it can't be avoided. My dog gets car sick so often that I have towels covering my backseat, and I put yoga mats on top because they're easy to hose off. "Dog motion sickness is more commonly seen in puppies and young dogs than in older dogs, just as carsickness afflicts more children than adults," WebMD explained on its website.

"The reason for this is because the ear structures used for balance aren’t fully developed in puppies. This isn’t to say that all dogs will outgrow travel sickness, though many will." Unfortunately, my dog has not outgrown motion sickness. Same? Before you vow to never take Spot for a ride again, there are some things that can help decrease the chances your dog will come down with the sickness.

Some signs that Spot is about to get car sick include inactivity, listlessness or uneasiness, yawning, whining, excessive drooling, and smacking or licking of the lips, WebMD noted. Treating and preventing motion sickness in dogs is similar to treating it in people. For example, people who get car sick often need to sit in the front seat and face forward.

It's the same with dogs. If Spot likes to sit in the back of your SUV and gaze out the rear window, he may be more likely to get sick. However, because airbags can cause injuries in dogs, you might not want Spot to ride up front in the passenger seat. "Your dog will experience fewer nauseating visual cues if he faces forward while you’re traveling, rather than looking out the side windows, WebMD explained. "One way to guarantee this is by using a specially designed dog seatbelt."

You can also put your dog in a forward-facing crate during car rides. This way, if Spot does get sick, the vomit will be contained inside the crate versus being sprayed all over your car. Additionally, when you're planning to take Spot for a ride, you might want to refrain from feeding him beforehand. "Feed them two hours prior to leaving so that all the food is digested and out of the stomach before you leave," Dr. Mark Olcott, a veterinarian based in Maryland, told PetMD.

If you're going on a long trip, feed your dog small portions and then take him on a walk so his stomach has a chance to settle before getting back on the road. You can also talk to your vet about what types of over-the-counter medications can help Spot feel less queasy in the car. "Benadryl is another antihistamine that has less anti-nausea effects but is a fairly safe mild sedative that I often recommend for people traveling with dogs," Olcott told PetMD. "It can calm them down a bit and often will prevent motion sickness, especially if the vomiting is triggered when they get very anxious and worried."

If Spot is still getting car sick despite taking a vet-recommended OTC medication, talk to your vet about a prescription anti-nausea medication. While Spot will recover quickly after a car-sickness episode, cleaning vomit out of your car on the regular is pretty gross. The best way to prevent your dog from getting car sick is to avoid the car, however that's not always possible, which is why it's a good idea to have some go-to remedies you can turn to. #TheMoreYouKnow