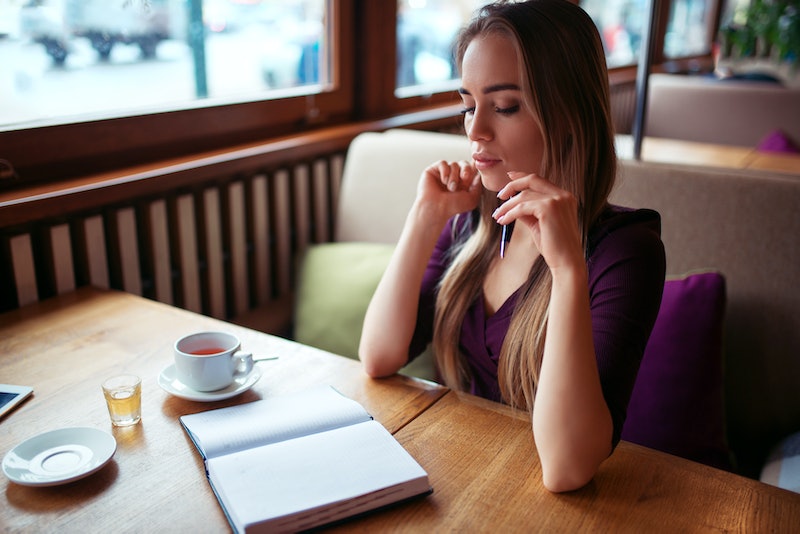 On season 7 of The Bachelorette, Ames Brown tells Ashley Hebert he learned to "throw the checklist out" when dating. He later elaborated in an interview with People, "I want the feeling that I’m in love, not a checklist." It's a common idea: that if we focus on a set of qualities we want in our partners, we overlook what we really want, which is someone to make us happy. Some experts say having a dating checklist can lead us to force someone into a predetermined role rather than build a genuine connection. But others say checklists can help us maintain high standards — and maybe that's a good thing.

"It is healthy to have a dating checklist to know what you're looking for," licensed psychologist Dr. Wyatt Fisher tells Bustle. "Research shows the more couples have in common on the things that matter most to them, the more likely they'll have a successful relationship."

But having too specific or superficial a checklist can backfire. "When putting together a 'dating checklist,' we must always leave room for fluidity, because life is certainly not perfect, and love always presents itself in the least predictable ways," Britanny Burr, Editor at Large at Psych N Sex and relationship expert, tells Bustle. So, here's the right way to create your dating checklist.

1. Think About Your Core Values

"The checklist should be around things that you hold most dear, such as your religious affiliation, financial practices, etc.," says Fisher. Love Strategist Cynthia D'Amour tells Bustle she recommends including "value-based character traits" like trustworthiness and open-mindedness, as well as lifestyle habits like whether they're adventurous or a homebody.

You'll know whether or not you're attracted to someone when you see them. You don't need a list to tell you. Pay attention to the feeling you get around them rather than the traits they have. "Any mention of hair color, eye color, boob size, or racial identity should be left off of your list completely," says D'Amour. "These traits don’t play a role in how compatible you are with another person."

What you're not looking for is just as important as what you are looking for. Abusive behavior, disrespecting your family and friends, lying, and cheating may all be on your dealbreaker list, Maryann Karinch, author of Date Decoder, tells Bustle. "You are settling if you accept and try to nurture a relationship when your dealbreakers are part of the party," she says. "Those things are important to you because they reflect your values, your deepest needs, and your hopes. You only hurt yourself if you let them come into your relationship."

4. Stay Open Minded About Things That Aren't On Your Dealbreaker List

There's a difference between refusing to compromise and being too picky. You need to be open-minded about things that don't actually matter to the relationship. "You are open-minded if [your date] does, says, or wears things that you aren’t crazy about, but he is a great guy at the core and you can accept (and maybe laugh about) things like that horrible frog tattoo on his chest," says Karinch.

5. Allow Yourself To Stray From The Checklist

Your checklist should be more flexible than your dealbreaker list, says Burr. "Checklists, vision boards, and manifestations are meant to act as guidelines, not drivers of self-shame should you stray from them," she says. "Perfectionism is not the key to happiness. Knowing what you want and making decisions to propel you in that direction is."

So, in short, your checklist should be a way to figure out what you want and make sure you don't sell yourself short. Just make sure it doesn't hold you back from anyone who could actually be good for you.