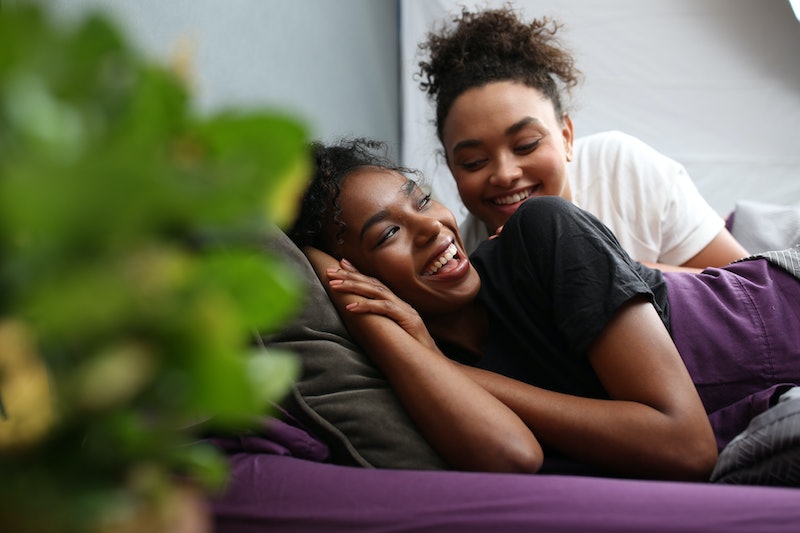 We’re always hearing that we could be having better sex, a better orgasm, or a better relationship. But how often do we hear the nitty-gritty of how we can actually better understand our deepest desires and most embarrassing questions? Bustle has enlisted Vanessa Marin, a sex therapist, to help us out with the details. No gender, sexual orientation, or question is off limits, and all questions will remain anonymous. Please send your sex and relationship inquiries to tips@bustle.com. Now, onto today’s topic: how to meet other women if you're a femme lesbian.

Q: “I need some dating advice. I’m a lesbian. I present as pretty average cis-gender white girl, and I’m on the femme side. I don’t offer a lot of visual cues to anyone who may be interested that I am indeed a lesbian. I have mostly met women online, where it is easy to make my orientation obvious. I’m fine with online dating, but I want to be able to meet women in person too. How do I make it clear that I’m a lesbian looking for sex and relationships with women? How do I find other lesbian women?”

A: Thanks for the question! This is an issue that many femme lesbians identify with. It’s frustrating to know that people constantly assume that you’re straight. Plus, trying to find another woman to date can feel like an even more frustrating numbers game at times. Here are nine tips for femme lesbians who are tired of feeling invisible.

I hope you can take some small comfort in knowing that you’re not alone! Queer invisibility is one of the most common frustrations that femme lesbians complain about. Even women who think they present as obviously gay still feel invisible at times. The unfortunate reality about dating, and really the world in general, is that we all have the tendency to make assumptions about other people. And we make a lot of assumptions too — about a person’s race, their gender, their socioeconomic status, their sexual orientation, their sexual interests, and so on. We all want to be seen for who we are, but sometimes that can feel practically impossible.

You didn’t mention this in your question, but I hope you’re not feeling any sort of pressure to change your appearance. One of the realities of being femme is that more people will make assumptions that you’re straight. But being femme is also an integral part of what makes you, you. Don’t change that! And keep in mind that even women who seem “obviously” lesbian have a different set of assumptions made about them that they have to deal with.

Assumption-making is so prevalent that I can guarantee you you’ve done it too. There have definitely been other femme lesbians you’ve met that you assumed were straight, and probably even some not-so-femme ones too. One way you can purposefully combat your own sexual orientation assumption-making is to try to ask questions. This also sends cues to other people to check their own assumptions. If you strike up a conversation with a woman you’re attracted to, come out and ask her, “People always makes assumptions about me, so I’m trying not to make assumptions about others. Are you into women?”

Bring It Up In Conversations

You can also bring up your sexual orientation in more subtle ways, by working it into the conversation. You can say something like, “I went on a few dates with a girl who [fill in the blank].” You can adapt that sentence to fit almost any conversation, especially if you’re fine with telling little white lies. “You like the Cavaliers? Damn, I can’t seem to escape Cavaliers fans. I just went on a date with a woman who was one of the most obsessed fans I’ve ever met.” Or you can ask a woman if she’s ever been to a well-known lesbian bar or event in your area. Try to come up with a few ideas that you can always keep in your back pocket. It might feel kinda silly to try to work lesbian “clues” into the conversation, but it will pay off when you talk to a woman who responds, “Oh wow, you’re into women too? I thought I was the only one here.”

Turn To Your Friends

Your friends can be great support systems in finding new romantic interests. Ask your gay and straight friends if they know any cute lesbian girls they could set you up with. If you have lesbian friends, ask them how they meet women in your area. Pair up with your lesbian friends and serve as each other’s wing women. At the very least, having a little more understanding and support can feel very comforting.

OK, here’s an obvious tip — go hang out at your nearest lesbian or LGBTQ bar. It can be such a big relief to know that the numbers game is stacked much more in your favor. Even if you don’t meet someone you’re attracted to, you can still meet new friends. It’s always good to expand your social circle, and a new friend can help you meet new women or just help you feel more supported in your quest.

Invisibility is a pretty big issue in the lesbian community, and there are a lot of women who feel the exact same way you do. See if you can find a lesbian specific dating event in your community. LGBTQ bars are always good places to turn to, but you can also look at community centers, local LGBTQ magazines or newsletters, or MeetUp.com.

If you can’t find an event in your community, why not organize one? It could be a great way to meet new women, make new friends, and give back to your community, all in one.

Realistically, online dating is probably going to be one of your best bets right now. Online dating is so popular, and a lot of people feel more comfortable putting themselves out there online as opposed to in person. You may even find it refreshing at times to fully put yourself out there. You can definitely make more of an effort to meet women in real life, but don’t write off online dating altogether. You can even write on your profile that you’re looking to move things into the real world as soon as possible, and only using online dating to try to meet women.