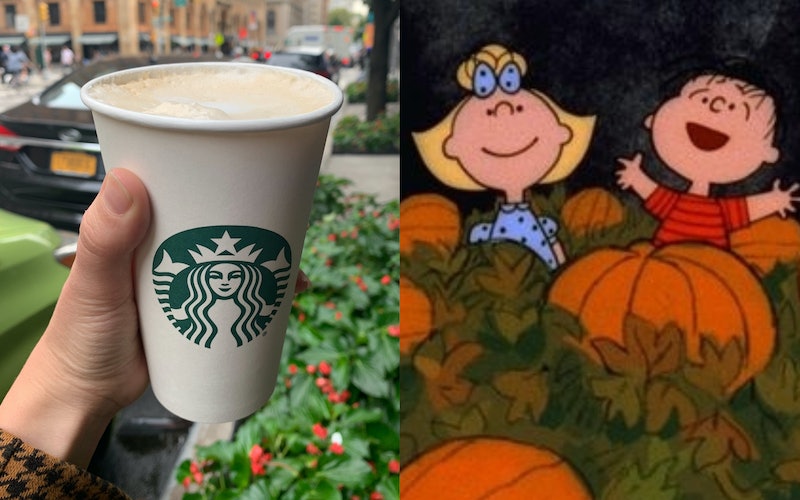 The Pumpkin Spice Latte has been available in the U.S. since , so if your blood isn't 98% pumpkin by now, then props to you for being able to resist the Starbucks mermaid's siren call. For those of us who are more autumnally-inclined, though, there's pretty much no limit to what we will innovate with pumpkin — and this year, even your beloved PSL isn't safe from getting tweaked. If you're looking to shake things up, you can learn how to order the "Great Pumpkin" Latte on Starbucks' secret menu, and truly live your fullest, most fall-forward dreams.

First, some background on the "Great Pumpkin" Latte. Odds are by now you've seen It's The Great Pumpkin, Charlie Brown, the iconic television special based on Charles M. Schulz's Peanuts comics, enough times to recite it by heart. While beloved character Linus never succeeds in his quest to find the "Great Pumpkin," 2019 is giving him a second shot to find the caffeinated, millennial version, in the form of this latte Bustle created for the secret menu in its honor. (Whether it will be delicious enough to get you a coveted invite to Violet's Halloween party? Still TBD.)

To channel Charlie Brown and order the "Great Pumpkin" Latte, you can make an order in one of two ways. The first is to order via the mobile app. Using the app, you can customize a Grande Pumpkin Spice Latte so that instead of including the customary four pumps of Pumpkin Sauce, it only has two; then, toggle down to Toffee Nut Syrup (in honor of it being based on a Peanuts comic!), and add two pumps of that. The second way to order is to ask your barista for a PSL, but to replace half the Pumpkin Sauce with Toffee Nut Syrup. Make whatever other customizations you need based on your dietary preferences, and voila! A "Great Pumpkin" Latte, combining pumpkin and toffee nut in a ridiculously pleasing way.

It might not seem like a drastic change on your beloved PSL, but here at Bustle, it was quite the hit — the toffee nut does a really great job of tempering the sweetness of the pumpkin, making a more balanced drink (unlike, say, Charlie Brown's football skills). Lifestyle Editor Melanie Mignucci described it as "subtle, but elegant," and Senior Lifestyle Editor Gaby Moss called it a "November drink," as it was "more wintry than a PSL, but more autumnal than a Chestnut Praline Latte," making it the ideal transitional beverage.

This isn't the only shakeup that's hit the internet this PSL season — just this week, the secret menu "Cinderella" Latte captured the hearts and tastebuds of pumpkin lovers across the U.S. And there is, of course, the newest pumpkin beverage to officially hit the Starbucks menu, which is anything but secret — the Pumpkin Cream Cold Brew, which is way more coffee-forward and caffeinated than the PSL of yore. The moral of this pumpkin-flavored story is, no matter what kind of vibe you're feeling this autumn, Starbucks has a pumpkin drink for it. Just make sure to keep you eyes peeled for the shadow of the "Great Pumpkin" when you order a latte in its name.

More like this
The Best Memes & Tweets About The Discontinuation Of The Choco Taco
By Alexis Morillo
I Tried The $20 TikTok Viral Oishii Strawberries — Here's What I Thought
By Sophie Hanson
Trust Me, Pickle Martinis Are The New It Drink Of The Season
By Emma Carey
On TikTok, A ‘Snackle Box’ Is The Best Way To Pack Charcuterie On-The-Go
By Meguire Hennes
Get Even More From Bustle — Sign Up For The Newsletter