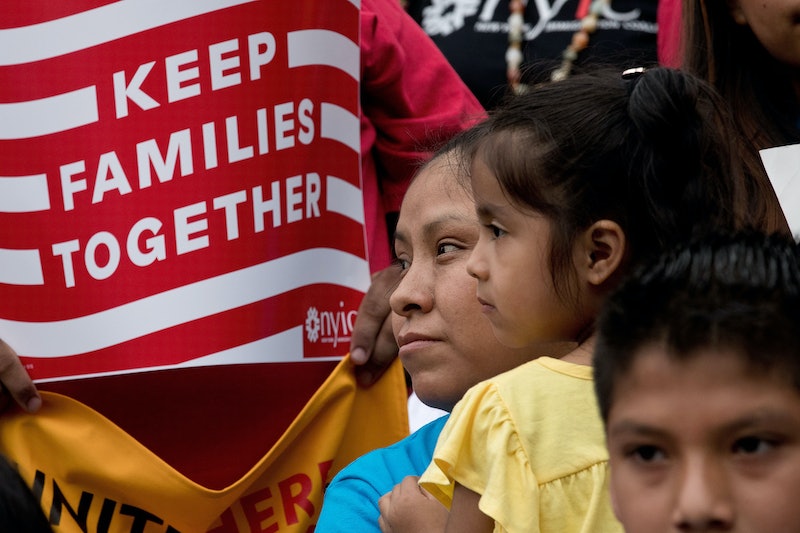 As part of its "10 Actions in 100 Days" activism campaign, the Women's March announced We Belong Together, its seventh action. The We Belong Together initiative focuses on the power of families, children, and unity in the resistance movement. It particularly centers on resisting immigration policies that threaten to separate families. And because the Women's March has provided a helpful guide to implementing its seventh action, participating is easy.

The We Belong Together initiative especially focuses on the power of children to perpetuate unity and resist unjust immigration policies. Last week, the initiative was kicked off with a "Kids Caravan" of 40 Latinx and Black children who traveled from Miami to Washington D.C. to call attention to harmful immigration policies. Now, the March is asking everyone to participate in a "We Belong Together Kids Week of Action" in order to further empower children as activists and to promote unity across communities in the United States.

To participate in the We Belong Together Kids Week of Action, the Women's March lists four specific activities in which you can engage. First, the March encourages youth to create "unity circles" around places you wish to make "safe and welcoming for all." Unity circles involve children (and adults) linking arms to symbolize safety and solidarity in these spaces. You can participate in this action by encouraging youth in your community to sign up to host unity circles and to educate them on the premise of the circles and the We Belong Together initiative. Furthermore, if you are a leader in your local community (for example, a teacher or a local council member), you can actively seek out unity circles to join and, when you do, "commit to fighting for policies that support and defend young people in their communities."

Secondly, the Women's March encourages adults and children alike to educate themselves on the consequences of discriminatory public policies, particularly for immigrants and people of color. The March has provided a helpful and extensive list of educational resources on its website, which you can peruse and use to educate others on the harmful impacts of discrimination.

The third activity the Women's March encourages as part of its We Belong Together initiative consists of writing postcards to elected officials asking them to "support laws that keep families and communities together." Adults can encourage children to write postcards with their friends or as part of a classroom activity and help them ensure that their postcards are sent and delivered to the correct legislative office. The March has a handy postcard template on their website that children can download and color or they can design their own.

Finally, the Women's March requests that families share their We Belong Together activities as a means of drawing attention to the action and as a way to push legislators to fight for policies that help children and families. The March asks that people share pictures of themselves participating in unity circles, holding a banner that says #WeBelongTogether, and/or share pictures of themselves and their children with signs saying "Families Belong Together" or "Don’t Take Kids' Parents Away."

Overall, while the seventh action of the Women's March is youth-centered, there are many ways in which adults can participate and encourage youth to become activists in their own right.