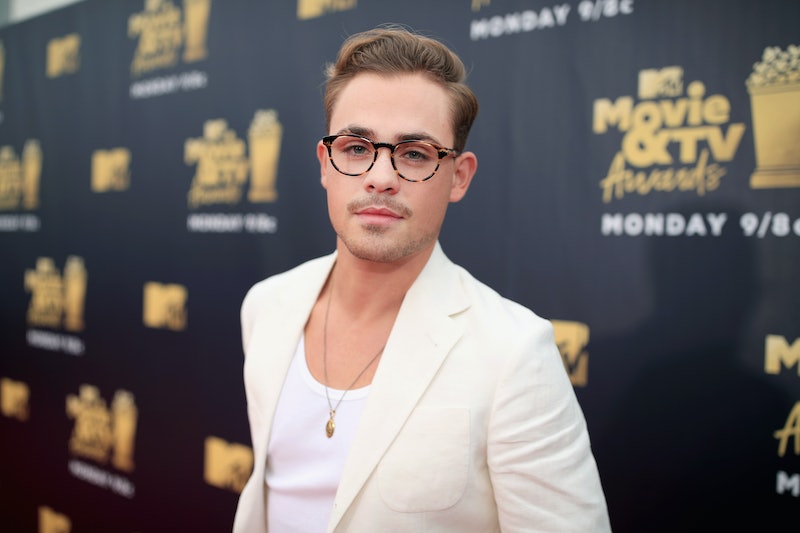 This one's for any Stranger Things fans who have been wondering how to pronounce Dacre Montgomery's name. The Australian actor's moniker might appear to be somewhat intimidating at first, but it's really not that hard to say. Actually, Montgomery explained the pronunciation of his name in a GQ interview published on July 12. After you hear how to say it, you'll never be able to mess it up again.

Ever since Stranger Things Season 3 dropped, many fans have been tweeting about Montgomery's name. Like one person posted on Twitter on July 14, "Is Dacre Montgomery’s name pronounced like daiquiri?" Unfortunately, it's not said like the fruity alcoholic beverage perfect for beach days. Can you imagine if it was? That would be pretty amazing, but the pronunciation is far from "daiquiri."

During his GQ chat (you can watch it below), a fan tweeted the actor known for playing Billy Hargrove in the Netflix series, "How DOES one pronounce Dacre of Dacre Montgomery?" Montgomery explained,

"So Dacre is just acre, like five acres to the next farm, right. A unit of measurement, acre."

There you have it. That's pretty easy to remember, isn't it? Next time you get ready to say his name just think to yourself, "Day-ker."

Actually, Montgomery's family is connected to some historical figures, which is how he got his name to begin with. According to trivia shared on his IMDb profile, the 24-year-old star "is descended from Charles II of England (1630-1685), who was King of England, Scotland, and Ireland, from 1660 to 1685, and King of Scotland, from 1649 to 1651. This descent is through Charles' daughter, Anne Lennard, Countess of Sussex."

IMDb's trivia continues, "His name, Dacre, is after his descent, on his mother's side, from the Barons Dacre of England (a Baronship that traces back to 1321, when Ralph Dacre became Lord Dacre)."

Well, Montgomery confirmed the internet movie databases's trivia to GQ. "Yep, that's all correct," he said. He also explained that his mom's family is descendants of the Barrett-Lennard's. Montgomery continued,

"So, if you see here, Charles' daughter, Anne Lennard, I'm assuming that's the connection. But I think my name is originally Celtic and then French, and there's sort of different derivatives, I guess, of that."

To learn more about the history of Montgomery's family, the European Heraldry has a detailed map and description of everyone.

Even though some fans know all of the ins and outs of Montgomery's name, they still aren't entirely comfortable with the pronunciation. One fan tweeted on July 16, "It doesn’t matter that I’ve learned that Dacre Montgomery’s name is just pronounced like acre with a D attached to the front. I keep saying it in my head like some f*cking tool adding accents where there are none."

Another fan hilariously shared on Twitter on July 13, "I now know how to pronounce Dacre Montgomery correctly. But he will always be 'Daquiri' in my heart."

There are other fans who feel even more accomplished and well educated thanks to Montgomery's lesson on his name. "I've finally learned how to say @dacremontgomery's name correctly thanks to a GQ interview," another Twitter user posted on July 13. "I’ve been butchering the pronunciation of Dacre for the longest time. I am so glad I can say it correctly now. Probs still butchered slightly tho bc I’m American & not Australia lmao."

And there's this individual who honestly tweeted on July 14, "things i shouldve learned today: business studies stuff things." They continued, "i learned today: how to pronounce dacre montgomery correctly."

It seems like Montgomery gets questioned about his name a lot, but he definitely has the explanation down pat. Just remember, his name is pronounced like "acre" with the letter D attached to the front.

More like this
'Stranger Things' Finn Wolfhard Is “Proud” Of Noah Schnapp For Coming Out
By Sophie McEvoy
Rachel Fuda Gave Birth Just Weeks Before 'RHONJ' Season 13
By Brad Witter
All The Best Celebrity Reactions At The 2023 Grammys
By Brad Witter
What Is Mary J. Blige’s Net Worth? The 9-Time Grammy Winner Is Doing “Just Fine”
By Hugh McIntyre
Get Even More From Bustle — Sign Up For The Newsletter
From hair trends to relationship advice, our daily newsletter has everything you need to sound like a person who’s on TikTok, even if you aren’t.