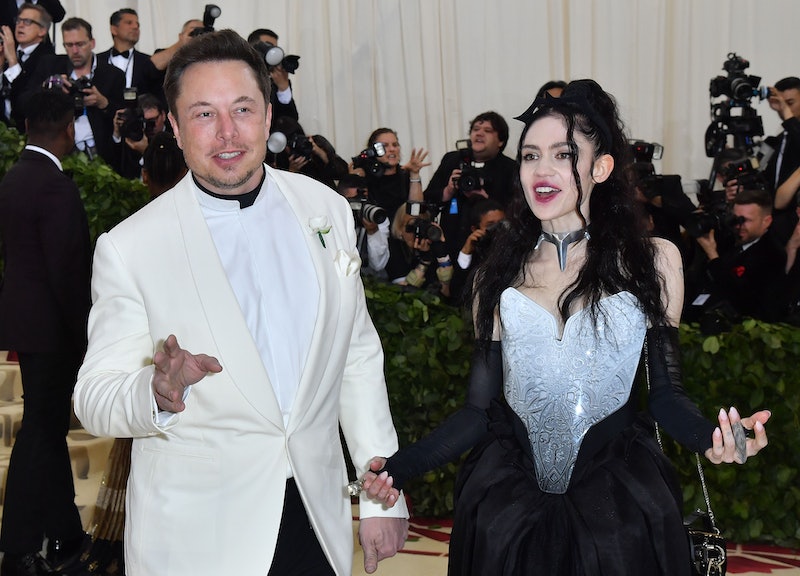 Perhaps this will clear up any future roll call mishaps in school: Elon Musk and Grimes have explained how to pronounce X Æ A-12 — if only they could agree. Musk and Grimes, real name Claire Elise Boucher, welcomed their first child together on May 4, and the name of the newborn has served as a source of confusion for many. After a few days of non-stop debate, both parents have weighed in on how to pronounce their new son's name; unfortunately, they seem to have very different ideas.

“First of all, my partner is the one that actually came up with the name,” Musk said during an interview on the podcast The Joe Rogan Experience uploaded on May 7. “She’s great at names.” When pressed on pronunciation, Musk explained, "I mean, it's just X, the letter X. And then the Æ is pronounced like 'Ash.'” He added, “And then A-12 is my contribution.” As Grimes had previously explained on Twitter, A-12 is in reference to the couple’s “favorite aircraft," built for the United States Central Intelligence Agency, also known as Archangel 12. Musk dubbed the aircraft “the coolest plane ever” in his interview with Rogan.

Musk’s explanation comes after Grimes outlined the full origins of X Æ A-12 on Twitter on May 5. Per the “Oblivion” singer’s tweet, the X stands for “the unknown variable,” Æ, her Elvin spelling of AI, represents her love for artificial intelligence, and A-12 references the couple’s favorite aircraft and Grimes’ “favorite song.” She further elaborated in an Instagram comment on May 7 and wrote, “It’s just X, like the letter X. Then A.I. Like how you said the letter A then I.” So...is it "X-ash" or "X-ai"? We may never know.

Musk and Grimes have been linked since 2018. While X Æ A-12 is the first child for the two, Musk has five other children from a previous marriage. In an interview with Wall Street Journal Magazine in March 2019, Grimes publicly declared her love for the Tesla mogul and admitted that she was “simply unprepared” for the public attention that their coupling had garnered. She told the magazine, “Look, I love him, he’s great.” Later in the interview, Musk told WSJ Magazine that he loved his partner for her “wild fae artistic creativity and hyper intense work ethic.”

Grimes first sparked pregnancy rumors in January after she shared a now-removed topless Instagram photo with an image of a baby on her stomach. The singer responded to a comment about her uncensored nipples and wrote, “I thought about censoring them for a hot minute haha (this may get taken down anyway) but the photo is so much less feral without the nipples. Plus being knocked up is a very feral & war-like state of being. Might as well be what it is.”

Here's to hoping X Æ A-12's upbringing will be a less war-like state of being. And that his parents can reach an agreement on how to pronounce his name sometime soon.