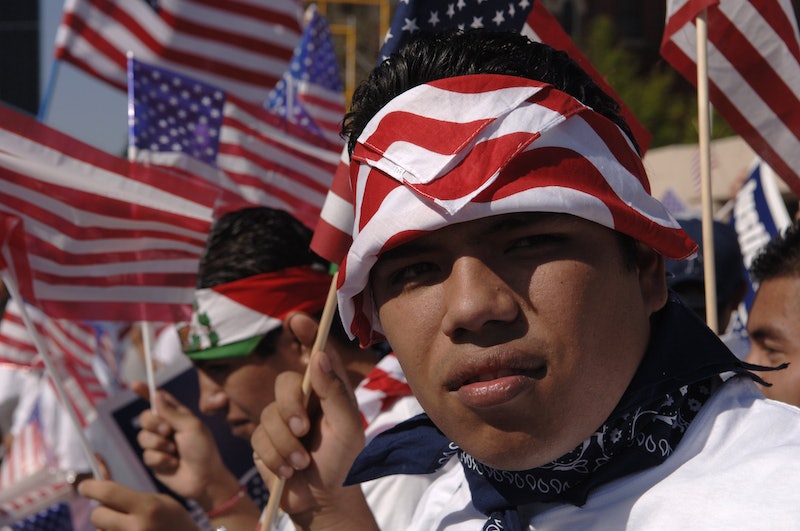 While a national fight over immigration has been going on, there's been a separate battle taking place on the state level. In Texas, the battle over the state's anti-sanctuary cities bill has taken tensions to a new level. After passing through Congress and being signed by the governor, Senate Bill 4 has become law and is set to take effect in September. However, on the last day of Texas' legislative session, protestors showed up at the capitol to make their voices heard. You may be wondering how you can protest Texas' anti-sanctuary city SB4.

In February, President Donald Trump signed an executive order to increase the number of Immigration and Customs Enforcement (ICE) officers in the United States, expand who is eligible for deportation, and deny funding to sanctuary cities that don't actively enforce deportation. Texas' SB4 enforces the federal guidelines on a state level by holding criminal suspects for potential deportation. The law is basically considered a "show me your papers" bill because it allows police to ask people about their citizenship even during traffic stops. In fact, it has the familiar racial profiling potentials that led New York to reduce its stop and frisk policy.

People in Texas are not happy about the new law, including many families that could potentially be ripped apart because of it. And they showed up to the Texas capitol on the last day of the legislative session to take a stand in protest.

Here's how you can join the fight to resist the enforcement of SB4 in Texas.

Although the bill has passed, you can still contact legislators in Texas to let them know how harmful the bill will be for people facing deportation, as well as for their communities.

There are countless stories of how deportation has broken up families, and there are certainly many people concerned about it happening to them. Consider sharing stories of those who may be affected by SB4. By recognizing that they are real people facing a real problem, perhaps legislators will understand how harmful the bill will be.

Talk to others about SB4 and share with them how damaging it will be for the Texas community. As more people are set on resisting, lawmakers will be forced to take note of the opposition. Stand in solidarity with Texas residents on social media and share their pictures of their protests to spread the word. Share stories with the hashtag #StopSB4 on Twitter to join the conversation.

Just because the bill has passed, it doesn't mean the fight is over. The piece of legislation doesn't actually take effect until September, so from now until then, the fight continues. Keep an eye out for future protests throughout the summer and, especially if you're in Texas, think about making your way to Austin or other locations to join in on a rally.

Consider sending funds to organizations that work to protect immigrants. The ACLU often provides lawyers to those facing deportation. In addition, the Texas Civil Rights Project is suing to stop SB4 from taking effect. You can donate on the site to #StopSB4.

After seeing successful passage in Texas, it wouldn't be surprising if other states introduce similar laws. But it doesn't have to get that far. If the opposition resists the potential crackdown on deportation now, it will set a precedent for other cases and possibly deter other legislators from enacting similar measures. For now, the best thing you can do to protect immigrants is to speak up and make your opinions heard by your representatives.