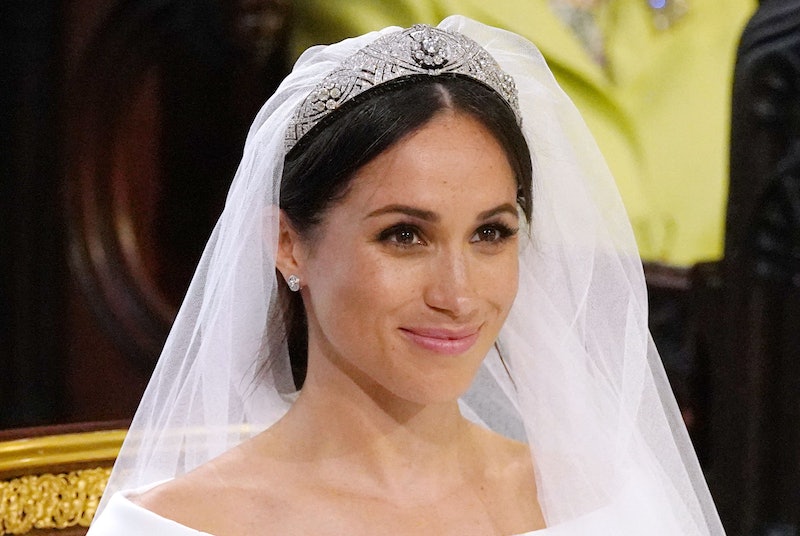 Meghan Markle's wedding day look will go down in history. From her elegant and simple wedding dress designed by Givenchy's Clare Waight Keller, to the beautiful veil she had that was embroidered with the flowers of commonwealth countries, it was an unforgettable ensemble. But for many beauty fans, it was her makeup that was most worth talking about. The Duchess sported a brown soft smoky eye, pink neutral lipstick, and an enviable glow. Luckily, her makeup artist Daniel Martin has just revealed how to recreate Meghan Markle's wedding day look on British TV, meaning you can now rock it yourself.

Yep, that's right, Martin, who also paints the faces of celebrities such as Jessica Alba and Nina Dobrev, appeared on none other than Lorraine to reveal the exact steps to creating Meghan's beautiful look. And luckily, the steps are totally easy to follow. I've popped in a few product recommendations I like too, which you can easily incorporate into the creation of this subtle look.

He begins by prepping the skin with his skin regime, and encourages people watching to use their own routine too. He then applies a small amount of foundation with an eyeshadow brush. Martin says that it's best to start in the middle of the face, commenting, "it's better to start here and blend out so you can gauge the coverage you're getting." After the foundation, it's time to concentrate your attention on concealer. Martin first uses his fingers to apply the concealer, then uses a sponge to blend out.

Now it's time to incorporate a little glow by adding some highlighter to the chosen foundation and applying it with the same brush. "For Meghan's wedding, what I did was mixed the luminiser with foundation so it integrated the glow," the makeup artist revealed. After this, he adds some setting powder to the t-zone, and only the t-zone. Why? "I just really concentrated the powder right in your T-zone because I really want this radiance to come through," explained Daniel.

Next onto the eyes. Martin applies a dark eyeshadow with his fingers and then blends it out with a brush, before adding a lighter hue into the corners. He then adds mascara onto the top lashes, as well as the bottom, and to "add a bit of drama," he also lines the bottom lashes with a touch of liquid liner.

He finishes off the look by shaping the face with a light bronzer, and applying a high pigment gloss to the lips.

Who knew getting royal-worthy makeup could be so seemingly straightforward?!

More like this
Superdrug Now Sells UOMA’s Sister Brand
By Justine Knight
This Scandi Beauty Brand Is Basically Hygge In A Bottle
By Justine Knight
Introducing Beauty Beat, The UK’s First Luxury Beauty Event For Women Of Colour
By Justine Knight
Why TikTok's 15-Minute Cleansing Challenge Isn't All It's Cracked Up To Be
By Rebecca Fearn
Get The Very Best Of Bustle/UK