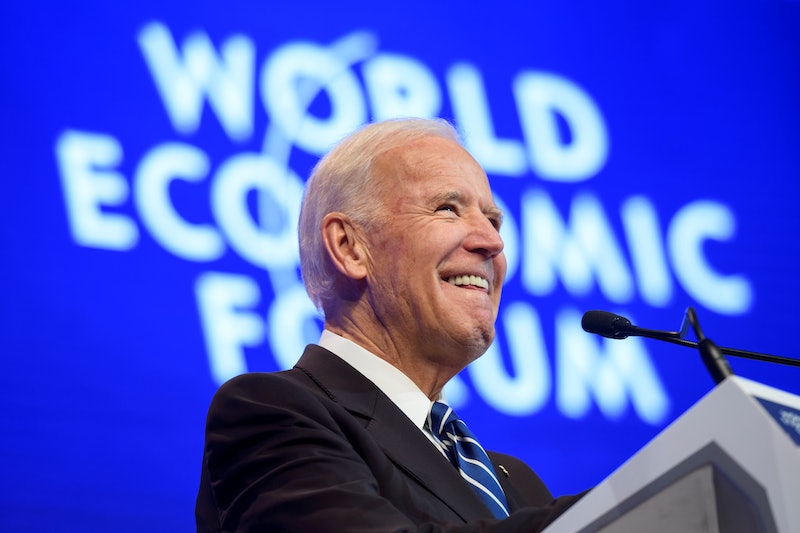 There are many reasons the Obama administration will be missed come Jan. 20, and one of those is undoubtedly Joe Biden. A politician for almost half a century, Biden didn't spend much time reflecting on his vast political record during his speech at the World Economic Forum in Davos, Switzerland, early Jan 18. Instead, he spent the majority of what was his last speech as vice president looking toward the future, urging NATO nations to unite against Russian encroachment on democracy. Did you miss the speech? Since it took place well outside of waking hours for most Americans, you're not alone. Thanks to modern technology, you can watch it over and over again. Here's how to rewatch what was essentially Biden's farewell speech.

Since this speech took place outside of the U.S., it is not officially his farewell speech. Vice presidents don't normally hold farewell addresses, since that honor is left to the president. (Besides, President Barack Obama's address on Jan. 10 is one tough act to follow, as president-elect Trump may discover come Inauguration Day.)

In fact, as TIME reports, Obama was only the 10th president in American history to deliver a dedicated farewell address to the country. Biden's speech in Davos wasn't a break with tradition, per se. But the attention it is drawing is a testament to how much many people want a closing word from the outgoing vice president.

The World Economic Forum posted Biden's speech in its entirety to the organization's official YouTube page shortly after the speech was over. However, CNBC, whose Jay Yarow called the speech "epic," and Business Insider, whose Brett LoGiurato called the speech "a stark warning," both offer short highlight videos of the speech on their websites. The Guardian also offers a snippet of the speech, for those who can't spend 30 minutes watching it right now, highlighting Biden's remarks on how "the top one percent's not carrying their weight." While Reuters Davos' excerpt focuses on Biden's criticisms of Russia:

Biden's speech inspired reflection on what the West's "liberal world order" really means, what the U.S.'s place in the world will be going forward, and what values really inspire a nation that will soon have Donald Trump as its president. And despite Biden's assertion otherwise, much of the speech can be read as a response to the president-elect and his incoming administration directly. Did Trump catch Biden's remarks? Unless he comments on it on his Twitter feed, we may never know. But if this is a speech you're not willing to miss, the World Economic Forum and several news outlets are able to get you in the loop.